"They are good for boys' cold fingers at suppertime on winter nights." 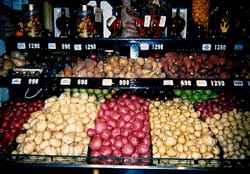 What could "they" possibly be? Bowls of oatmeal? Cups of hot cocoa? Gloves? The suggestion, which comes from the 1873 book of advice Common Sense in the Household by Marion Harland, refers to -- what else? -- baked potatoes.

We all know the feeling: take the hefty, hot Idaho off the coals, split it open, sneak a bit of butter (a big bit) into it and grind some pepper over it. It's comfort, it's warmth, it's manna, it's earth, it's heaven. And, as with all things, it's not the only way to do it. Even on such a simple theme as baked potatoes, there are variations. Some cooks butter and salt the skins before baking to prevent it becoming too crisp and to enhance flavor for the skin-nibblers. Others let the baked potatoes rest before eating, or wrap it in a napkin, or put it in a saucepan and shake it around a bit before serving. By substituting olive oil for butter and performing a few abracadabras, some of today's "special occasion" restaurants have elevated the humble tuber to the heights of fashion (and priced it accordingly).

Of course, baking isn't the only way to cook what has been called the "Houdini of Vegetables." As M. F. K. Fisher once said, "There are several thousand things to do with potatoes." Some of them have names which reveal their universal appeal: Irish Colcannon, Catalan Potato Frittata, Scalloped Potatoes Jefferson (said to be the President's invention), Potatoes Aioli, Gnocchi, Gratin Parmentier, Frigideira, Krupnik (not to mention a plethora of pommes de terre: Anne, Annette, Georgette, Dauphine). There is even a potato layer cake which James Beard considered "one of the best of that type of cake in the whole gamut of pastries."

Although the potato is an American vegetable, cultivated for centuries in Peru and South America, it first came to North America in the 1700's when it was brought over by Irish Presbyterians. Records show the first plantings in Londonderry, New Hampshire. Soaked in vinegar, potato slices were once used as a remedy for scurvy. Their most honorable mention in these early years comes from Harvard College, where potatoes were on the dinner menu during the installation of Harvard's new president.

Today, the tubers are grown just about everywhere, mostly in Idaho, Washington, Maine and Oregon. Among the most colorful names are Russet Burbank, White Baker, Rose Fir, Blue Carib, Yukon Gold and Yellow Finnish. Depending on the statistician cited, each person in this country consumes either 75 or 120 pounds of potatoes (or somewhere in between) annually. It must be admitted that the great gastronome Brillat-Savarin had a discouraging word for potatoes -- three words in fact -- when he said "None for me." But, most cookery writers and chefs defend potatoes with descriptions of paean proportions.

"I have always been fascinated by the potato," admitted James Beard. Sheila Hibben wrote, somewhat protectively, "...the potato, like man, was not meant to dwell alone." Rosalind Creasy sighs "Potatoes, comforting potatoes." And M. F. K. Fisher revealed that "For me, a plain baked potato is the most delicious one...It is soothing and enough." But perhaps it is the Irish who should have the last word. "Only two things in this world are too serious to be jested on," say the Irish, "potatoes and matrimony."

In a large saucepan, bring the stock to a boil. Add the onion, carrot and potato and cook for 15 minutes. Remove half of the mixture to a food processor and pur»e. Return to the pan and reheat with the remaining soup. Season with salt and pepper and sprinkle with chives.

Roasted Lamb on a Bed of Onions and Potatoes
serves 8

Preheat oven to 400ÉF. In a large skillet, heat two tablespoons of the oil; saut» the onion until tender. Combine half the garlic and parsley with the sliced potatoes. Grease a baking dish with the remaining tablespoon of oil. Place a layer of potatoes in the dish, followed by a layer of saut»ed onion. Pour in just enough broth to cover. Loosely cover with foil and bake for about 25 minutes. Uncover and bake for 30 minutes more, checking to see if the mixture is still moist. (Add more broth if dry.) Meanwhile, make slits in the lamb with the point of a knife. Coat the lamb with the remaining garlic and parsley; massage into the lamb. Place the lamb over the potato mixture and bake for another 25 minutes. (A meat thermometer should register 135ÉF.) Remove from the oven and let rest for 10 minutes before slicing. Serve slices of lamb on a bed of onions and potatoes.

To make stuffing: Heat the oil and saut» the garlic and spinach for about three minutes. Combine with the potatoes and cheese. Season with salt and pepper. Blot the trout dry and sprinkle the cavities with salt and pepper. Preheat the oven to 400ÉF. Oil a baking dish and sprinkle with shallots. Fill the trout with the stuffing mixture and place them side by side on the baking dish. Sprinkle with wine and cover with parchment or foil. Bake for 15 minutes; uncover, dot with butter, and bake for another 5 minutes.

Bring the wine and broth to a boil in the bottom of a steamer. Place the potatoes in one layer in the top of the steamer and cover. Cook for about 13 minutes. Remove the potatoes and sprinkle them with oil and tarragon. Season to taste with salt and pepper.