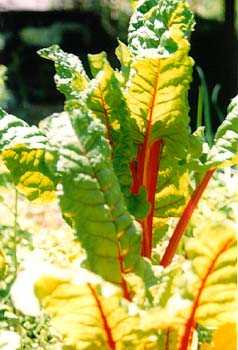 Even those of us who admit to loving spinach may never be able to like it. It is not spinach the vegetable that we resent, it is spinach the authority figure. Spinach reminds us of all the "supposed-to's" of childhood. Through no fault of its own, spinach has become a didactic vegetable, used for symbolic value as the good and the true, never the beautiful and certainly not the delicious. Memories of spinach are nseparable from this message: spinach is not just a good idea; it's the law. Other vegetables, like corn on the cob or potatoes, may have happy or even neutral connotations, but spinach means business. Food, it lectures us, is a system of nourishment: there are some things you must eat and spinach is one of them.

When we discover, therefore, that spinach isn't perfect because its oxalic acid blocks the absorption of calcium and iron, we can't help feeling vindicated. We always knew that spinach wasn't so great, we congratulate ourselves; we were right about that. We might have been right about some
other things too. Strong opinions have always been the lot of this emotion-charged vegetable. The famous seventeenth-century botanist and salad maker, John Evelyn, wrote
that spinach was not often included in salads and "the oftener kept out, the better." In his ensuing series of backhanded compliments, he went on to praise spinach as useful in a "Sick Man's Diet" and also "profitable for the Aged." According to one old French proverb, "spinach is the broom of the stomach."

Another traditional view, which likens spinach to sealing wax, comes close to being a compliment. Like wax, spinach takes on the tastes and characters of its surrounding ingredients, reflecting and preserving their virtues. It has long been a favorite of innovative chefs, who know how to take advantage of this trait. Perhaps one of the nicest images of spinach can be found in the pages of Thackeray's Pendennis, where his fictitious but adventurous chef, Alcide, describes one of his creations: "a little roast lamb, which I laid in a meadow of spinaches."

It might be possible to fill a real meadow with the diverse greens that bear the name spinach but that are not, in fact, in the same family. New Zealand spinach, a warm-weather green, came to England in 1770 with the scientist Sir Joseph Banks. Chinese spinach is a slightly sweet, highly nutritious
green, known in India for centuries. Its other names are amaranth, jacob's coat, and tampala. Ceylon spinach is a mucilaginous green, similar to okra, whereas water spinach, also called swamp cabbage, has young leaves that can
be used like spinach. 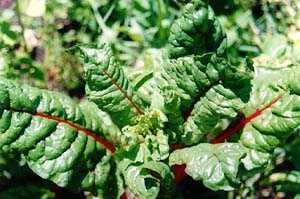 Swiss chard, also known as spinach beet, is actually an offshoot of the beet family. It is one of the most successful substitutes for spinach. The big, ruffled leaves can be used to wrap around stuffings or small fish for steaming or roasting on the grill. Its firm, crisp stems, which may be cooked separately range in color from white to pink to ruby red. But none of these spinach stand-ins is the real thing-the leafy member of the goosefoot family that first grew in southwestern Asia, though no one knows exactly when. Some clues as to its age do exist: the Greeks didn't
know about spinach, nor is there a Hebrew term for it, but the Persians called it aspanakh. Because some botanists have proposed Spain as its place of origin, it has also been referred to as "the Spanish vegetable." Bloomsdale, Melody, and Wolter are some of today's spinach varieties. All
have graceful slender stems and tender leaves, the essence of green.

All spinach really needs is a vigorous swish through cold water to remove the almost intractable dirt and it is ready for action, as well as interaction, in salads, stir-fries, soufflČs, stuffings, soups, pies, gratins, pasta, purees, and casseroles. The greatest challenge to spinach popularity in this country came a century ago, when its nutritional values were extolled not only by dietitians but also by politicians. Certain members of Congress, perhaps attempting to associate themselves with something wholesome, began distributing spinach seeds to their constituents. Fortunately for spinach, along came Popeye.

Market Selection: Smooth-leaf, curly-leaf, and New Zealand spinach may be used interchangeably. Swiss chard can be found with red or white stems. Spinach should have deep green, unblemished leaves. Swiss chard leaves should be glossy, with heavy white or red stems.

Storage: Wrap spinach and chard in paper towels and enclose in plastic wrap.
Refrigerate for up to 4 days.

Nutritional Value: Both are excellent sources of vitamins A and C, potassium, and iron.
60 calories per cup

Cooking and Handling Notes: The best way to clean spinach and chard is to fill a large bowl with cold water and 2 tablespoons of vinegar or lemon juice. Hold the bunch by the stems and swish the leaves in the water several times. Grit will sink to the bottom of the bowl. Pat dry and use.
The stems of Swiss chard should be allowed a longer cooking time than the leaves.

Basic Cooking Methods: Wash spinach or Swiss chard and shake off any excess water. Place in a shallow saucepan with only the water that is clinging to the leaves. Cook, covered, for about 3 minutes, or until wilted.
Steam for about 3 minutes.

Combine all of the sauce ingredients until well blended. Cover and refrigerate until ready to use. Blanch the chard leaves in a large pot of boiling water for 3 minutes. Drain them and spread them out. Wrap each prawn in a slice of prosciutto. Sprinkle with lemon juice. Place the prawn on the upper part of a chard leaf. Fold the sides in and roll the prawn in the leaf; place it in the steamer basket. Repeat the procedure with the remaining prawns. Steam, covered, for 8 minutes. May be served hot, warm, or chilled with a
mustard-dill sauce.

In a large pot, cook the bacon until most of the fat is rendered but the bacon is not crisp. Remove some of the fat with a baster, if necessary. Remove the stems from the chard leaves and chop them coarsely. Cut the leaves into chiffonade. In the same pot, cook the chard stems with the
garlic, onion, and rosemary until the vegetables are soft, about 6 minutes. Stir in the chard leaves and potato and cook for 3 more n-minutes. Add the stock and bring to a boil. Partially cover and reduce to a simmer. Cook for 10 minutes; add the beans. Cook for another 10 minutes and season with salt and pepper. Stir in the parsley and serve.

In a medium saucepan, heat the butter. SautČ the onion and celery until soft, about 5 minutes. Stir in the coriander, curry, and apple; cook for 5 more minutes. Add the spinach; stir and cook until wilted. Add the stock and rice. Bring to a boil; reduce the heat, partially cover, and simmer for
15 minutes.

Puree in the food processor and season with salt and pepper.

In a skillet, heat the oil. SautČ the shallot with the pepper flakes for about 2 minutes. Add the raisins, soy sauce, and vinegar. Bring to a boil and cook until almost all of the liquid has evaporated. Add the spinach and cook just until wilted. Season with salt and pepper and sprinkle with sesame seeds.

In a medium saucepan, heat the butter. Cook the green onion until wilted; stir in the pear, spinach, and nutmeg. Cook for 2 minutes. Add the stock and bring to a boil. Lower the heat and simmer, partially covered, for 15 minutes.
Puree the soup with half of the cream and season with salt and pepper. Combine the remaining cream with the Roquefort until smooth. Reheat the soup gently and serve with a dollop of Roquefort cream on each serving.

Penne with Spinach and Lamb Sausage
serves 6 to 8 as a first course; 3 to 4 as a main course

In a medium skillet, heat the oil. SautČ the sausage until the raw color disappears. Remove and reserve. In the same skillet, cook the onion and spinach until wilted. Add the oregano and stock and bring to a boil. Stir in the feta, olives, tomato, and reserved sausage and heat through. Toss
with pasta and sprinkle with parsley.

In a skillet, heat the oil. SautČ the onion and garlic for about 5 minutes. Add the spinach and tomato and cook for another 4 minutes. Stir in the oregano and season with salt and pepper. Remove the mixture to a shallow 2-quart baking dish.
Preheat the oven to 425'F. Combine all of the topping ingredients except the oil. Sprinkle the topping over the spinach mixture and drizzle the oil over the topping. Bake for
about 15 minutes, or until the topping is golden-brown and
crisp.