Cherry tomatoes are popular at cocktail parties for the same reason that pitted olives and roasted almonds are: there are no telltale pits left behind to count up and feel guilty about. Some people also eat them because they like the taste, which sometimes, though not always, resembles that of a tomato.

Tomatoes are possibly the major casualty of modern produce-handling techniques, which include picking tomatoes prematurely and gassing them to desired redness (but not ripeness) in transit. The result is a general and justifiable suspicion by Americans of all tomatoes, especially the most beautiful.

Another recent tomato trend is more positive. Tomato growers, from professional producers to home gardeners, are seeking out tasty old varieties in all shapes, colors, and sizes. At produce stands, farmers' markets, and even corner grocery stores, more of them are showing up every day. This means choice: tiny persimmon-colored "currant" tomatoes, yellow and red pear-shaped miniatures; flavorful multicolored jewels called Pixies, Tiny Tims, and Golden Pygmies. Equally succulent are the larger specimens: the surprisingly cream-colored White Beauties, the yellow and red Striped Caravans, the large Oxhearts, the yellow Lemon Boys, and the two meaty, pink, enigmatically named oddities, Stump of the World and Mortgage Lifter. The most important question in getting to know tomatoes, however, is not: What is your name? It is, rather: Were you ripened on the vine? 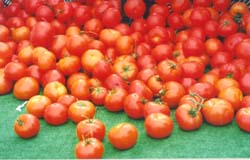 Even major supermarket chains are beginning to realize that their customers have little taste for ethylene. This is especially true for tomatoes because they are so often eaten raw. In salads, salsas, and cold soups, tomatoes act as both central ingredient and main condiment. In cooked dishes, tomatoes enhance the ingredients they accompany. Tomatoes are popular from the Sahara Desert, where they are baked into bread, to the Catalan region of Spain, where they are rubbed into sliced bread to become the ubiquitously popular pa amb tomaquet, to San Francisco, where the famous fish dish cioppino gets its distinction from the tomato.

The Latin binomial for tomato, Lycopersicon esculentum, has a strange translation: "edible wolf's peach." Perhaps this ominous designation reflects the awe that greeted the vegetable when it was first brought to Europe from the New World. Native Americans, however, made much use of it, even devising techniques for sun-drying tomatoes on slanted boards. This they taught to Cortez, who reportedly passed it on to his countrymen. Ironically, when the newly discovered vegetable was reintroduced back to the Americas, it met with varying degrees of success. In Salem, Massachusetts, for example, a determined Italian painter brought tomatoes to town in the early 1800s, only to have them summarily rejected. Yet, a quarter of a century later, tomatoes were extolled by a visitor as the "great luxury of the American table."

Serious tomato discussions eventually get around to the recurring debate about whether tomatoes are a fruit or a vegetable. By some definitions, the tomato is not onlv a fruit (because it consists of an ovary and its seeds), it is also a berry because it contains more than one seed. This sort of debate might have remained forever insoluble had it not become a matter of economics. When an importer argued that no duty had to be paid on his tomatoes because, at the time, they fell under the duty-free category of fruit, the controversy reached the attention of the Supreme Court. In its ruling, presumably issued after some judicious meal planning, the judges contended that tomatoes are indeed a vegetable because they are "usually served at dinner, in, with, or after the soup, fish, or meat, which constitute the principal part of the repast, and not, like fruits, generally as dessert." And that's the law.

Nutritional Value
Potassium, good source of vitamins A and C; 40 calories per cup

Cooking and Handling Notes
To peel tomatoes, submerge them in boiling water for about 30 seconds. Plunge them into cold water and slip the skins off. To seed, cut them in half crosswise and gently squeeze out seeds.

Red and Yellow Cherry Tomato Bruschetta
serves 6 as an appetizer

Brush both sides of the bread with the olive oil. Grill or broil the bread on both sides until it just begins to color. Rub one side with the cut clove of garlic. Combine the remaining ingredients and spread on the bread. Serve as soon as possible.

Rigatoni with Prawns, Tomatoes, and Fennel
serves 4 to 6 as a first course

In a skillet heat the oil. Cook the fennel seed and garlic for about 1 minute, or until fragrant. Add the prawns and cook, stirring, just until they turn pink. Remove and reserve. To the same skillet, add the fennel. Cook until it is slightly soft, about 4 minutes. Add the tomato and tomato paste and cook until thickened, about 10 minutes. Return the prawns to the sauce and cook at a bare simmer for about 3 minutes. Salt and pepper to taste. Toss with rigatoni and serve.

Combine the vegetables in a large bowl. Mix the dressing ingredients until thoroughly combined. Toss with the vegetables; marinate, covered, in the refrigerator for about 2 hours before serving.

In the bowl of a food processor, combine the tomatoes, onion, salt, pepper, honey, and lemon juice. Process until pureed; add the cream and yogurt. Process just until blended. Stir in the cucumber and chives. Chill about 2 hours and serve.

Tomato and Two-Bean Soup
serves 6 to 8

In a large saucepan, heat the butter and oil. SautČ the onion until very soft, about 10 n-dnutes. Add the tomato and cook for about 20 minutes. Puree the mixture in a food processor; then pass through a food mill to remove seeds and skin. Bring to a boil with the stock. Add the beans and sage and simmer for 10 minutes. Season with salt and pepper. Serve hot, garnished with a sprinkling of cheese.