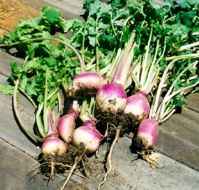 Many people think of turnips as woody, leaden spheres, the color of baseballs and with about as much culinary appeal. Yet now, with more and more varieties available, it is possible to eat tender young turnips very lightly cooked or even raw. Another amazement in the turnip universe is the array of available colors: red-skinned, purple-tipped, pearl-white, golden-yellow. A salad of all these, thinly sliced in rounds, can be as bright and festive as a basket of confetti.

No one would suspect that turnips are the same vegetable once ranked, by whole nations, too low for edible consideration. Even hungry New Englanders disdained them as plebeian, though they ate them to prevent scurvy, preferably with mutton. Early New Yorkers ate them in a Dutch combo: boiled and mashed with potatoes and smeared with butter. The Pennsylvania Dutch often made coleslaw with turnips instead of cabbage, a concept similar to turnip kraut, a variation on cabbage sauerkraut. The Scottish actually ate turnips willingly with their haggis (which they also ate willingly), but they referred to them by the rather pugnacious name "bashed neeps." (Turnips were originally called "neeps," from the Latin word for turnip, napus, which also gave rise to the French word navet. The prefix turn refers to their spherical shape.)

Perhaps the apotheosis of tumipdom is the French stew Navarin a la Printaniere, made with young turnips and spring lamb. Escoffier may have paid turnips their highest compliment by turning them into his lyrical stuffed turnips (navets farcis); but perhaps even more surprising, Goethe himself had a favorite turnip recipe: "Turnips are good," he proclaimed in his Prose Maxims, "but they are best mixed with chestnuts."

A member of the cabbage family, turnips are similar in appearance to such root vegetables as rutabagas and swedes (originally Swedish turnips). In general, turnips are smoother than these cousins and have several circles of ridges at the base of their leaves. For cooking purposes, they can an be used interchangeably.

Turnips have been around a long time: they were enjoyed by Greek epicures (who favored those from Thebes) and by Roman gourmets (their turnips had to be from Amitermes). In one Roman dish, turnips were presented in sixteen different colors, though the favorite, by far, was purple. In the Orient, tender strips of turnip make a quick and delicious stir-fry. But no discussion of turnips is complete without due homage to the man they called "Turnip" Townshend, who, in the early 1700s, introduced a bevy of unknown Dutch turnip varieties to England. Although his efforts had beneficial effects on the way people thought about turnips, they also (unfortunately for "Turnip") changed the way people referred to the man who brought them. He had been known previously as "Lord" Townshend.

Market Selection
The variety generally available is the white globe-shaped turnip. Red, purple, and pink turnips can be found in some markets, and very young, walnut-sized turnips are being harvested in early spring for the consumer. If you want sweet, tender turnips, select smaller roots. Turnips should be no larger than 3 inches in diameter, with unblemished skins and fresh-looking greens (if they are attached).

Availability
While turnips are available year-round, young turnips are prevalent only in spring.

Storage
Because of their high water content, turnips deteriorate quickly. Store, unwashed, in a plastic bag in the refrigerator up to 1 week.

Nutritional Value
Turnips contain potassium and iron and are a good source of vitamin C.
36 calories per cup

In a large pot of salted boiling water, cook the turnip, potato, and garlic for 10 minutes, or until the vegetables are tender. Drain and puree the vegetables and garlic through a food mill. (A food processor is not recommended, as it can turn potatoes very starchy.) Beat in the butter and sour cream and season with salt and pepper.

In a saute pan, heat the oil with the garlic. Add the turnip and raisins and cook for about 1 minute. Add the lemon juice; cover and cook for 3 more minutes. Stir in the spinach and cook just until wilted. Sprinkle with nutmeg and salt and pepper to taste.

In a large saucepan, heat the butter. Add the onion, celery, turnip, and apple. Cook until wilted. Stir in the curry powder and parsley; cook for another minute. Add the stock, bring to a boil, and add the rice. Lower the heat and simmer, covered, for 20 minutes.

Puree the mixture in a blender or food processor. Season with salt and pepper and sprinkle with chopped chives.

Remove any excess fat from the duck. Sprinkle with salt and pepper. With the tines of a fork, pierce the skin in several places. Heat a skillet and place the duck in it, skin-side down. Cook until the fat begins to render. Turn and cook on the other side for about 8 minutes, or until browned. Remove and reserve.

In the same skillet, cook the shallot until soft. Add the turnips and cook on all sides for a total of 3 minutes. Add the vinegar; bring to a boil and add the stock. Boil for about 2 minutes. Return the duck to the skillet; cover and cook for 10 minutes over medium heat. Uncover and cook for another 5 minutes.

Slice each duck breast thinly. Arrange in a petal-like formation on four plates. Spoon the sauce over the duck, surround with turnips, and sprinkle with raspberries.