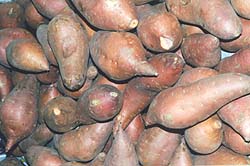 It is possible to make an enormous fuss over the difference between sweet potatoes and yams. Botanically speaking, the two vegetables share nothing except for some flowery associations. The yam, a tuber, is a member of the lily family, while the sweet potato is a member of the morning glory family. Yams are usually sweeter, moister, plumper, denser, and a deeper orange color than sweet potatoes -- though not always. The two plants also come from different parts of the world. The yam probably originated in Africa (although it may be the same plant that had been cultivated in Asia since 8000 B.C.); the sweet potato is a New World plant discovered by Columbus (although it may have mysteriously traveled to Polynesia hundreds of years prior to Columbus's first voyage). Slaves in the American South called the sweet potato nyamis because of its similarity to a vegetable of that name that they knew from their homeland. This African word brought the two vegetables together, probably for all eternity, despite botany, archaeology, plant pathology, and the like. And that's probably just as well.

For all practical purposes, it might be more intriguing to think of the yam and the sweet potato as twins separated at birth, growing up with different quirks and twitches but retaining the essential sweet nature that makes them virtually interchangeable from a culinary perspective. Furthermore, the yams generally available in this country are really a variety of sweet potato. (True yams do offer one element missing from sweet potatoes; they contain a compound from which the sex hormone estrogen was first manufactured.)

The value of the sweet potato as a main-course vegetable as well as a dessert has been proven in most cultures and at every American Thanksgiving. The European acceptance of the sweet potato following Columbus's return to Spain was immediate and enthusiastic. The Spanish potato, as it became known, was also soon elevated to the status of aphrodisiac, assuring it an entree to the highest levels of society. Henry VIII had sweet potatoes imported from Spain and made into many types of confections. The distinguished culinary writer and chef Antonin Careme assured the vegetable immortality when he included it in his classic The Art Of French Cooking in the Nineteenth Century. Perhaps less well known is the vegetable's popularity both in China, where it is sun-dried and used for noodle making, and in Japan, where it has been a staple for hundreds of years, especially when typhoons have decimated the rice crop.

But it is the American Thanksgiving that is the true test of the sweet potato's versatility. It is transformed into pies, puddings, and muffins, as well as candied vegetables, biscuits, and even ice cream. The wonder is that, like so many of the foods associated with Thanksgiving, from cranberries and chestnuts to the turkey itself, sweet potatoes are packed away, psychologically speaking, until the next Thanksgiving comes along. Not only can sweet potatoes be substituted in almost any recipe for white potatoes with unexpected and sprightly results, but they make tasty and unusual combinations when sauteed with garlic and tomatoes, layered in gratins with various types of cheese, or fried in tempura batter and served with dipping sauces.

In Louisiana Creole country, any day might begin with sweet potatoes in the form of waffles, fritters, or pone. But when there is world enough and time, people look forward to one of the oldest Creole specialties, patates douces. As originally prepared, sweet potatoes are buried in ashes at the end of a meal and left to cook slowly until the next. The almost century-old Picayune Creole Cook Book issued this word of warning in 1901: "[preparing] the sweet potato is an art, for the delicate flavor of the potato is lost if it is not properly cooked."

Homage to the sweet potato/yam is an institution in parts of Louisiana, where an annual October festival, the Yambilee, culminates in a colorful procession called the Grand Louisiana Parade.

Storage
May be stored, unwrapped, at room temperature, for about 10 days or in a cool, dark place for up to 2 months.

Basic Cooking Methods
Cook in boiling salted waterr for 20 minutes. Steam for 25 minutes.
To bake: Pierce the skin in several places with a fork. Bake in a preheated 450 degrees F oven for 45 minutes.

In a large saucepan, heat the oil. Cook the leek, celery, and jalapefio until soft, about 8 minutes. Stir in the parsley, cumin, and mushrooms and cook for 2 more minutes. Add the tomato paste and sweet potato and stir well to combine. Pour in the stock and bring to a boil. Reduce the heat, partially cover, and simmer for 15 minutes.

Add the corn and cook for another 5 minutes. Remove about 1 cup of the vegetables to a food processor and puree with about 1/2 cup liquid from the soup. Return to the pot, season with salt and pepper, and sprinkle with cilantro.

In a food processor, combine the potato with the remaining ingredients, except the butter, yogurt, and cumin, until smooth. In a large skillet, heat the oil. Spoon the batter into the pan to form 2-inch pancakes. Fry for about 45 seconds per side, or until golden-brown. Serve immediately. Combine the yogurt with the cumin and serve over the pancakes.

In a large skillet, cook the bacon until crisp . Drain it on paper towels and crumble. Pour out all but 5 tablespoons of bacon fat from the skillet. Cook the sweet potato, covered, for about 10 minutes. Uncover, add the garlic, and cook for another 8 minutes. Add the greens and cook just until wilted. Season with salt and pepper and sprinkle with crumbled bacon.