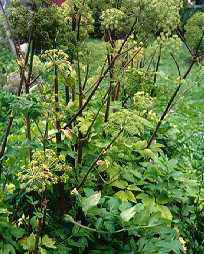 Generally, Autumn is not exactly the the season that inspires one to think about rummaging around in the garden planting seeds, but this is actually a good time to get a head start on certain plants, as long as you are in a mild winter climate.

Seeds planted now, either in seed trays inside or directly into the garden will come up earlier and stronger than spring seedings. One plant that benefits from this sort of head start is Angelica. While not familiar to many people, Angelica archangelica is a dramatic addition to any herb garden. Not only are all parts of the plant sweetly aromatic but Angelica grows to a height of 6 to 8 feet! An important factor to consider when thinking about where to plant this herb.

Angelica makes an attractive backdrop for other herbs, not only because of its height. Angelica's bright green leaves, made up of three finely toothed leaflets, and its stems also are a pleasing contrast in the garden. Angelica's long sturdy hollow stems are ribbed. Delicately colored, they start out purple at the base and lighten to a pale yellow green. Angelica is a biennial, and usually only blooms every two or three years. When the blossoms do appear, in mid to late summer, they tower above everything in the garden: globes of tiny yellow or white flowers. As they mature, the flowers produce small oval seeds. It is best to plant the seeds right away, but they can also be refrigerated in an airtight jar for planting later, either directly in the ground, or starting them in seed trays. Angelica prefers a warm, not hot, climate. It also does well in a area with filtered shade and rich soil. Start seeds in clumps but thin early to avoid overcrowding of these giant members of the parsley family.

All parts of the plant can be used, it is merely a matter of when each part is at its peak.The roots are best in the fall of the first year; the stems and leaves are at their peak in the spring of the second year; and the seeds are ready for use when mature.Angelica's flavor is delicate and sweet; reminiscent of celery. In fact, it is often called wild celery. Its origin is northern Europe and Asia. Many people in the cold Northern regions such as Siberia and Finland consider Angelica a vegetable, and eat the stems raw, sometimes spread with butter, although I find them rather strong and astringent in this form. For a milder taste, try chopping the stems and roasting them with onions. This makes a wonderfully caramelized side dish for pork.

Because of its celery like flavor, Angelica has a natural affinity with fish. Often the leaves are minced and used as a part of a court boullion to season poaching liquid. The leaves have a stronger, clean taste and make a interesting addition to salads. Laplanders wrap fish in the leaves to act as a preservative on long journeys because of its antimicrobial properties, in addition to imparting its delicate taste. The chopped stems are frequently added to stewed fruits (rhubarb and plums in particular). It doesn't add much of its own flavor, but reduces tartness and lessens the need for sugar. Use the leaves in a similar manner when cooking squash or pumpkin to bring out their natural sweetness. The roots and seeds are used to flavor herb liqueurs such as Benedictine, gin, absinthe, and Chartreuse. When ground into a powder the root has a stronger earthy flavor, and is used in cookies, cakes, breads and muffins.

But perhaps the most familiar use of Angelica is in its candied form. The stems are sugared and colored and used extensively in decorating cakes and desserts. It is Angelica that was the original green candy in fruit cakes. Angelica is making its way into the mainstream. Just today one of our beverage distributors brought us a sample of a "health drink." I was pleasantly surprised to read that Angelica was one of the ingredients. All parts of the plant have medicinal properties, and has long been used in the treatment of respiratory ailments, as well as an aid to digestion. In fact most all varieties of Angelica (and there are over 50) possess medicinal qualities.

Many people here in the US are becoming familiar with Don Quai, Angelica sinensis. Grown in Asia, it is a very powerful plant used for building blood and regulating the body. It is generally known as a woman's tonic. Commercially, Angelica oil is often used in potpourri. It is also used to produce a relaxing, pleasant smelling bath oil. There are many different stories explaining how Angelica got such a holy name. One such story tells of a monk back in 1665 who met an angel in his dreams. The angel told him of a plant that could cure the plague. The monk took the advice and boiled angelica, treacle and nutmeg together into a tea. However, none of my sources mention how successful this treatment was. Another theory on the origin of the name speculates that the plant derives it name from the fact that Angelica comes into bloom around May 8, the feast day of St. Michael the Archangel.

So whether you wish to grow Angelica for its crunchy stems, its sweet leaves, or just to have such a celestial plant looming in your garden, fall is the time to start the seeds.

Angelica Butter
yield 16 "coins"
A light and simple recipe that brings out the best in fresh fish.

Soften the butter in a small mixing bowl. Mix in the remaining ingredients, making sure to avoid any pith in the lemon rind. Place the mixture on a sheet of plastic wrap and set in the refrigerator until stiff enough to form a log. Shape the butter about 1 1/2" thick and cover with the plastic. Freeze the log until you are ready to use it. Slice into coin size pieces so they will melt easily. Place directly out of the freezer onto hot grilled, sauteed, or poach fish.