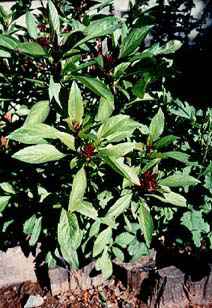 As I stroll through my garden, soaking up the fading warmth of a late fall day, most of the plants from summer have withered, done for the year. There is one shrub, however, that is still vibrant, bushy and waiting to be used: Basil. Robust, spicy, pleasing to the eye; little wonder it is so praised in the kitchen, as well as in history.

Basil has long been revered. It has even been the stuff of legends. In ancient Rome, the name for the herb, Basilescus, referred to Basilisk, the fire breathing dragon. Taking the herb was thought to be the charm against the beast. With this in mind, it is interesting to note that today basil is used as an antidote to venom.

The Greeks also had great respect for Basil; their word for it meaning royal or kingly. It was believed that only the king himself should harvest this herb, and only with the use of a golden sickle. In Romania basil took a more romantic turn. There, when a lad accepts a sprig of basil from a maiden, he is officially engaged.

There are more than twelve varieties of basil that are cultivated for culinary use. Sweet Basil, Ocimum bacilicum, and its close relative Genoa Basil, Genova Profumatissima, are the most familiar varieties. Both produce fragrant, broad, deep green leaves in abundance. Their spiciness is the perfect compliment to ripe red tomatoes and soft cheeses such as fresh mozzarella and brie.

Other varieties of basil range in color from richly ruffled purple to pale mossy green. Each one has a distinctive taste, with its name revealing the underlying tones: Lemon Basil, Cinnamon Basil, Persian Anise Basil. Even their tiny flowers, which appear in swirls on slender spikes that extend high above the plants, are edible. Depending on the type, the flowers are either bright white, pale pink, or a delicate lavender. The flavor of the flower is milder, but similar to the leaves of the same plant. Sprinkle them over salad or pasta for a concentrated flavor and a spark of color that gives any dish a fresh, festive look.

Say the word basil and most people think of the glistening emerald green sauce known as pesto. First produced in Genoa, it is only natural that the sauce originated there. The Mediterranean climate that makes basil thrive is also perfect for growing olives, and producing oil from them.

The name "pesto" comes from the Italian word pestare meaning to pound or bruise. Originally the fresh picked leaves were placed in a mortar along with garlic, salt and pine nuts, and ground into a paste with a pestle. Then dry, sharp cheese was pounded in. Extra virgin olive oil was drizzled in, and it was all whisked together. Today the food processor can make fast work of it, and is especially useful when making a large batch. But there is something so earthy about grinding it in the mortar, releasing the spicy green aroma of the basil and the pungent tang of the garlic. The creamy texture is well worth the extra effort.

Although we tend to associate basil with Italy and other Mediterranean countries, it actually originated in India, and was brought to the Mediterranean via the spice routes in ancient times. Tulsi, as the herb is known in Hindi, means Sacred Basil, and is often grown as a house plant.

From India basil traveled not only to Europe, but spread to other parts of Asia as well, most notably to Thailand. The tanginess of clove and licorice in Thai Basil are the perfect compliment to the silky richness of Thai curries.

For the cook who wants to bring these exotic flavors home, basil is one of the easiest of the herbs to grow. Given long hours of hot sunlight and plenty of water, it will produce a crop of fragrant leaves all summer. Be sure to pinch back the top and cut off any flower spikes. This will encourage more growth and keep the plant producing up until the first frost. This longevity makes basil an ideal plant for a garden border. Try planting a number of different varieties to add color to the garden. Thai and Cinnamon Basil, their leaves slender and pale with sharp grooves and contrasting deep purple flower spikes, are dramatic when interspersed with the rich hues of the Purple Ruffle Basil and Sweet Basil (with its broad, vibrantly green foliage). If space is a problem, most forms of basil do well in containers, and even indoors, as long as they have sufficient light and heat.

Basil plants are abundant producers, often making it necessary to preserve some for later use. One method is to puree the leaves with a bit of water or oil; portion this into ice cube trays and freeze. When they are solidly frozen, remove and store in the freezer in a zip lock bag. This is a convenient way to add just the right amount of basil to sauces or soups. It is best to add the cubes, or any form of basil, at the end of the cooking process so their flavor does not fade.

Another, more traditional, means of preserving basil is to layer the leaves in a jar, lightly salt them, and then cover with a layer of virgin olive oil. When handling the herb, do so with care, as it bruises easily and will turn black. Seal the lid tightly and place in a cool, dark spot or refrigerate. Use the leaves as needed and reseal each time. This will keep up to six months. The oil soon becomes infused with the essence of the basil, making it ideal for use in dressings or in pastas.

Try this using decorative glass containers. They create an attractive and tempting present for the holidays; capturing the essence of the season to savor until the next harvest.

Place the first five ingredients in a food processor and puree. SautČ the fennel root in the tablespoon of olive oil until slightly golden. Cool and add to the processor. Puree again.

Transfer puree to a bowl and stir in the red bell pepper. Add salt and pepper to taste.

This is savory treat when spread on focaccia or bruschetta, either by itself or with the addition of creamy goat cheese. Or try it as a quick and satisfying starter when tossed with hot pasta.