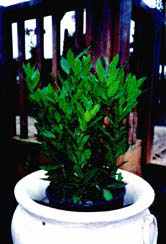 Bringing together other flavors, giving them depth, and adding richness is what Bay leaves do best. Rarely will you find them as the main flavor in a dish. Add them to all manner of fish dishes, meats, vegetables, soups, stews, marinades, and sauces, even custards. Cuisines all over the world utilize Bay leaves. Use them sparingly as they are very potent.

One of the better known uses for Bay leaves is a one of the elements of the classic herb combination Bouquet Garni, along with parsley and thyme. Traditionally, these fresh herbs are tied together, added to a dish, allowed to simmer, and then lifted out at the end of cooking. Dried herbs can be substituted and tied in a bit of cheesecloth. Add other herbs as the nature of the dish and your whims dictate. Try adding lemon, sage and tarragon with chicken; rosemary and mint with lamb; green peppercorns, orange and savory to beef.

The very intense flavor of fresh Bay leaves tend to mellow when dried for a few days. Crinkle the leaves just before using them to release the flavor. Old, dried leaves tend to loose their flavor so be sure to replenish your supply often. Bay trees are plentiful in my area, and I love to go out periodically to pick bundles of bay leaves to keep around the kitchen, both for decoration and for cooking. My favorite time to do this is just after it rains: the fragrance of the trees seems to be so much more potent. The attractive spear shaped leaves and earthy aroma also make Bay branches a pleasing addition to floral arrangements. They make a festive holiday bouquet with rust colored chrysanthemums and pyracantha berries for example.

Bay leaves, also known as Sweet Bay or Sweet Laurel, are one of the most commonly used herbs. Its history dates back to the legends of the Greek god Apollo, god of prophecy, healing and poetry. Apollo was madly in love with a nymph named Daphne, so the story goes. She wanted no part of his affections and turned herself into a bay tree (which were plentiful on the Greek isles) to hide from him. When he found out he declared the bay tree sacred and wore a wreath of its leaves on his head in her memory. In this same manner, crowns of bay leaves were given to victors in battle and sporting events in ancient Greece and Rome. Poets received the similar honor -- poets laureate -- an honor we still bestow today.

Bay leaves also played an important part in the Temple at Delphi, dedicated to Apollo. Before delivering their prophecies, the priestesses would eat whole bay leaves. Since they are mildly narcotic, this might have helped induce the trance states. Even the roof of the temple was thatched with boughs of bay leaves. This not only served as a sunscreen but was believed to protect against lightening, disease, and evil spirits. Historically Bay leaves were used in infusions to aid in digestive disorders, and were applied to injured areas to ease sprains.

Even the scientific name of the tree, Laurus nobilus, gives it a regal air. The bay sets itself apart as well in the fact that we use its leaves as an herb since most herbs are the leaves from annual or perennial plants, rather than from a tree.

Although it is a indigenous to Asia, the Bay tree has so well adapted to the climate of the Mediterranean, and played such a major role in its culture, that it is often thought of as a native to that area. It thrives when given partial shade to full sun, rich well drained soil, and is protected from drafts. It can grow up to 23' in height. With its handsome shiny leaves, the bay tree makes an attractive addition to the garden, and even does well as a container plant. Its blossoms are cream colored and waxy, and the bees love them. Make sure that when you are harvesting leaves for cooking that it is indeed the leaves of the Laurus nobilis, and not the cherry laurel, a decorative but poisonous tree. The surest test is to crinkle the leaves and savor the pungent, spicy fragrance that is the Bay leaf's signature.

Put the half & half in a pot along with the orange peel, bay leaf and cranberries. Bring just to a boil and remove from heat. Let stand for 15 minutes. Meanwhile, combine the cinnamon, eggs and sugar in a bowl. After the 15 minutes, strain the half & half mixture into the egg mixture, pressing the cranberries to extract some color and flavor. Discard the cranberries and other solids. Pour the mixture back into the pot and cook over medium heat, stirring all the while, just until it has thickened enough to coat the back of a spoon. Pour this into a single large ramekin or 4 smaller ones. Place these in a baking dish and fill with water half way up the sides of the ramekins. Bake at 300 degrees for about 30 minutes or until a knife inserted into the custard comes out clean. Cool before serving.