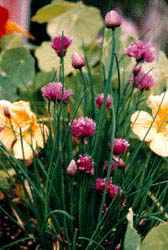 "Eat no onions nor garlic, for we are to utter sweet breath." Ah, even Shakespeare was want to ban onions and their relatives for their less than pleasant second hand effects. And yet I can't imagine life in the kitchen without these incredible bulbs and their cousins, leeks and chives. Garlic adds fullness of flavor. Leeks impart a mild, green, oniony taste. When caramelized, onions give a hint of sweetness and depth to our stews, sauces, and soups. And then there are chives, the most delicate and versatile of them all. They give a light, fresh hint of onion to whatever they garnish, and are an integral component of seasoning mixes, as well as being an important element in any garden.

Chives (Allium schoenoprasum) and garlic belong to the genus Allium, considered the "ornamental" relative of the onion. Part of the Liliacae family, they are the same family of bulb plants that produces beautiful, exotic lilies.

There are over 500 types of Allium, some edible, some strictly ornamental, with many being both edible and showy. One of my favorites is a wild, edible variety called Allium triquetrum (three cornered leek). Each spring I wait with anticipation for their invasion. Suddenly, as if overnight, literally thousands of these plants with their dainty bell shaped pendant flowers appear. They fill dense shady areas and stream beds with a burst of white and fragrance. I use the tiny flowers with green striping tossed in salads, or as a garnish for soups; they are especially attractive on vichyssoise or a creamy tomato soup. With their graceful appearance and mild onion flavor they are an edible reminder that spring has arrived.

Most of the Allium have a similar look: erect, leafless stems that end in a pompon of tightly clustered tiny flowers. The sizes of the varieties covers a broad spectrum. The giant Allium grows to over five feet tall, producing a spectacular bright lilac flower globe the size of a softball, whereas the chive is a miniature version which rarely grows to over one foot tall. Another feature which sets chives apart is that its leaves, rather than being flat, are hollow tapered tubes ending in a sharp point. The blossom is actually a tight cluster of six- pointed pink flowers, reminiscent of clover blossoms, giving it the appearance of a single bloom.

The common link among all of the Allium is the sulfur compounds that gives them their "oniony" taste and questionable reputation since the earliest of times. Muslim legend has it that when Satan left the garden of Eden garlic sprang up from his left footstep and onion from his right! Not the best of associations, and yet for the Rumanian Gypsies, chives were used as part of their fortune telling rituals. Chives were also believed to drive away evil influences and disease when hung in dried bunches around the house.

Evil spirits aside, science has proved that the sulfur compounds are actually beneficial for blood circulation, and for the respiratory and digestive systems. Garlic has the highest concentrations of sulfur, and thus is the most potent. Chives also have high levels of vitamin C and A, but unlike the far more concentrated garlic, they contain only small amounts of the sulfur and so rarely are they mentioned as having medicinal properties. Their value is truly in the kitchen and the garden.

Give chives full sun and rich, well drained soil and they will reward you with cheery blooms and tasty stems all summer. In mild climates they are considered perennials. They are also one of the better herbs to grow inside on a sunny windowsill to keep the harvest coming all year. The plants are tight clumps of individual, very tiny bulbs which can be easily separated and transplanted. The bright blossoms and the slender deep green stalks make chives a decorative choice for borders, rock gardens, herb gardens or anywhere a splash of color is wanted.

This year I've planted chives in a number of locations around the yard, each with a slightly different purpose. They are the centerpiece of an "herb bowl," along with cilantro and nasturtiums for a colorful and zesty display. I've interspersed them with my rose bushes because chives supposedly protect the roses from black spot and Japanese beetles. In a small English-style garden I've used chives not only for a spark of color from the blooms, but for the shape of the leaves -- the grasslike spears are a wonderful contrast to the rest of the more common foliage.

Once the chives are producing blossoms it is important to keep cutting them back to encourage growth, doing small sections at a time rather than just trimming the whole top. Use a scissors to snip the greens; this prevents bruising and avoids pulling the out whole root. Snip the greens for use in the kitchen as well. They are best when used fresh, but they can also be frozen, or dried for herb blends. For use in floral arrangements, the blossoms can be dried by laying them on fine wire mesh in a dimly light, well ventilated area.

Chives have long been used in the kitchen, with recipes from China dating back nearly 5000 years. The French are also quite familiar with chives, using them as a garnish and seasoning.

Because their flavor is so mild and the color so vivid, chives are an ideal addition to spreads, herb butters, and dips; tossed in salads; and even used as a flavoring for vinegars. Using the blossoms in the vinegar dyes it a soft pink tone, and makes an attractive gift when bottled in decorative glass.

One of the most popular uses of chives today is as one of the components in the traditional herb mixture fines herbes. Combined in equal portions with tarragon, chervil, and parsley this blend adds an aromatic note to chicken and fish dishes and is especially tasty with eggs. An omelet made with fines herbes, asparagus, goat cheese, and garnished with chive blossoms makes a festive spring entree.

For a twist on traditional tempura, add chive stems, with blossom attached, to your list of ingredients. Spicy, crunchy and sweet, all in the same bite.

One of my favorite ways to use chives is as a tie for vegetable bundles. Simply snip a long strand with a blossom on top; dip all but the blossom into boiling water for 5-10 seconds so it will go limp; rinse in cold water and then tie around a small bundle of vegetables. Matchstick cut carrots or asparagus work best. A great way to bring the garden to the table!

Combine all but the optional ingredients in a food processor or by hand. Let sit a least one hour before using to blend flavors.

Use as a spread for bruschetta, topped with sundried tomatoes or strips of julienned roasted red bell peppers. This mixture is also a very tasty addition to omelettes, or pastas, or as the cheese base for pizzas.

For a decorative twist to any cheese platter, sprinkle the optional ingredients evenly over a small area of your cutting board: approximately four by four-inches In the palm of your hand, roll the cheese mixture until it is a rounded shape. Roll the cheese in the chives until evenly coated. Display on grape leaves or day lily petals for a dazzling effect!