The world is divided into two very different types of people: those who love cilantro and those who hate it. I know those are strong words, but I have found that on this subject, much more so than politics, people are either on one side of the fence or another, no wishy washy sentiments here. Many of the herb books I consulted were less than flattering when talking about cilantro and its seed, coriander. Calling the leaves (cilantro) soapy tasting, they went on to say that the immature seeds had a most unpleasant odor, "like bed bugs," one text even comparing it to "burned rubber!"

Personally, I fall into the cilantro-loving category along with all those who tout its citrusy, biting tang, and can't imagine a spicy, Mexican salsa without its perky addition. Although not native to Latin American cuisine, cilantro now plays a quintessential role, adding its distinctive flavor to many dishes such as ceviche, the light and refreshing acid cooked fish dish, and many sauces and stews. One delicious example is pumpkin seed sauce. Simple, but rich and zesty, it was traditionally served over fish or wild game but is now most often served over chicken. Most dishes, even if they don't list cilantro as one of the ingredients will call for it as a garnish to add that final touch of piquancy. 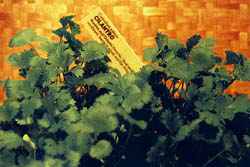 Chinese, Thai, and Indonesian cuisines are well known for their use of both cilantro and coriander. Chopped, the leaves, as well as the more pungent roots, add zest to most Thai curries, and the ground seeds (called coriander) also gives depth to the flavors. India curry powders owe a lot of their aromatic, citrus quality to ground coriander. The Chinese, quite accurately, call cilantro "fragrant greens," adding it to stir fries and sauces to enliven them and add a fresh, pungent taste. The whole plant, roots and all, is often boiled and eaten as a vegetable.

Cilantro and coriander are fairly recent arrivals to the American kitchen. Coriander is the more familiar, used in gingerbread, cookies, yeast breads, sausages, stews, and chicken dishes. Try adding a dash of coriander to cooked beets for a zesty treat. When cooking with cilantro, add it at the very end, as overcooking will muddy the taste.

Although cilantro and coriander are most often associated with the cuisines of Mexico and Asia, the herb originated in the southern reaches of the Mediterranean. Coriander has been found in Egyptian tombs dating back 3000 years. It is even mentioned in the Bible in Exodus 16:31, where manna is described as "small round and white like coriander seed." The ancient Hebrews originally used cilantro root as the bitter herb in the symbolic Passover meal.

Thanks to the Romans and their conquests, cilantro's use and legend spread to Europe and Asia, where it appeared in recipes for potions used as aphrodisiacs in China during the Han dynasty (207 BC-200 AD). The Romans themselves used coriander with cumin and vinegar as a preservative which they rubbed into meat.

In literature, coriander is mentioned as an aphrodisiac in The Tales of the Arabian Nights. And those famous sugarplums which fill children's dreams at Christmas time were originally sugar coated coriander, a treat that offered a sweet start and then a spicy burst of flavor. Later the recipe included small bits of fruit and became the confection we know today.

Cilantro (Coriandrum sativum) is a relatively easy to grow annual, requiring partial shade to full sun, moderately rich soil, and good drainage. Because it attracts bees, it is a welcome addition to any garden. It grows quickly and reseeds itself easily, producing delicate white to lavender flowers in an umbrella-like display. Keep the plant pinched back to restrain it from going to seed too quickly. The tender, young leaves are the tastiest. I find it helpful to plant new starts every few week to keep an ongoing supply available all summer.

To harvest the seeds, wait until they have turned from green to brown, then dry them and store in airtight jars. To release the best flavor, crush the seeds in a mortar just as you are ready to use them. A member of the Umbelliferae family, which includes carrots and parsley, cilantro is one of the more fragile herbs, with its delicate, lacy foliage reminiscent of flat leaf parsley. The leaves do not dry well and should be used fresh. To store cilantro purchased at a store, cut off the stem ends and place the bunch in a glass of water and keep it refrigerated until you use them. Rinse the leaves just before use.

Medically, coriander is not one of the more potent herbs. Mostly used to settle the stomach, its warm, fragrant taste does make it preferable to some of the more pungent, powerful herbs like savory. In fact, coriander is often used commercially as an ingredient to make medications more palatable. It is also used as a flavoring in gin, pickles and sausages, as well as a component of makeup and perfumes.

Despite all the bad press, cilantro and coriander are still an integral part of many cuisines throughout the world, and gaining popularity all the time. So, if you or a friend are still not cilantro lovers, give it another try. A whole world of taste awaits!

Cilantro Herb Butter
serves 4
This is a quick and delicious way to add spice to grilled fish and chicken. It is especially tasty using red snapper.

Soften the butter. Add the rest of the ingredients and mix until well combined. Place on plastic wrap and roll it, forming a log about 1 1/2" thick and 4" long. Put it in the freezer to harden, and keep it frozen until ready to use.

To use: cut thin "coins," about 1/4-inch thick, from the roll and place them on fish or chicken during the final few minutes in the broiler or on the barbecue, just long enough for the butter to melt. Two "coins" per 4-6 ounce piece of meat should be plenty. Garish with sprigs of cilantro. For a more elegant presentation, spread the soft butter into a 1/4-inch thick sheet rather than the roll, then freeze. Cut decorative shapes from the frozen butter and place on fully cooked meat, once it is on the final serving plate.