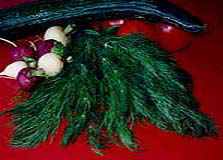 There are so many articles out these days touting the virtues of some of the more unusual herbs -- angelica, hyssop, lemon verbena, etc. I, myself, will be writing about some of these at some point. But not now. This time my thoughts turn to an old standard -- delicate and refreshing dill.

Dill is one of those herbs that in effect has two different seasons. In early spring it is used for its leaves and then later in fall for its seeds. Each part of the plant has its own characteristics and properties. With its crisp grassy taste, dill leaves, or "dill weed" as it is called, is a natural to be paired with fish, mild cheeses, egg dishes, vegetable dishes, cream sauces, and it is especially good on potatoes. Cucumbers are another food that partners well with dill, either in salads, chilled soups or on tea sandwiches. Dill has a simple, clean taste. When using dill leaves, it is best to use it fresh rather than dried to get the most flavor. If using dill in a hot dish such as a stew or a sauce, be sure to add it just before serving, as it loses its flavor in the heat.

One of my favorite recipes for dill with fish is Gravlax -- the Scandinavian cured salmon dish. The fresh filets of salmon are covered with a mixture of salt, sugar, dill and coarse black pepper. They are then wrapped in plastic wrap and refrigerated with a weight on them for 3-4 days. The result at the end of this time, after the fish has been turned twice a day, is a lightly cured, slightly sweet and salty, tasty appetizer. Serve the gravlax thinly sliced either on triangles of hearty rye bread or on cucumber rounds with a drop of honey mustard.

The seeds have a much more potent flavor, similar to a combination of anise and celery. The flat, yellow flower umbels of late summer give way to the seeds in fall. These can be used in breads, stews, rices, root vegetable dishes and most notably, the making of pickles. I love seeing the long stalks of dill at the farmers markets -- the smell is very rich and spicy. These seed heads, when combined with vinegars, garlic, sugar, salt, and pepper produce the dilled pickles that have that wonderfully puckery quality.

Being native to southern Europe and western Asia, dill requires full sun, good drainage, and rich soil to thrive. Despite its frail appearance, dill (Anethum graveolens) is considered a hardy annual and drought resistant. In mild climates its seeds can be sown in fall to overwinter and produce an early spring crop. Whether planted in fall or in spring, it is best to sow the seeds directly into the ground as they do not transplant well, often flowering prematurely. This can also happen if the plants are overcrowded, lack suffient water, reside in poor soil. Plant dill in clumps to get the maximum, bushy effect. Dill can even be grown indoors if given a sunny location with six hours of light. For a vibrant splash of color, try interspersing the dill with orange pot marigolds. Sowing new batches every two weeks will keep your herb supply constant. Dill sprouts easily and will self-seed. Dill is also a helpful plant to have in the garden since it attracts beneficial insects whose larvae feed on aphids making it a good plant to protect your roses. To harvest dill, just snip what you need with a scissors, leaving the rest of the plant to keep growing.

People were clipping dill as far back as the ancient Greeks, who considered dill to be a sign of wealth. They even flaunted their wealth by burning dill scented oil . On the more practical side, Hippocrates had a recipe for cleaning the mouth: "Clean teeth with ball of Wool dipped in Hone {honey}, rense with 1 tsp. of dill seed boiled in 1/2 cup of white wine." I don't know how well it works, but it sure sounds tasty. In the middle ages, dill was used as an ingredient in love potions, and also as a protection against evil and witchcraft.

It is from the Norse word "dilla" (to lull) that we get our modern word dill. It is for this calmative property that dill is best know medicinally. The dill seeds contain a volatile oil that has a relaxant effect on muscles, especially those of the digestive tract, and has been used for centuries to cure such problems. Teas made with dill seed relieve indigestion and nausea, and produce a lulling effect. Gripe water is made with dill seed specifically as a remedy for colic in infants. Even Charlemagne, in the 8th century knew of the curative properties of dill seed. He ordered crystal vial of it placed on his banquet tables to stop the hiccups of guests who ate and drank too much. Dill is also very rich in minerals, vitamin C and flavanoids. The seeds contain so much calcium that 1 tablespoon contains 100 milligrams -- more than in 1/3 cup of milk.

So whether it is used to cure hiccups and colic, fight aphids in the garden, or turn a fresh side of salmon into a tasty Scandinavian appetizer, dill remains a delicate, calming addition to the home gardener.

Cheery Dill Salad
makes 4 servings
A light, refreshing and colorful salad -- the perfect accompaniment for grilled fish or chicken and a welcome dish at any picnic. An added bonus: it's quick and easy.

Mix the first six ingredients in a glass or stainless steel bowl. Stir until the sugar dissolves. Slice the English cucumber lengthwise and then cut into 1/4 inch segments. Add this to the marinade, along with the radishes and the tomatoes. Toss well to combine flavors. Refrigerate for 1/2 hour, stirring a few times to makes sure everything is equally marinated.