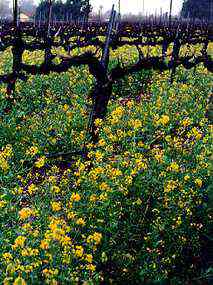 Every spring a minor miracle happens in the valleys and meadows of Northern California where I live. It starts off slowly during the bleakest part of winter when the sky is grey with seemingly endless rain. Trees and bushes are all bare and dormant, waiting for more welcoming conditions before blooming. Then the miracle happens -- the wild mustard appears.

At first there is just a stem or two in a whole field of green, but even this is so bright and golden that it practically shouts. Then it seems that overnight the entire valley is blanketed in mustard's sunny glow. As far as the eye can see, fields have turned into lakes of molten yellow.

It is especially dramatic in the vineyards that blanket this region. Huge expanses of dark, gnarled dormant vines, in tidy rows, are separated by softly swaying pale green stems topped by vivid yellow mustard flowers. It is breathtaking.

Napa Valley even has a Mustard Festival each spring to celebrate this visual delight. It features fine foods, local wines, music, and art displays, complete with a wild mustard photo contest. There are even cooking competitions devoted to mustard.

Although native to most regions in the world, it is believed that the wild mustard was brought to California by Franciscan Father Serra, planting it as a golden pathway to find his way back home to Spain after his explorations here.

Wild mustard's formal name is Brissica rapa, a member of the large and illustrious Cruciferae family which includes cabbages, broccoli, and turnips. It also includes the mustard varieties that are grown for their tasty leaves, not their seeds. Giant red mustard and Osaka purple are two popular varieties of salad mustard. The giant red is easy to grow and its tender young leaves give sandwiches a double treat -- crisp greens and a tangy Dijon mustard taste.

Three varieties of mustards produce seeds, which in turn are used in various aspects of cooking. Black mustard seed (Brassica nigra) is the most pungent of the three. It is used extensively in Indian cooking, giving bite to curries. Brassica alba, a native to the Mediterranean region, produces large yellow seeds. These are the ones most often used whole, either added to marinades or pickling brines, or sautČed as part of a seasoning mix. It is also the mildest of the three, and is often used in the production of American yellow mustard. It is the addition of turmeric that gives "ballpark" mustard its intensely yellow hue. Brown mustard (Brassica juncea) is the one used to make Dijon-style mustards.

For soups and stews, use dry powdered mustard. It is liquid that activates the volatile oils which gives mustard its characteristic sharpness. The degree of heat not only depends on the type of mustard seed (with black being the most potent) but also depends on whether the hull was removed. No or partial shell: stronger taste. More shell: milder taste.

Once the seeds are ground into powder you can add most anything to it to make what is called prepared mustard. It seems to only be limited to ingredients on hand and imagination. There are the familiar varieties: ballpark mustard, Dijon style, honey mustard, and whole grain. Then there are the more exotic flavored mustards: herbed mustards flavored with basil, tarragon, chives, or mint; spicy mustards flavored with chiles, peppercorns, or ginger; and fruit mustards made with lemon, lime, orange or berries. 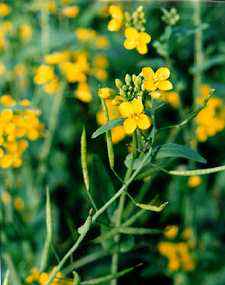 These enhanced mustards give a whole new dimension to sauces, dips and dressings. A tangy berry mustard makes a zippy addition to barbecued pork chops. With lemon herb mustard you have a simple, tasty dressing for chilled salmon just by adding a bit of mayonnaise.

People have been adding prepared mustard, of sorts, to food since the early Roman times. Mustard comes from the Latin "museum ardens" meaning burning must. Must is unfermented grape juice. The Romans would add must to the pounded mustard seeds, releasing its characteristically hot and pungent flavor, thus "burning." This was used as a paste to spread on meat. It probably was originally used as a preservative, and to help conceal rancidity.

Mustard's heating characteristic also makes it valuable as a healing herb, but it is one that must be used judiciously. Too much exposure or contact with the skin can cause irritation. Used in moderation it stimulates circulation, and so is used for chest congestion, toothache, headache, and to relieve sprains and rheumatism. In small doses internally, it stimulates the appetite and aids digestion.

The edible green variety of mustard is also good for your health, being high in magnesium which regulates cholesterol and blood sugar levels. The greens are also quite high in vitamin A and C, both recommended for warding off infections.

All of the varieties of mustard are rather easy to grow, in fact most growers would warn you that they tend to spread rapidly and take over areas. It's so easy to germinate the seeds that it is often a project for school kids to start them between two pieces of damp cloth, a practice called chitting. To grow mustard in the yard, be sure it is in a spot in full sun in rich well drained soil. They are annuals so plant the seeds in early spring, or in mild winter climates, it can be done in late fall.

Depending on the variety, the plants range from 2 to 4 feet tall, made up of long delicate light green stems and narrow leaves, with a tuft of four petalled yellow flowers on top. The mustard grown for seed has long slender pods called a silique. As the summer progresses, these will turn from green to brown. Before they split open, harvest the pods. Spread them to dry on a drying tray covered with tightly woven cloth to dry. In about 2 weeks they will have split open and the seeds are ready to be used whole, ground into powder, or made into prepared mustard. Store the seeds whole in an airtight container until you're ready to use them.

Although wild mustard doesn't produce seeds, nor are the leaves useful for salads, the delicate blossoms do offer a spicy bite and a bright splash when used as a garnish. Add them to your next salad as a sure cure for the winter blahs.

Place the mustard seeds in a dry sautČ pan and cook over medium high heat, constantly swirling the seeds to avoid burning. They are ready when they become fragrant and turn golden brown. Transfer them to a mortar and grind them coarsely. Combine with the remaining ingredients. Makes 8 servings.