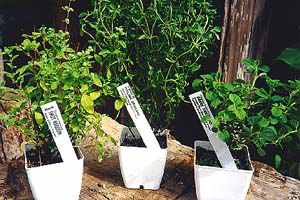 As I began to do my research for this article, I discovered that there is a lot of confusion about Oregano and Marjoram, not only in how things are labeled at the nurseries, but among the experts as well.

Let's start out with the fact that all marjorams are oreganos, since the genus name for both is origanum, but not all oreganos are marjorams. Certainly some of the overlapping comes from the fact that marjoram used to have its own genus. Now oregano is the genus and marjoram, or sweet marjoram (Origanum majorana) is only one variety of over fifty types of oregano. Pot marjoram (Origanum onites) is another variety, but even this causes confusion, sometimes being called Cretan oregano because of its place of origin. There is even confusion outside the genus itself. In Puerto Rico there is a variety of coleus (Coleus anboinicus) which is marketed as oregano and often used in combination with bay leaf and celery as a traditional Cuban seasoning. In Spain there is Thymus nummularius, and in Mexico there is Lippia graveolens; both sold and used in place of oregano. One last example of how it all gets jumbled: Origanum vulgare, or what is taken for common oregano, is also known as wild marjoram!

Whether oregano or marjoram, they all are members of the Lamiaceae family, the mint family. Plants belonging to this family are easily recognized by their square stems and opposing pairs of leaves. They also have whorled flower spikes. Many of the familiar culinary herbs are from this family: mint, basil, oregano and sage.

Marjoram and oregano are similar in appearance. Both have woody stems, and an upright nature, reaching a size of about 2 1/2' tall and about the same wide. Oregano tends to get leggier and more sprawling if left unclipped. Because of its more compact habit marjoram was and is often used in English knot gardens. The flower buds at the end of the stems are covered with modified leaves called bracts which gives them the appearance, until they blossom, of tiny green pine cones. Flowers appear in summer and will last well into the fall. Oregano usually has pinkish purple flowers, marjoram usually has white blossoms. The shape and color of the leaves differ between oregano and marjoram, as well as among the different varieties. In my garden I even grow a golden-leafed, ground cover variety of oregano: O. vulgaris variety "Aureum." It adds a interesting contrast to the rest of the greens in the garden. In general, the leaves of marjoram tend to be softer in color, more gray green, and smaller in size. All the leaves are oval to spade shaped. The texture of the leaves in the oreganos is usually more coarse and fuzzy, such as the Cuban oregano.

Although oregano is considered to be a perennial herb, marjoram's more delicate character has it classified as a summer annual in most regions. Both enjoy bright sunlight and are not too fussy about soil type. Their moisture needs differ. Marjoram prefers to be in soil that is moist whereas oregano prefers drier conditions. Start both herbs either from seed in spring, from cuttings in the summer or root divisions in the fall. Growing them in pots works well, given plenty of light. Try putting together a pot of Mediterranean herbs to keep near at hand in the kitchen. It is very decorative as they grow and blossom, and handy for a quick, fresh addition to whatever is cooking. I find that if the herbs are right there I will tend to use them more often, and in new ways. Rosemary, sage and thyme work well together in pots along with oregano -- they all like the same moisture level, and they are often used together in cooking.

Whether planted in pots or the ground, be sure to keep the flower buds pinched back to keep them from getting rangy and going to seed. Given the proper conditions, you should be able to harvest leaves until the first frost (if outdoors) or all year long, if in pots inside. You can start using the leaves, a few sprigs at a time, once the leaf stems reach 4" tall.

Marjoram leaves are best used fresh, as their flavor is sweeter and milder. For this reason it is also best to add them at the last moment when you use them for cooking. Marjoram has a slightly mintly, citrusy taste. Use marjoram's fresh taste to enhance salad dressings, seafood sauces, soups, and poultry. A chicken that has been rubbed with garlic, salt, course black pepper and marjoram, then grilled makes a quick and delectable summer treat -- one of my favorites. Marjoram's flavor also works well with cheese, tomato, bean or egg dishes. Marjoram is most often used in recipes of French or English origin, whereas oregano's more robust flavor is often called for in the recipes of Italian, Greek, North African and Mexican cuisines.

Oregano's pungent, spicy flavor makes it a perfect match for tomato based sauces, eggplant, seafood, and grilled meats. Italian dishes are practically synonymous with oregano; it is hard to imagine pasta sauce or pizza without it. Oregano's rich flavor deepens and melds flavors of soups and sauces without overwhelming the dish. Because it retains its flavor well, oregano can be used either fresh or dried. If you are using the fresh herb, use twice the amount of it as you would the dried called for in a recipe.

Despite the heavy association of oregano with Italy, it is likely that oregano originated in Greece. Ancients Greeks used to let their cattle graze on fields of oregano, in the belief that it produced tastier meat. Even the name oregano comes from the Greek, meaning "joy of the mountain." Marjoram also enjoys a long and favorable history. Both the ancient Greeks and Romans would crown bridal couples with wreaths of marjoram to symbolize love, honor and happiness. Over the years marjoram has been used as a remedy to aid digestion. Marjoram and oregano continue to be used as a steam inhalant to clear the sinuses and relieve laryngitis. European singers have been known to preserve their voices with marjoram tea sweetened with honey. According to herbalist Dodoen, in the 16th century, smelling marjoram "mundifieth (cleanses) the brayne."

With so many varieties of oregano, I enjoy having many different types in my garden at once so I can choose just the right flavor for a dish: a course and tangy Greek oregano for moussaka; an aromatic Italian oregano for my pizza dough; or a perfumey sweet marjoram for my summer salad dressing. I advise you to do the same and let your nose and taste buds be your guide, (rather than the confusing labels!) when you choose oregano for your garden.

Confetti Polenta with Marjoram
serves 8 as a side dish, 4 as a light main course
A festive twist on an old classic. This polenta makes a quick and delicious accompaniment for grilled meat or fish, yet is substantial enough to be a light summer lunch when topped with fresh tomato coulis and grated Parmesan cheese.

Combine the first six ingredients in a pot and bring to a boil. Add the polenta in a steady stream, stirring constantly, and reduce heat to a simmer. Continue to cook and stir until it has absorbed most of the liquid and has a creamy texture. Add the vegetables and cheese and cook for 1 more minute. Whip the marjoram into the polenta and when it is well distributed, pour the polenta into an 11" glass pie plate. Once the polenta cools it can be cut into wedges to be served either hot or cold.