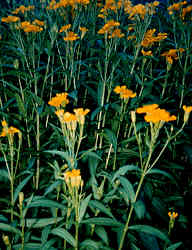 What could be more comforting against the cold and damp of a stormy January day than a bowl of home made soup, enjoyed by the glow of a crackling fire? White beans are the basis for a soup that I find fits the bill ideally. The beans make it hearty and filling, a bit of julienned ham adds just enough smokiness without being heavy, especially on the heels of December's gastronomic overindulgence. What really sets this soup apart from all the other bean soups is the seasoning: the sweet, licorice flavor of fresh tarragon, just picked from the garden.

Tarragon is called the "King of Herbs" by the French, and with good reason. It is the main flavoring in many of the sauces that form the foundation of classic French cuisine, such as baàrnaise, rigavote and tartare. When paired with chopped sprigs of fresh parsley, chives, and chervil, you have the traditional seasoning blend known as fines herbs. This aromatic blend enhances the flavors of egg, chicken and fish dishes, and is also used as a basis for salad dressings. When using tarragon in cooked dishes, it is best to add it at the end, as heat tends to decrease its flavor. Unlike most of the other herbs, tarragon loses the potency of its flavor when dried. This may be one reason it is so frequently preserved in vinegar, which captures tarragon's essence and creates a tasty condiment that can be used in dressings, mayonnaise and as a zesty deglazing alternative to wine.

French tarragon (Artemisia dracunculus) is the variety most often used in recipes. Its flavor is sweeter and its leaves are more delicate than its relative Russian tarragon, (Artemesia dracunculoides), which tends to have coarser, paler leaves and a bitter, inferior flavor. Unfortunately, whereas the Russian variety spreads and reproduces easily, French tarragon cannot be propagated by seed but must be cultivated by cuttings and root divisions. For a healthy plant, it requires rich, well drained soil and full sun.

While most herbs have a long history of use as medicines, and a equally long list of the ailments they were supposed to cure, tarragon's list is relatively short. This is most likely due to the fact that tarragon loses its aromatic volatile oils as the herb dries.

Tarragon was used by the ancient Greeks as a remedy for toothache. Today we know that tarragon contains an anesthetic chemical, eugenol, which is the major constituent of anesthetic clove oil, making its use for temporary pain relief understandable. During medieval times there was a belief, called the Doctrine of Signatures, which stated that an herb's appearance revealed its medicinal value. According to this philosophy, tarragon was thought to cure snake bites, due to the serpentine shape of its roots. Even tarragon's species name, dracunculus, comes from the Latin for dragon, again referring to the shape of its root, and adding to the myth of curing bites from venomous beasts and mad dogs.

French tarragon's generic name, Artemisia, comes from the Greek goddess Artemis, goddess of the moon. Many of the plants in that family, Dusty Miller and Sagebush for example, have a soft, silvery color, as if bathed in moonbeams. The common name, tarragon, is thought to be a corruption of the Arabic word "tarkhum" meaning little dragon.

Although tarragon is most closely associated with French and European cuisine, it was not cultivated in Europe until the late 1500's, when the Tudor family introduced it into the royal gardens, from its origins in Siberia. Later, when the colonists settled in America, they brought along tarragon for their kitchen gardens, along with burnett to flavor ale, horehound for cough syrup and chamomile for soothing tea and insect repellent.

There is another variety of tarragon which makes an attractive addition to the garden, as well as a welcome ingredient in the kitchen. It is actually a member of the marigold family (Tagetes lucida), commonly called Mexican marigold or winter tarragon. Given full sun and good drainage, the plant grows to a height of about 2 1/2 feet and is quite bushy. In the late fall it produces a lavish display of tiny golden flowers at the end of its long, erect stems. With the delicate flowers and contrasting rich green tapered leaves, these branches make interesting additions to floral arrangements, especially with the fragrance of the herb itself adding an extra element to enjoy. The stems also add the perfect finishing touch to a decorative bottle of herb vinegar.

The flavor of this variety is a bit spicier than that of French tarragon, having an accent of cinnamon in addition to the sweet licorice taste normally associated with tarragon. It can be used in the same manner as French tarragon, and gives whatever dish it is in an extra dimension of zest. Best of all, this wonderfully hardy perennial keeps on producing all through the winter, long after the far more fragile French tarragon has gone dormant, allowing you to enjoy garden fresh tarragon all year.

Sort through the beans to remove rocks and other items. Put in a container and cover with four inches of water. Soak overnight. Drain off the water.

In a stainless steel pot heat the olive oil. Sautà the onion and the fennel until golden. Add the grated lemon peel and the garlic. Cook for one minute to release the flavors. Add the stock, cover the pot and reduce the heat to a simmer. Cook the beans until soft, about one hour.

Stir in the tarragon, reserving 1/2 teaspoon to use for garnish. Add the ham, stirring to blend all flavors. Add salt and pepper to taste. Ladle into decorative soup bowls and garnish with the remaining tarragon.

* French tarragon can be substituted for winter tarragon.