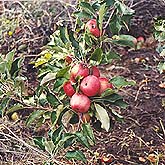 I can still hear the wonderful tenor Dennis Day singing these lyrics, part of a song on one of my favorite childhood record albums, "The Legend of Johnny Appleseed." To my young mind, this colorful folk character, who went barefoot and wore a tin saucepot for a hat was fictional, as was Paul Bunyan. Imagine my surprise when, years later, I discovered that-although Johnny Appleseed was most certainly part of American frontier folklore-he was also a "real" person by the name of John Chapman.

Massachusetts-born in 1774, Chapman, carrying apple seeds from Philadelphia cider presses, settled in the Ohio River valley around 1801 and devoted his life to the proliferation and care of apples. This eccentric free spirit, affectionately called Johnny Appleseed, wandered throughout Ohio, Illinois and Indiana planting apple-seedling nurseries, tending apple orchards, and spreading the Swedenborgian philosophy of love and wisdom. Before dying in 1845, he'd planted apple orchards over an estimated area of ten thousand square miles. What a gift he gave to us all. So let's all tip our tin hats to this gentle soul-thank you, Johnny Appleseed, for so generously sharing the fruits of your labor.

These two quotes come under the heading of "different strokes for different folks":

"Coleridge holds that a man cannot have a pure mind who refuse apple-dumplings. I am not certain but what he is right." -Charles Lamb, English writer

* Buy firm, well-colored apples with a fresh, not musty, fragrance. The skins should be tight, smooth and free of bruises and punctures. A dry, tan- or brown-colored area (called "scald") on an apple's skin is slightly tough, but doesn't usually affect flavor or quality.

* Store apples in a cool, dark place or refrigerate in a plastic bag. Apple will keep longer if they don't touch each other during storage.

* To keep cut apples from browning, toss with lemon, orange or grapefruit juice, or dip them in 1 quart of cold water mixed with 3 tablespoons of lemon juice. Or, dip the apple pieces in lightly salted water. There's also a "color keeper" product made with ascorbic acid that's commonly available in supermarkets.

* If you're using apples in a salad with a vinaigrette, the acid in the dressing will keep the fruit from turning brown.

* Provide more support for baked apples by setting them in lightly greased muffin tins before baking.

* The skins of baked apples won't crack or burst if you cut several shallow slits around the sides of the fruit from which the steam can escape during baking.

* Reduce baked apple shrinkage by removing a 1/2-inch horizontal strip of peel from around the middle.

* For a wonderful breakfast dish, make sausage-stuffed baked apples. Core the apples and scoop out all but about a 3/4-inch shell. Chop the scooped-out apple, combine it with crisp, crumbled sausage, raisins and a dash of nutmeg. Return the mixture to the apple cavities and bake for about 45 minutes.

* Cooked apples pair nicely with meats like chicken, pork or veal, and vegetables like cabbage, onions or potatoes. They also compliment many soups and stews.

* If you want cooked apples to hold their shape, add any sugar called for in the recipe at the beginning of the cooking time.

* Apples that are past their prime lose moisture and flavor. Revive them by chopping coarsely, then covering with very cold apple juice or ice water, and refrigerating for 30 minutes.

* Dried apples can be stored indefinitely if refrigerated tightly sealed in a plastic bag.

Yet Another Myth Conception

"Adam was but human -- this explains it all. He did not want the apple for the apple's sake, he wanted it only because it was forbidden." -- Mark Twain

Although legend has it that the apple was the forbidden fruit offered by Eve to Adam in the Garden of Eden, archaeologists tell us that's not probable. You see, apples didn't grow in the Middle East when Genesis is thought to have been written. Indeed the Bible's words describing the tree of knowledge are not at all specific: " . . . good for food and pleasant to the eyes, and a tree to be desired to make one wise." For all we know, the fruit of temptation might more likely have been a luscious apricot.

The word "apple" has been used in dozens of ways in everyday language. Here are a few of the more popular terms heard down through the ages:

Apple cheeks: Cheeks that have a healthy, rosy-red appearance.
Applejack: A potent brandy made from apple cider.
Appleknocker: American slang for an unsophisticated country person; also for a fruit picker.
Apple of discord: A golden apple inscribed with "For the fairest," thrown by Eris, the Greek goddess of discord, among a gathering of the gods. Paris gave this infamous apple to Aphrodite because she offered him the most beautiful woman in the world-Helen of Troy-whose abduction by Paris caused the Trojan War.
Apple of (one's) eye: A person who's treasured above others.
Apple-pie bed: One that's been short-sheeted; also called simply "pie bed."
Apple pie order: Neat, ordered and everything in its place.
Apple polisher: One who fawns over someone in hopes of gaining favor or an advantage.
Applesauce: Nonsense.
Bad apple: A person who's dishonest or a malcontent.
Full of applesauce: One who's full of hot air, nonsense or similar rubbish.
Love apple: A name once used for the tomato.
Upset the applecart: To ruin someone's plans.
Wise apple: A smart alec.
An apple a day keeps the doctor away: Good to know if you have an HMO.

Spicy Fresh Applesauce
Makes about 3 cups
This fresh-tasting, speedy applesauce is wonderful drizzled with cream or spooned over pancakes, waffles or warm gingerbread. A combination of red and green apples makes a festive Christmastime applesauce.

Stir salt into a large bowl of cold water. Add apple chunks; soak 5 minutes to prevent discoloration. Thoroughly drain apples. In a food processor fitted with the metal blade or in a blender, process all ingredients until desired texture (chunky or fine) is obtained. Stop machine and stir down apples as necessary for even processing. Serve immediately.

(FROM NEVER EAT MORE THAN YOU CAN LIFT, BY SHARON TYLER HERBST)

Apple-Brie Bisque
Make 8 to 10 servings
Besides its luxurious flavor, one of the nicest features of this bisque is that it can be prepared up to two days in advance. The shredded apple garnish, however, should be prepared the same day. Use the food processor to make quick work of slicing the onions and apples, as well as for grating the apple garnish. The blender does a better job of pureeing the soup. Just be sure to begin at the lowest speed, gradually increasing to high, so the hot liquid doesn't explode out of the blender top.

Melt 2 tablespoons butter in a large saucepan. Saute onions over medium heat until golden brown. Add chicken or vegetable broth; bring to a boil. Add sliced or chopped apples, garlic, star anise and vinegar. Return to boil. Reduce heat; cover and simmer 30 minutes. Stir in Brie and cream; cook additional 5 minutes. Use blender to puree soup in 2 batches, beginning at low speed, gradually increasing to high. Pour soup through a medium-fine strainer back into pan. Season to taste with salt and pepper. Bisque may be refrigerated at this point and reheated over low heat before serving. Do not return to a boil.

For apple garnish: In a medium skillet over medium heat, melt remaining 2 tablespoons butter. Add shredded apples; saute just until they begin to soften. Remove from heat; cool to room temperature. Apples may be covered and refrigerated for up to 8 hours. Remove from refrigerator 30 minutes before serving. Float about a tablespoon of shredded apples on the top of each serving; sprinkle lightly with nutmeg.

Hot Apple Toddy
Makes 1 drink
"If I think I'm about to get a cold and feel achy and chilled, I know it's time for hot [apple] cider with rum." -Joyce Goldstein, American chef, author

Stud lemon slice with cloves; drop into a heatproof mug. Add sugar, nutmeg and rum; top with cider. Stir with cinnamon stick, leaving it in drink as garnish.

(FROM THE ULTIMATE A-TO-Z BAR GUIDE,
BY SHARON TYLER HERBST AND RON HERBST)