cucumbers, celery and zucchini, oh my! 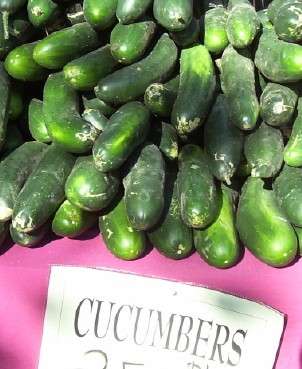 There are two mainstream vegetables that I typically don’t use in my cooking – cucumbers and celery.

I dislike celery because I can’t warm up to a food that takes more energy to eat than the calories it contains. Or something like that.  Ultimately, I think it really comes down to the cardboard taste of most celery.

Why I don’t like cucumbers remains a mystery to me. The taste is okay, but used in green salads it seems to overwhelm the dish.  Now, through this CSA, I have faced my vegetable biases and finally learned to like, if not love, cucumbers.

For the last two weeks, I’ve received cucumbers in my market basket. The first week, it was a rather ordinary, green cucumber. I tried to ignore it. However, this week, I received six small, yellow, lemon cucumbers. They were different enough that I couldn’t ignore them. So, I made a cucumber salad and have included the recipe for it in this article.

The weather here has been hot, unusually hot for the Pacific Northwest, so I’m trying not to use the oven at all and the stove as little as possible.  I also wanted to use the zucchini and basil that was in this week’s basket. I’m afraid if I get too far behind in my zucchini use, it will overtake me! For all those reasons, I decided to make an angel hair pasta with a non-cook sauce.  See the recipe in this article.

During hot weather, there’s nothing like a cucumber salad. I used a mixture of a regular green cucumber and lemon cucumbers.  I like to serve this salad very cold.

In a large bowl, toss the tomatoes, cucumbers, onion, olive oil and lemon juice together.  Serve the salad on a platter and sprinkle with black sesame seeds, if using.

This is another great dish when it’s hot outside. The pasta cooks in just minutes and the sauce is not cooked at all. I used spinach angel hair pasta, but this is also good with plain angel hair pasta.

In a large bowl, toss the tomatoes with the basil, parsley, salt, red pepper flakes and olive oil.

In a large pot of boiling salted water, cook the angel hair pasta for 2 minutes (follow package directions), until al dente. Drain well and add the pasta to the tomato mixture. Add the zucchini and toss. Add the ¼ cup of parmesan cheese and toss again.  Serve immediately in bowls, passing more cheese at the table.