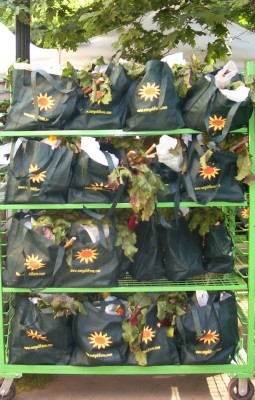 Before I joined a CSA, I went to the Portland Farmers Market occasionally, maybe once or twice a month and to the small local market across the street from my house every week.

Now I’m becoming a regular at the Portland Farmers Market and loving it. Since I know what is in my market basket – Vicki at the CSA emails us a day or so in advance – I take a stroll around the market before picking up my basket.

The market officially opens at 8:30 a.m. so early birds like me stroll around the market, watching the farmers set up, and getting a sneak peak at what’s available.  At 8:30 a bell rings and everyone cheers as the market opens.

Looking around this morning, I see that morels are available at the mushroom vendor and I will definitely pick up some, along with other varieties.  All kinds of berries – raspberries, strawberries, blackberries – are available. I’m thinking of buying some blueberries to eat now and freeze for later.

The harvest basket this week contains rhubarb, edible pod peas, lettuce, onion, dry beans, beets, broccoli and/or cauliflower, and a potted marigold flower. I am particularly interested in the edible pod peas.  I recall eating them raw as a child; I hope they taste as delicious as I remember. 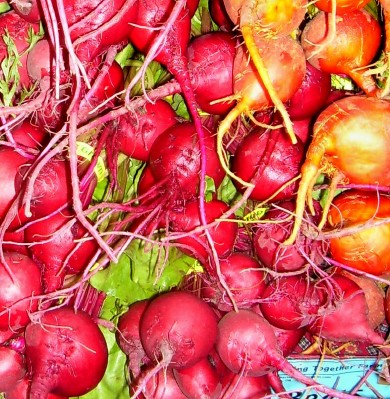 This week I wanted to cook the rhubarb, but wasn’t interested in a pie or crumble.  I wanted something that I could serve with grilled meats so I settled on a Rhubarb Chutney (recipe follows).

I also wanted to do something special with the broccoli so I made a gratin (recipe follows). The weather is getting warmer here in Portland so I won’t be using the oven as much so this gratin is indeed special.

I’ve never done much cooking with rhubarb, mainly because I’m not a baker.  This is an easy recipe that comes together quickly. I used superfine sugar since I had some in the pantry, but regular granulated sugar works just as well.

2 tablespoons butter
2 to 3 tablespoons superfine or granulated sugar, to taste
1 tablespoon lemon juice
¼ cup balsamic or red wine vinegar
2 to 3 stalks rhubarb, trimmed and chopped in ½ - 1 inch cubes
¼ cup golden raisins, currants, or craisins
In a medium saucepan over medium heat, melt the butter. Add sugar, lemon juice and vinegar; bring to a boil. Add rhubarb and raisins and cook 5 - 10 minutes until rhubarb is tender, but not mushy.  Serve at room temperature.
Variation: Cherries are also in season now so as a variation to this basic recipe, I might sauté some pitted cherries in port or red wine and then add to the basic chutney. This variation would be great with grilled duck breast. 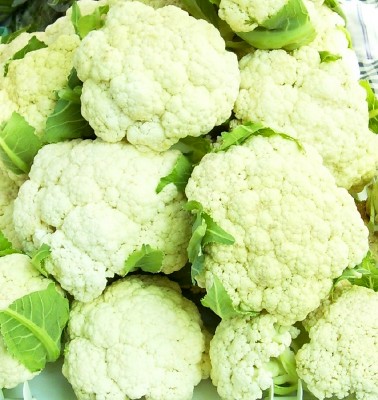 Most of the time, I simply steam vegetables. But sometimes I want to show off and when I do, I make a gratin.  Gratins are fairly easy and the wow factor really makes the extra work (after all, steaming takes no work!) worth it.

Preheat the oven to 400 degrees F.

Over low heat, warm half the butter in a heavy casserole, add the onions, and sweat, covered, stirring occasionally with a wooden spoon, for about 30 minutes, or until melting but uncolored. Add the broccoli/cauliflower; salt and cook, first covered, then uncovered until tender but not falling apart.

In a medium saucepan, sprinkle the onion and broccoli/cauliflower with flour and stir gently. Raise the heat somewhat and add the milk, a few spoonfuls at a time, stirring until the sauce boils before adding more milk.  Simmer gently for 10 minutes before seasoning with pepper, tasting for salt, and pouring the mixture into a buttered gratin dish.  Mix together the cheese and bread crumbs, sprinkle over the surface, distribute the shavings of butter on top and bake for 20 minutes, or until golden.  Serve hot or room temperature.