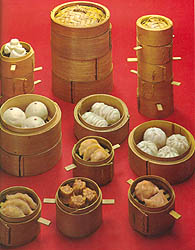 One quarter of the world lives by the lunar calendar. And in Asian communities the beginning of a new year, usually in February, is cause for much celebration. This year is the Year of the Ram and runs from Saturday, February 1th through Saturday, February 15th.

In the same way that Easter coincides with the birth of spring and is therefore observed in Christian communities as a renewal and respite from the chill of winter, so too the lunar New Year, comes as a harbinger of spring.

There is almost no time of year more festive in Chinese communities. The excitement and bustle of New Years builds to a fever pitch culminating in San Francisco and other cities in a festive New Years parade.

In the first day of the two-week New Year celebration, householders can be seen carrying home sprays of quince branches - there early rosy blossoms bringing the first blush of renewal.

Women pick through fruit stands for bright-colored tangerines and order crisp-roasted suckling pigs for family feasts. Shops selling sweet candies and sugar-preserved fruits, that will be given as gifts or served at parties, also do a brisk business.

Joyful children look forward to the big parade, dancing dragon, the sound of ear-splitting firecrackers and lucky red envelopes, containing money, which relatives will bestow on them at family gatherings.

Besides home-based family parties there is no better way to celebrate the New Year than by enjoying a dim sum (pronounced deem sum) brunch. Dim sum is Cantonese for "heart's delight." Before grazing became popular in contemporary American restaurants, these delightful small savory and sweet appetizer-sized snacks were popular.

Although there are a few exceptions, in most dim sum venues, the dim sum dishes circulate through the dining room on heated carts pushed by servers. At a small number of restaurants, dim sum is ordered from a menu, made to order, and brought on a tray.

The downside of not having patience, as the carts make their way through the dining room, is that a patron who jumps at all the early offerings may not have room for the delicious delights that may come later.

In fact, the Chinese have a saying that describes how to eat dim sum: Await! Avoid! Attack!

Usually if you're seated near the kitchen in a western restaurant, it is considered a bad table, but at a dim sum lunch being next to the kitchen is an advantage. You get first dibs at what is rolling out of the kitchen and it is also piping hot.

Tasting tea is an important part of the dim sum experience, and is often overlooked by non-Chinese who venture out for a dim sum lunch or brunch. But to Chinese, dim sum eating is also known as "yum cha" or
taking tea. Tea has been a part of Chinese culture since 2700 BC. And as cities developed so did restful teahouses, usually patronized twice a day, in the morning and in the afternoon. Small snacks or dim sum
developed as a part of the tea drinking experience.

Always ask what kinds of tea the restaurant is serving and order a couple. Oolong goes well with most dishes, Po-lay, a strong fermented tea is good with fried dishes, chrysanthemum and delicate jasmine are perfect with sweet desserts.

Many years ago, both in dim sum restaurants in San Francisco and elsewhere, the waiter tallied your bill from the number of plates left on the table. But nowadays, the server stamps your check as you go along, with different parts of the bill separated into zones for lower priced to medium to higher priced dishes. A dim sum order usually contains three or four dumplings or three or four small servings, for example four sweet and sour spareribs equals an order.

In my hometown, San Francisco, our favorite dim sum venues are Empress Harbor Restaurant and Yank Sing. They are both very popular with dim sum aficionados. Prices at both are well above any of the other houses in the city.

At both Harbor Village and Yank Sing, the atmosphere during dim sum service, can get frenetic with the flow of carts, patrons vying for tables, plus waiters bringing beverages and larger dishes like noodles or stir-frys.

Yank Sing is a bit more serene than the other houses. Look for over three dozen choices including a rolling cart from which the server slices slivers of Peking roast duck and places the succulent morsels in puffy buns with hoisin sauce. The shrimp toast here is one of the best in the city, oil free and crisp. Another unique taste is the bacon, prawn and scallion roll; perhaps a nod to western tastes, but delicious nonetheless. Prices range from $2.70 to $3.75 to $6.75 a plate.

If you snag the right table at Empress Harbor you will have delicious dim sum and a Bay view. And unlike some dim sum houses, they have a full bar, whereas most houses serve only wine and beer. Those who don't like tea think a frosty beer goes well with the treats. The surroundings at Harbor Village also set it apart such as antiques, plush rugs, classic mahogany chairs and tables. Here you will have over 50 different dim sum to choose from. Chinese broccoli with oyster sauce is crunchy and refreshing, as are the sweet baby ribs or roast pork. Because it is so authentic, some challenging dishes will also make the rounds, chicken feet, two kinds of tripe, and shark fin filled dumplings. Don't miss the sliced goose, surrounded by crunchy jellyfish strands, or the golden shrimp puffs. Prices range from $2.60 to $3.30 to $4.30 to $6.30 a plate.

And noted in brief:

In my travels around the country, I usually like to enjoy dim sum at Sunday brunch. And if you stick to the steamed dishes, not the fried ones, a dim sum lunch is less treacherous to your diet than an order of eggs Benedict.

In Manhattan, I've tried some of the dim sum palaces on East Broadway, especially liking the Golden Unicorn. Like a lot of Hong Kong-style places, this eatery spans three floors. "Chaotic" just begins to describe the scene on Sundays. The usual fare includes steamed, fried and baked goodies. A dim sum lunch for two ran about $24. Be prepared for the noise and the wait. But it is all good.

For celebrity watching we did stop by Ruby Foo's Dim Sum & Sushi Palace. The menu is a mélange of Thai, Chinese and Japanese food. Our hearts stopped not at the luxurious décor, but at the menu's high prices. We settled for some appetizers and slunk away into the night. For those prices we want to see the Donald, at the very least.

In Seattle I haul myself over to South Weller. This is where the restaurants selling good Vietnamese pho soup, all manner of regional Chinese fare and the barbecue pork and duck-noodles shops live.

I don't mind that busloads of tourists cram into Ocean City Restaurant, a gigantic Hong Kong style-dim sum eatery in the International District of Seattle. On a trip last year, we spent only $20 for dim sum lunch for two. We feasted on a great array, including the fried won ton, taro balls filled with meat, the tender beef balls with spinach, steamed spareribs with garlic, baked sausage buns, shrimp and pork dumplings. We even had room for a flaky egg custard tart. As we waddled away, we spotted Ocean City's adjacent, quick-service noodle shop.

We did hear about another good spot, but it was in Bellevue, and we vowed to try Noble Court next time. We hear the seafood comes from pristine tanks and like in Hong Kong is simply and expertly prepared.

We went to Los Angeles confident that we would have no problem feeding our dim sum addiction, because we knew that there was a Harbor Village in nearby Monterey Park, outside LA. Its sister restaurant is in San
Francisco, so we were confident of a great dining experience. And we had heard nothing but good things about the branch, including the fact that they serve over 70 different dim sum dishes. As with the San Francisco restaurant, the décor is upscale and the service is exemplary.

We loved the individually fried turnip cakes, prepared tableside, and even indulged our taste for the exotic with some savory steamed chicken feet. The red-lacquered barbecue pork was tender and moist, while the flaky
pork buns made me over indulge and eat two. For dessert we had some delicate almond custard, refreshing and light.

On another weekday, we wound up in Los Angeles' funky Chinatown at Empress Pavilion. Like a lot of Hong Kong style places you can't call the dining room cozy, as it seats almost 600. We expected good shrimp
and pork dumplings, but what really wowed us were the delicate dumplings filled with minced chicken and pine nuts. Another unique treat was the winter melon balls stuffed with pork and shredded dried scallops.

We also tried the egg rolls and a couple of the other fried offerings, but did find them a tad oily. Our advice is to stick to the steamed and baked dim sum, and always order a stir-fried vegetable dish or nice noodle dish to complement your selections.

GraceAnn Walden, has written a weekly column entitled the "Inside Scoop" for the San Francisco Chronicle since 1991. She covers the local restaurant scene, the activities of super chefs as well as trends in the industry. She conducts walking tours of North Beach, the Mission District and Nob Hill in San Francisco.