knife and pork: the chocolate-and-bacon craze

You walk into a chocolate boutique and are surrounded by the usual suspects: truffles, toffees, bonbons, and bars. Suddenly, you notice an employee carefully dipping what seem to be strips of cooked bacon into melted chocolate. If this surprises you, then you, my friend, are out of the chocolate loop, because the combination of chocolate and bacon has taken off like a rocket over the past couple of years. Chocolatiers are offering chocolate bars with bacon, chocolate-covered bacon, bacon brittle covered in chocolate, enrobed bacon caramels, chocolate cupcakes with bacon, and more (I haven’t heard of a bacon hot chocolate yet, but I’m sure it’s just a question of time!).

At first thought, you might be repulsed by the combination. But think about it for a minute: you have the crisp, salty, smoky goodness of bacon (sometimes called “the candy of meat”) and the creaminess, subtle sweetness, and earthy/cocoa-y taste of chocolate. There’s textural as well as flavor contrast, and for those who enjoy such differences in one food, the combination can be tough to beat. It’s long been known that a small amount of salt makes chocolate taste more chocolatey. And people adore these two foods individually, so this is a case where two rights don’t make a wrong (unless you’re a nutritionist).

According to Joel Stein in a 2009 article in Time, the mass-market chocolate-and-bacon phenomenon was started by a Chicago chocolatier in 2007, via the addition of bacon to a chocolate bar. To the complete surprise of the chocolatier, that bar became her best-selling item. I don’t know whether this original bacon bar used milk or dark chocolate, but needless to say it is now available in both. In fact, milk and dark chocolate seem to share equal popularity when it comes to bacon. I haven’t seen many chocolate-and-bacon combinations featuring white chocolate, but my guess is that white chocolate wouldn’t be optimal in such a mix. The chocolate would probably be too sweet, and there might be too much of a dairy element. White chocolate also lacks the earthy/cocoa-y character that makes the bacon-chocolate blend attractive to so many.

I have to admit that my first reaction to this combination was to dismiss it as ridiculous. I was sure it was just another manifestation of the desire to do something different. With so many chocolatiers competing for your money, and so many selling similar chocolate products, the desire/need to be able to offer something truly distinctive to consumers can sometimes result in amalgamations I consider overly ambitious, to say the least. If you’re a regular reader of this column, you know I have some definite opinions, and I simply do not think that chocolate goes with many ingredients added to it in these days of new culinary frontiers. But I was wrong in this case; I’ve had chocolate-and-bacon treats that were nothing less than delightful. You have to get your blend right. The chocolate can’t overwhelm the bacon (and vice versa), and the bacon can’t be rancid or too salty. But a well-executed mix of the two, surreal as it may sound, can be brilliant.

One of the best aspects of this duo from a creativity standpoint is that the permutations and combinations are practically limitless. Almost everyone reading this will have tasted different brands of chocolate and chocolates with varying percentages of cacao content. But the number of fine-quality bacons now being produced in the US is very gratifying. There are bacons smoked over different woods (hickory, apple, maple, alder) and bacons from different parts of the animal and bacons with different flavors (jalapeno, garlic, chipotle, cinnamon-sugar, maple, brown sugar) and bacons with assorted types of cures. With so many good chocolates, and so many better bacons, the possibilities for a great pairing are myriad. Encourage your favorite chocolatier to experiment; he or she might find a combination both of you will love. (I’m going to depart from tradition here and recommend a bacon, specifically, the bacon produced by Vermont Smoke and Cure, www.vtsmokeandcure.com. If you’d like to research some other artisanally-produced bacons available in the US, head over to Dan Philips’ website, The Grateful Palate, at www.gratefulpalate.com.)

Incidentally, if you think that enrobed bacon brittle or chocolate-dipped bacon is pushing the envelope as far as it will go, be prepared to revise your opinion! At this writing, Knott’s Berry Farm has added a Chocolate Bacon Funnel Cake to their menu; while the idea started out as a joke, it proved so popular that it has been added to the permanent menu. And there exists in US a mad kitchen scientist who has concocted the Bacon Moon Pie (see the description of this under Chocolate Recommendations). I salute such inventiveness and expect to see many more examples of it.

One of the few downsides of chocolate-bacon combinations is that not all of them are easily transportable. Recognizing the unpredictability of shipping conditions and the delicacy of both chocolate and bacon, some manufacturers of goodies using these two ingredients make them available only in-store. There are chocolatiers who will ship their chocolate-and-bacon delights, of course, but bear in mind that you may have to pay extra for cold packs and/or expedited shipping, especially during the warmer months.

Chocolate and bacon…not just for breakfast (or dessert) any more!

Chocolate Recommendations: As a rule, I’ll give you a recommendation of something I’ve tried fairly recently. I can’t do that here, because I haven’t tried many chocolate-and-bacon confections of late. What I can do is point out some establishments that make these treats. Let your imaginations, taste buds, and wallets be your guide, as I have not tried most of these products. The companies below do ship, except as noted. They are in no particular order. 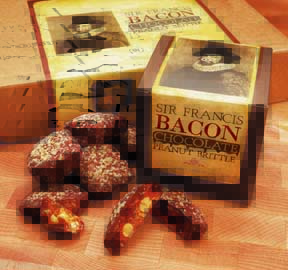 I love the pun! Bacon peanut brittle and bacon chocolate peanut brittle. A friend swears by the latter, telling me the manufacturer has gotten the flavor balance just about perfect. 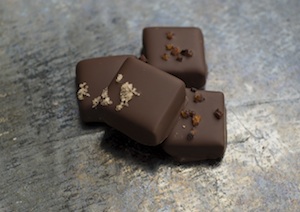 ---The Yellow Leaf Cupcake Company, www.theyellowleafcupcake.com.
A Sweet and Salty Chocolate Bacon Cupcake is on the menu here, along with over 100 (!) other cupcake flavors. A chocolate cupcake with crumbled bacon inside and more crumbled bacon both underneath and on top of a chocolate ganache frosting. They do not ship. In the Belltown Neighborhood of Seattle, WA; call before you go, as these aren’t available every day. 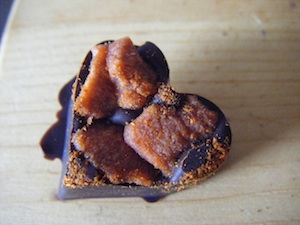 Look for “Homemade Chocolate by the Box”; under “Dark Chocolate”, you’ll find the Spicy Bacon flavor. Note to parents: the website contains adult language, but the blog perspective on all kinds of foods is amusing and intriguing.

---Roni-Sue’s Chocolates, www.roni-sue.com.
Bacon Buttercrunch (chopped, fried bacon is added to toffee; the toffee is then dipped in dark milk chocolate and coated with chili-spiked red-skin peanuts) and Pig Candy (fried bacon strips, dipped in milk or dark chocolate). These folks were on the chocolate-and-bacon bandwagon earlier than many others. 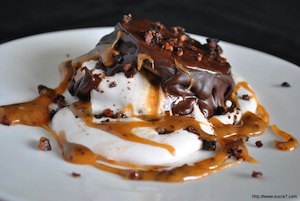 Innovative thinker, or just a child who “ain’t right”? History must judge the creator of the Bacon Moon Pie. Not for dieters, it’s two pieces of bacon shortbread joined together with maple bourbon marshmallow; in the midst of the marshmallow, you’ll find a dollop of bacon-fat-and-bacon-cracklin’ caramel. The whole confection is drenched in dark chocolate. As the confectioner notes, these are best warmed slightly in a microwave prior to eating. If you have foodie friends who think they’ve tasted it all, spring a Bacon Moon Pie on them…if you don’t eat them all first, that is. 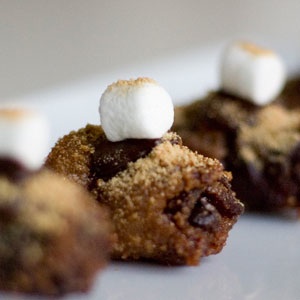 It isn’t every website that describes its offerings as being “for fine gifts and personal debauchery”. The Sticky Pig makes candied bacon in a surprisingly large number of flavors. While not all contain chocolate, the S’mores variation includes graham cracker crumbs, hazelnut butter, chocolate, and yes, even a mini marshmallow. In addition, a few Special Edition Monthly Flavors are chocolate-based.

And, for the vegetarians in your life…
---Chocomize, www.chocomize.com. This business offers customized chocolate bars, with a great number of ingredients you can add to dark, milk, or white chocolate to create that chocolate bar you’ve always dreamed about but could never find anywhere. One of the ingredient options is vegetarian bacon.