Chocolate: More Than Just the Numbers

Hi! My name is Stephanie Zonis, and welcome to the first edition of Make Mine Chocolate. Every month, you’ll find an article on a topic in chocolate, a (probably unrelated) recipe or two, and a personal recommendation on a great chocolate product. Let’s get started!

Chocolate: More Than Just the Numbers 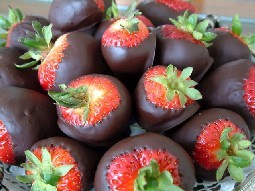 We’ve all seen chocolate bars with percentages on their labels. The percentages range from 30-something up to 70-something, perhaps even higher. Just what do those percentages mean, and how significant are they?
The percentages indicate how much of the chocolate in a bar comes from components of the cocoa bean (just so we’re all on the same page here, cocoa beans are more properly called cacao beans, but because most people still refer to them as cocoa beans, I’ll continue to do so, too). For example, if you see a bar with a 72% figure on its label, you’ll know that 72% of the bar (by weight) is made up of components of the cocoa bean, those components being cocoa solids and cocoa fat, the latter usually called cocoa butter in the US. Most of the rest of the bar will be sugar, perhaps with the addition of the emulsifier lecithin and vanilla or vanillin thrown in for flavoring.

In the United States, the FDA has determined that milk chocolate must contain a minimum of 10% cocoa bean components; sweet chocolate, a minimum of 15%; and semisweet or bittersweet, a minimum of 35%. By the way, there’s no “magic number” at which a semisweet chocolate becomes bittersweet. A chocolate bar labeled 60% might be considered semisweet by some and bittersweet by others. Labeling bars with these percentages is optional in this country, but it has become very common, partly because dark chocolate has become much more fashionable here and partly because there’s a perception that darker chocolate is healthy for you (more on that in a future edition). By contrast, for chocolate made in the European Union, there’s a minimum requirement of just 1% cocoa bean components, but the percentage must be stated on the label.

Does a higher percentage mean better chocolate? It does not, just as a higher price doesn’t always indicate a superior quality. In general, the higher the percentage of cocoa bean components in a bar, the darker and less sweet the chocolate will be. But that’s all. You cannot determine quality merely from a percentage figure on the label. That would be a pity if it didn’t mean that you must taste the bar to see how you like the chocolate!

Some people get excessively caught up in this numbers game. I’ve read of individuals who refuse even to try chocolate bars with percentages under a particular number on their labels, but I think they’re only fooling themselves. I adore a good bittersweet chocolate, but the bar with the highest percentage of cocoa bean components may not always taste the best to me. Chocolate is a notoriously persnickety food, and there are literally thousands of ways it can vary, from the micro-climates in which the beans are grown to the mix of beans in the chocolate to the length of roasting time for the cocoa beans. In cookbooks and on TV shows, some chefs require both a brand and a percentage of chocolate for a particular recipe. But unless the chef can assure you that he/she has tried the recipe with multiple other chocolates unsuccessfully, specifying the Brand X 75% bar for that fancy dessert may well come down to the chef’s taste preference or a sponsorship on the chocolate manufacturer’s part. Within types, you have to try the chocolate and make up your own mind (that is to say, while you can’t usually substitute a milk chocolate for a bittersweet, or vice versa, you ought to try to find the milk, bittersweet, etc. that you like best and that works best for you, not simply use any one chocolate because it was recommended by a celebrity chef).

In a similar vein, there’s at least one manufacturer who makes bars that are three percentage points apart. That is, this manufacturer produces milk chocolate bars of 33%, 36%, and 39% cocoa bean components; they also produce dark chocolate bars of the same minute difference in percentages. I’m sure there are some people who can distinguish (or think they can distinguish) between a 36% milk chocolate and a 39% milk chocolate, but I’m here to tell you that I’m not one of them. There’s nothing really wrong with producing chocolate in this fashion, but I believe it leads to a form of tunnel vision, where the percentages become more important than anything else.

There is (or should be) much more that goes into your opinion of a chocolate bar than a mere number on a label. Those numbers are broad-brush guidelines to indicate how dark a chocolate will be, but they disclose little other important information. I hope you’ll let your taste buds, rather than simple mathematics, be your guide to the wonderful variety of chocolates now available.

Tips: It’s summer and hotter than blazes, so let’s keep it simple. This is an old-fashioned milkshake, of a sort. It is very thick, so you'll need a powerful blender. If the ice cream gets "stuck" and isn't blending into the shake, pulse the blender off and on a few times to get things going. You'll need malted milk powder for this, which I found in my local supermarket. Malted milk powder is a dry, cream-colored powder, made from wheat flour and malted barley extracts, lecithin, salt, dry whole milk, and sodium bicarbonate. The malted milk powder I found is made by Carnation. Use the original, not the chocolate variety. A wonderfully rich dessert!

Soften ice cream by removing carton lid and liner (if any) and placing in microwave at 50% (medium) power just until somewhat softened (times will differ based on your microwave oven and whether you use ice cream, frozen yogurt, or sorbet; start with 10 seconds if using a full pint; you can always microwave it for a few seconds more if necessary). Working quickly, add softened ice cream to blender in chunks (there's no need to measure the ice cream--just use about three-fourths of a pint). Cover; blend on highest speed just until smooth. Serve immediately.

(c) Stephanie Zonis provides the above information to anyone, but retains copyright on all text. This means that you may not: distribute the text to others without the express written permission of Stephanie Zonis; "mirror" or include this information on your own server or documents without my permission; modify or re-use the text on this system. You MAY: print copies of the information for your own personal use; store the files on your own computer for your personal use only; reference hypertext documents on this server from your own documents.

Chocolate Find of the Month:

I have an uncle who’s a very intelligent man. His philosophy of food is simple: no bad calories. This means that if you’re going to eat something that isn’t necessary for your health, eat only the good stuff. Luckily for all of us, there’s a small ice cream company in Massachusetts, Bart’s Homemade, that produces some terrific flavors. And if you can’t get to their store in Amherst, they will ship their products to your very doorstep. Mail-order ice cream, you ask? In these days of mail-order wine and steak and cheesecake, I’m only surprised that more people don’t mail-order their ice cream, particularly when it’s this special.

Of course, Bart’s Homemade has the classics, like Vanilla and Chocolate, Coffee and Strawberry. But there’s also the Almond Joy, coconut ice cream with chocolate-covered almonds, coconut flakes, and chocolate chunks. Not your thing? Perhaps my favorite, then, the Chunky Chocolate Mousse with Raspberry, a chocolate ice cream with chocolate mousse powder, chocolate chunks, and a red raspberry ripple. For a change of pace, try the Ginger or the Peppermint Stick. Currently, the company accepts orders only via the internet. To try some Bart’s Homemade for yourself, a move I recommend highly, surf over to http://www.bartshomemade.com. (Don’t be alarmed by the statement that the site was last updated in 2001; that’s not entirely accurate and there’s a long story behind it. The company is very much still in business, but note that the Northampton store will be closed for a while.) I can’t claim that this ice cream is nutritionally complete or even close to that, but you won’t find a bad calorie in any of it!