Cocoa beans are the building blocks of one of the most popular foods going. I refer, of course, to chocolate. But many people know almost nothing about the source of one of their favorite foods, and that’s a shame. Join me as we find out more… 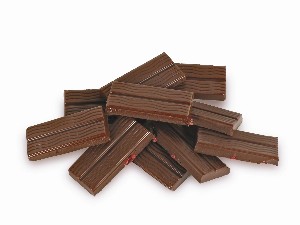 The cocoa, or, more properly, cacao tree (Theobroma cacao) is cultivated only within 20 degrees north or south of the equator. The largest producer of cocoa beans (again, although the proper term is “cacao bean”, I’ll use the more common term here) is the Ivory Coast; other prominent producers include Brazil, Malaysia, Indonesia, Ghana, and Nigeria. The trees are sensitive to, among other factors, sunlight, temperature, and rainfall, and they do not begin to bear until 5 or 6 years after they are planted. People now do most pollination of the blossoms, as they must be pollinated within a few hours from the time they open. Once pollinated, the tree forms fruits, called “pods”. These pods contain pulp along with bean-shaped seeds. After harvesting, the pods are split and the seeds and pulp are removed. It is only through the next step, fermentation, that the typical chocolate flavor in the seeds begins to develop, and it’s only after the fermentation process is complete that the seeds are referred to as cocoa beans. The beans are then dried, after which they may be stored or shipped to a manufacturer. They’re eventually cleaned, roasted, cracked, and ground before they become chocolate liquor (better known to many people as unsweetened chocolate; there’s no alcohol in chocolate liquor). Each step in this lengthy process must be undertaken with great care, as poor or sloppy handling can lead to an inferior chocolate. From there, cocoa butter may be extracted from the liquor to produce cocoa powder. Alternatively, sugar and perhaps other ingredients may be mixed in to form dark or milk chocolate. When you consider the incredible amount of labor, skill, and complexity required to manipulate cocoa beans to make any kind of chocolate, it’s a wonder to me that chocolate doesn’t sell for a much higher price. I also have to question how the many necessary steps in this process became known, but that’s a book for someone else to write!

Historically, there were two types of cocoa beans: the Criollo and the Forastero. The Forastero species is a heartier tree, less prone to disease and with a higher yield; it’s grown on many plantations in West Africa and Brazil. Forastero beans have thick-walled pods and a stronger aroma, along with a stronger, more bitter taste; they require more fermentation time than other beans, as well. While they make up between 80% and 95% of the world’s production, these are “bulk” beans, used for blending, milk chocolate, and most cocoa powder.

The Criollo bean, on the other hand, is cultivated in Central and South American regions. It makes up only 5% to 10% of the world harvest. The tree is more delicate and has a significantly lesser yield. Criollo beans are considered “fine flavor” beans; their subtle aroma and complex flavor are much in demand by manufacturers of high-quality chocolate.

As with everything else in life, however, there’s more to the story than this. The Criollo and Forastero trees have cross-pollinated over time, creating a number of hybrids that thrive in particular regions. The most commercially important of these is the Trinitario, which, as the name suggests, developed in Trinidad. It was a naturally occurring hybrid, the result of cross-pollination between Forastero trees and the few Criollo trees that survived a natural disaster in the early 18th century. The Trinitario combines the more robust constitution of the Forastero tree with some of the delicate flavor and aroma characteristics of the Criollo bean.

In the long run, the quality of chocolate produced depends upon the skill of the manufacturer in selecting, processing, and blending beans to achieve a chocolate with the traits desired by the consumer; many chocolatiers buy blends created to their own exacting specifications. From this chocolate, they create the confections we all enjoy. Next time you’re biting into a chocolate bar or gazing in admiration at a window display of pralines, pause for a moment to think about the cocoa bean we now take for granted, an item once so precious that some cultures used it as currency.

This is an adaptation of a recipe I used to make as a kid. A simple mixture of coconut, pecans, eggs, and sugar tops a shortbread crust; the surprise here is a layer of chocolate between the crust and the coconut-pecan topping.

These aren't difficult to make, but they take a little time, and they cut more neatly if allowed to stand at least 6 hours after baking (so the chocolate layer has a chance to firm up). The bars will keep at room temperature for a few days if stored airtight, but I think they tend to dry out if kept that way for longer than a day or two, so I freeze them for longer storage. You might like to sift a bit of confectioners' sugar over the tops of the bars just before serving, to dress them up.

Line a 13 by 9 by 2 inch pan with heavy-duty aluminum foil, shiny side up, pressing out as many creases as possible. If there is any overhang, fold the foil back against the outer edge of the pan. Adjust rack to center of oven. Preheat oven to 350 degrees F.

For Topping: In medium bowl, combine eggs, granulated sugar, and half of brown sugar (reserve remainder). With large spoon, stir to mix, pressing out any brown sugar lumps.

In small bowl, combine reserved brown sugar, flour, baking powder, and salt. With small spoon, blend thoroughly, pressing out as many lumps as possible with back of spoon. Add to egg mixture. With large spoon, beat well to combine, about one minute, again pressing out any lumps with back of spoon. Beat in orange rind and vanilla. Stir in coconut and pecans. Cover loosely; set aside at room temperature until needed.

For Crust: In clean medium bowl, combine softened butter and confectioners' sugar. Mix well with large spoon. Stir in flour until incorporated. By small spoonfuls, place this mixture all over the bottom of the pan. Keeping your fingers lightly floured as necessary, press out crust mixture into as even a layer as possible on pan bottom (I use floured fingertips and knuckles; I've tried spreading the crust mixture with a spoon or spatula, but that doesn't work for me).

Bake crust in preheated oven for 10 to 12 minutes, turning back-to-front once about halfway through baking time. The edges of the crust should be a golden brown.

Remove crust from oven and place on rack. Immediately sprinkle on chopped chocolate or chips as evenly as possible, then cover pan with larger cookie sheet and allow to stand for 5 minutes. After 5 minutes, remove cookie sheet. With back of spoon, gently spread melted chocolate evenly on crust, stopping just short of the edges (a few small pieces of unmelted chocolate are OK). Do not work over any one area of the crust too much, or it will pull off onto the spoon.

Remove cover from Topping. Stir Topping well (coconut and pecans will probably have floated to the top of this mixture while it stands). By large spoonfuls, place Topping all over melted chocolate; spread as evenly as possible, right to edges of pan. Return pan to oven.

Bake 22 to 25 minutes. When done, the top should be a light golden brown (the edges will be a bit darker). When the pan is shaken gently, the center will no longer quiver. Do not overbake, or the bars will lose their chewiness. Cool completely on rack before covering airtight. Allow to stand at least 6 hours before cutting. If desired, lightly sift confectioners' sugar over bar tops just before serving.

© Stephanie Zonis provides the above information to anyone, but retains copyright on all text. This means that you may not: distribute the text to others without the express written permission of Stephanie Zonis; "mirror" or include this information on your own server or documents without my permission; modify or re-use the text on this system. You MAY: print copies of the information for your own personal use; store the files on your own computer for your personal use only; reference hypertext documents on this server from your own documents.

Chocolate Find of the Month:

For years, I’ve maintained that chocolate is like religion; you’re either born into it or convinced into it. Brant Secunda chose the second path---or perhaps it would be more accurate to say that the second path chose him. Telling his story would take too long here (although it’s a wonderful tale), but this month’s find, Shaman Chocolates, is his brainchild. A Shaman who completed a twelve year apprenticeship with the Huichol Indians, it was one of Brant’s visionary dreams that led to the creation of this small company as a way to help the Huichols, a tribe of about fifteen thousand living in the Sierra Madres in central western Mexico. The Huichols are said to be the last people to have maintained their pre-Columbian traditions, which is almost miraculous when you consider how many such societies have been assimilated into the dominant cultures that surround them.

Shaman Chocolates are both organic and fair trade; the dark chocolate varieties are also vegan. Right now, they’re available in five varieties in bars only: milk chocolate; milk chocolate with hazelnuts; dark chocolate; dark chocolate with coconut; and dark chocolate with ruby raspberries. All too often, I have a problem with organic chocolate, as much of it tends to be excessively astringent or acrid. But that isn’t the case here; these are simply fine-quality bars (my favorites are the plain milk and dark varieties). Perhaps the most astonishing thing about this business is the altruism involved. No one in this company’s management is paid; all profits go to help the Huichols. Your purchase might go, for example, toward building a local high school so children won’t have to leave their homes to get more education.

The Huichols, obviously a people of uncommon sense, have long considered chocolate sacred, using it as an integral part of their ceremonies. By consuming Shaman Chocolates, you have an opportunity to help them continue their age-old traditions even while you satisfy your chocolate cravings. For more information, surf over to www.shamanchocolates.com.