Several vegan friends had been dropping an increasing number of hints that I needed to do an edition on vegan desserts containing chocolate. When I suggested that they simply stick to dark chocolate bars, they were not amused; they know something about the broad spectrum of specialty foods I try. I pointed out that I just finished an article on non-dairy chocolate milks. I pleaded that I miss my beloved dairy products in cookies, snack bars, and the like. But I received no sympathy; they were adamant. And perhaps they’re right. I know a good number of people who are vegans now, and a large number of vegan products of all kinds have become available to consumers in the past few years.

In general, vegans seem to be somewhat more careful about their diets than the general public. Partly as a result of this, a significant percentage of vegan foods, even desserts, are advertised as gluten-free, wheat-free, non-dairy, lactose-free, and the like. Their manufacturers are seldom shy about these attributes, posting them prominently on labels. The non-dairy and lactose-free claims seem rather peculiar, given that all vegan foods should be both non-dairy and lactose-free, but nonetheless I’ve seen the claims on more than one product. Given that vegans are careful about what they ingest, it makes sense that they might be more attuned to those foods to which their systems are sensitive. Manufacturers recognize this, and they’re not slow to exploit it.

As with everything else, the degree to which one observes veganism will be a factor in one’s food choices. For instance, I ran across a frozen dessert that noted it “probably” contained traces of milk products, as it was manufactured in a facility where milk products were used. So is it vegan, or isn’t it? Again, that’s up to the individual (that product is not mentioned in this article, as I didn’t think it tasted very good). The same would apply to products that are sweetened with honey or cane sugar; a stricter vegan might not want to consume such foods, but again, it must be up to the individual.

When vegan products first began to come out in any quantity, I simply assumed that most of them would be soy-based. That might have been true at one point, but now some manufacturers are steering away from soy, or have separate lines of soy-free products. I can’t speak to the veracity of the claim, but I’ve read once or twice that soy intolerances are either becoming increasingly common or are being more accurately and readily diagnosed. It must still be very difficult to be a vegan and unable to consume soy, but at least it should be marginally easier than it once was.

Dark chocolate bars, chocolate-covered caramelized cacao nibs, and other products of that ilk are not discussed here, because they’re commonly available and many variations on those themes are offered by numerous brands. Among other desserts, aside from being labeled vegan and including chocolate, there was only one criterion for products to be listed here: I had to like the way they taste. I have had serious trouble with vegan chocolate desserts in the past, especially baked goods. Among those that are soy-based, I tend to find the soy flavor unpleasant and overwhelming. Agave sweetening usually doesn’t do it for me, either; it’s never quite sweet enough, and there’s sometimes an aftertaste I don’t enjoy. But clearly advances have been made in vegan desserts containing chocolate over time, as I was able to find a handful I not only enjoyed but would buy again. These are listed below, in no particular order. 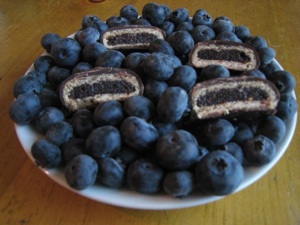 Way back in 1990, Roman Starno dipped a store-bought fig cookie into chocolate. It was a big hit with his family. Many years of experimentation and several incarnations later, this treat has evolved into a “natural vegan cookie/candy bar” enrobed in a semisweet chocolate (this chocolate contains soy lecithin). Unexpectedly, I enjoyed this. I was able to try only the Blueberry Bar, but it was chewy, not too sweet, and downright satisfying. While the Honey-Peach Apricot Fruit Bar is their best seller, it is not vegan. However, both the Blueberry Fruit Bar and the Raspberry Fruit Bar are vegan. All three varieties are dipped in chocolate. Roman Bars are available in some stores in the Western US, but you can also order online (I’m not sure what their warm weather shipping practices are, but with a chocolate covering, it’s worth asking about).

---Good Karma Foods Organic Rice Divine, www.goodkarmafoods.com. This is an “ice cream” with a base of brown rice. Now, I love brown rice, but in a frozen dessert? Hmmm, probably not. No worries, however; there’s no “grain” flavor at all. Flavors run the gamut from Banana Fudge to Mint Chocolate Swirl. My choice is the Mudd Pie, flavored with an organic Columbian coffee. But there’s more; the coffee base is complemented by almond pieces, chunks of chocolate cookie, and fudge ribbons. What’s not to like? This is an enjoyable frozen dessert that just happens to be vegan and organic. No online ordering. 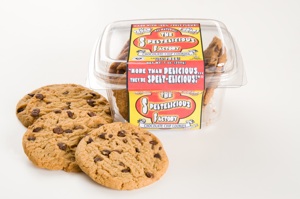 The Speltelicious Factory makes vegan cookies, but not just any vegan cookies. These are made with spelt flour. If you don’t know about spelt, it’s a grain in the wheat family, but it has less gluten than typical wheat. As a result, many people with gluten intolerances can consume spelt and spelt products. As of this writing, The Speltelicious Factory makes four kinds of cookies: Chocolate Chip, Oatmeal Raisin, Raspberry Spritz, and Naked Raspberry Spritz. A word of explanation is required for the latter two. The Raspberry Spritz Cookies are a multilayered affair: two not-too-sweet cookies sandwiched with raspberry jam and drizzled with chocolate. These are my favorites out of the lot. However, for the summer, the company has omitted the chocolate drizzle, and some consumers apparently prefer the cookies that way. I expect they’ll continue to offer both versions of this cookie. I have to tell you that I wouldn’t be able to determine that these cookies were vegan if I didn’t know it, which is really saying something for me. Online ordering at www.veganessentials.com. 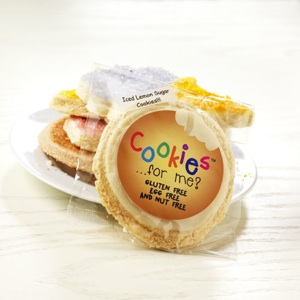 Necessity is the mother of invention, they say, and so it proved here. This company was begun by a Mom when one of her young sons proved severely allergic to a whole host of foods. As a result, these cookies are not only vegan but gluten-free and nut-free. You’ll find Brownies and their miniature cousins (Brownie Bites), Snickerdoodles, Ginger Spice Cookies, and more. There are even cookie “cakes” that can be custom decorated. And I mustn’t forget to mention my top pick, the Chocolate Dipped Sugar Cookie. Oddly, this isn’t dipped in chocolate at all. It’s a large, thick, round, shortbread-like cookie, topped with a layer of chocolate icing. Online ordering is available. 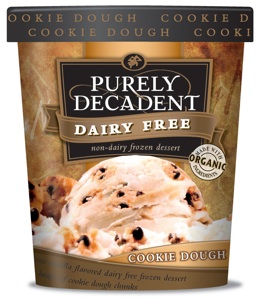 You’ve got to believe that if there’s one place where I’m going to miss my dairy products, it’ll be in a frozen dessert. I grew up eating ice cream (sorbet simply wasn’t around when I was a kid), and a lot of non-dairy frozen desserts I’ve tried left me, well, cold. But if you like the taste of coconut, you ought to try these products. They’re made with both organic coconut milk and organic agave syrup, and they’re creamy and rich-tasting. There are currently eight flavors, ranging from Mint Chip to Mocha Almond Fudge, but if you’re like me, you’ll head straight for the Cookie Dough. One bonus of these frozen desserts is that they contain a good amount of fiber per serving (between 5 and 6 grams per half cup). Because they are made with agave syrup, they are also lower in sugar, calories, and fat than most high-end ice creams. There are also coconut-milk-based frozen dessert sandwiches (in Banana Split, Coconut, and Vanilla) and frozen dessert bars (in Vanilla and Coconut Almond). No online ordering.

---ZenSoy, www.zensoy.com. While ZenSoy makes soy milks in various flavors (including chocolate), for the purposes of this article I’m going to tell you about their pudding. This is ready-to-eat refrigerated pudding, but without all of the artificial flavors and preservatives normally associated with that dessert. ZenSoy’s puddings are certified organic and vegan, and the company will not use genetically-modified soybeans (hurray!). My preference here is for the Chocolate Pudding; there’s a Chocolate/Vanilla Swirl, as well, but I can taste the soy in the vanilla half. No online ordering.

I expect that anyone who’s ever wanted to make a chocolate cake without dairy products knows about this recipe. I consider it vegan, but stricter practitioners of veganism will doubtless take exception to the use of granulated sugar. I have not tried using a granulated sugar substitute (such as a less-refined sugar), but it might work well.

This cake is traditionally mixed in the baking pan. I use a bowl, however, as I have trouble getting all the ingredients well-blended if I mix it in the baking pan---and I can still make the batter in the time it takes the oven to preheat. You'll need regular, nonalkalized (non-Dutch process), unsweetened cocoa powder for this recipe. The cake is very moist, very chocolatey, and not especially sweet, and it will keep well at room temperature for a day or two, if tightly covered.

Serve this warm (not hot) with ice cream, or cool it completely and dress it up by sifting on a little confectioners' sugar just before serving.

Grease and flour a 7 by 11 by 2 inch baking pan, knocking out any excess flour. Adjust rack to center position of oven. Preheat oven to 350 degrees F.

Into large bowl, sift together flour, sugar, cocoa powder, baking soda, and salt. All at once, add all remaining ingredients. With hand-held electric mixer on low speed (or with a sturdy whisk), beat until ingredients are well-combined. Scrape bowl and beater(s) with rubber spatula (make sure bottom of bowl is scraped thoroughly). Beat batter again at low speed until well- mixed. Batter will be rather thin.

Pour into prepared pan. Spread level, then push slightly higher in corners and along edges of pan.

Bake in preheated oven for 23 to 30 minutes, turning back-to-front about halfway through baking pan. Cake is done when toothpick inserted in center emerges with only a few moist crumbs clinging to it. Do not overbake. Remove to cooling rack. Cool in pan. Serve warm (not hot) or at room temperature. Cool completely before covering tightly.