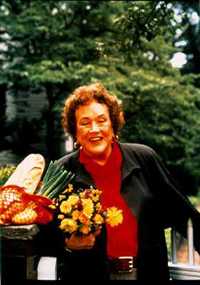 France awarded her the Legion of Honor. Harvard awarded her an honorary doctorate. But her own country has been late in formally honoring Julia Child.

Her father (John McWilliams) was a member of the group of businessmen who financed the first political campaign of Richard Nixon in California. She apparently never forgave him for that. Her fans assumed the last Democratic administration would honor her, but it took the Republicans to remind us that Julia Child's contribution transcends any political affiliation.

Julia Child taught her compatriots the techniques of mastering the art of French cooking on numerous television series, beginning in 1962 with her beloved "The French Chef." Would she now have to call her program "The Freedom Chef"?

For forty years, men and women have tried her ambitious recipes, sat down at the family dinner table to enjoy new tastes, and--most importantly--changed their attitudes toward fresh produce and the importance of good cooking and communal dining. Our supermarket shelves no long contain just one lettuce (iceberg), one mushroom (the white button), and one cheese (Velveeta, or if you were sophisticated, cheddar). 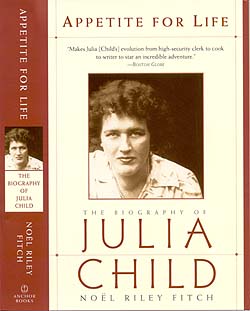 During the years that she offered her cooking shows to the entire country, she was frequently invited to the White House, first by Richard Nixon. Some of us waited during the last decade, as she achieved virtual cult status, for the President to honor her with the Congressional Medal of Honor for her ninetieth birthday in 2002.

The time has now come for this over-due official recognition, and it arrives amid a period of Franco-American tension. When Americans are canceling their trips to France and dumping their French wines, Julia Child is honored by her government. It was she who brought the two countries together in the kitchen and at the table.

"C'est un grand honneur, et j'adore la France!" she proclaimed in accepting the French Legion of Honor in 1991. No Freedom Fries then or now for her. She adores her own country as well, having served during World War II for the OSS intelligence agency (the Office of Strategic Services was the predecessor of today's embattled CIA). Perhaps another coincidental historical irony.

Americans have always loved Julia, of course, and no spat with France would change their almost biblical devotion to her ambitious recipes; nor could anyone deny the influence of French culinary techniques on our professional chefs. We trusted her because she taught us with a Yankee practicality, in a voice everyone loves to imitate, and with a California casualness (she was born and reared in Pasadena).

When Harvard a decade ago acknowledged her great cultural legacy, then President Neil Rudenstine exclaimed that she "filled the air with common sense and uncommon scent,"--much to the students' thunderous applause (they had stood and turned their backs when General Colin Powell received his honorary degree that same day).

Though Secretary of State Powell probably had nothing to do with her new Medal of Freedom, he would no doubt agree with the final words of Rudenstine's praise of his fellow laureate: "Long may her soufflés rise. Bon appétit."

Noel Riley Fitch is the author of Appetite for Life: The Biography of Julia Child and Sylvia Beach and the Lost Generation: A History of Literary Paris in the Twenties and Thirties (as well as other books).