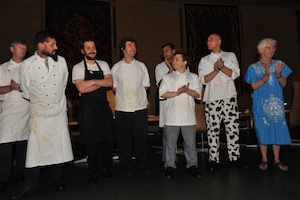 Celebration!  That was the mood—and the theme—of this year's Oxford Symposium on Food & Cookery (July 8-10, 2011). Held annually for 30 years at Oxford University in England, the weekend conference attracts a wide range of participants from around the globe, including cookbook authors and culinary journalists, editors and publishers, chefs and cooking school teachers, scientists, vintners, restaurateurs, anthropologists, sociologists, historians, and non-professionals with a serious interest in food.

Over the past three decades, the roster has included such well known figures in the culinary world as Elizabeth David, Julia Child, Jane Grigson, Claudia Roden, Anne Willan, Richard Olney, Raymond Blanc, Paul Levy, Charles Perry, Rosemary Barron, Raymond Sokolov, Darra Goldstein, Harold McGee, Madhur Jaffrey, Jill Norman, Fuschia Dunlop, William Woys Weaver, and Colman Andrews, as well as the symposium's original founders, social historian Theodore Zeldin and Alan Davidson, diplomat, culinary scholar, and author of The Oxford Companion to Food. Where else could you mingle, chat, drink, and dine with such a stellar line-up of talented people who delight in sharing their knowledge and experience with the 200 or so other attendees?

The Oxford Symposium prides itself on being a different kettle of fish from traditional conferences—intimate, unpretentious, eccentric, quirky, sometimes whimsical or even a bit crazy (people wearing edible hats, a musical performance on a carrot carved into a flute). It's certainly educational and thought-provoking—and always a lot of fun. 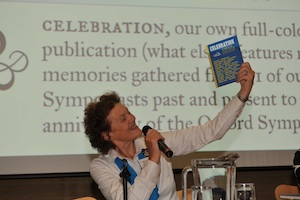 The Symposium is open to the first 220 people who sign up. You don't have to be a member of anything to attend. You don't have to be a Big Name to present a paper there, either. Anyone can submit a proposal for a paper, on any aspect of that year's symposium theme. Past themes have included "The Cooking Pot," "Fasting and Feasting," "Eggs," "Food in the Arts," "Wild Food," "Milk," "Food and Travel." This year the symposium panel selected 45 papers on "Celebration" topics ranging from a historical Roman feast to celebrating with sweets in Ottoman Turkey, from banquet tableware to underground restaurants, from Icelandic feasting to Aussie barbecues.

Richard Wrangham, a noted biological anthropologist at Harvard, opened the conference with a fascinating plenary presentation on "Why We Cook and Why It Matters." Jane Kramer, author and staff writer for The New Yorker magazine, regaled the group with her observations on different aspects of celebrating around the world. Oxford historian Oswyn Murray's dry wit punctuated his presentation, "From the Greek Symposium to the Roman Orgy." And at the beginning and end of the conference, culinary historian Barbara Wheaton and her son, artist Joe Wheaton, entertained the audience with an audio-visual celebratory rave that enveloped the eyeballs and eardrums of everyone there. 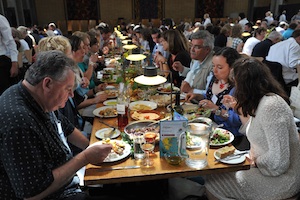 Of course eating and drinking are especially important at a gathering like this. The symposium kicked off on Friday night with plenty of champagne, followed by a tequila tasting after a 3-course dinner prepared by scholar-chef Shaun Hill of The Walnut Tree restaurant in Wales. Saturday's sumptuous lunch celebrated the 150th anniversary of the unification of Italy, with plenty of fine Italian foods and wines. Sunday's midday meal was a Greek celebratory feast arranged by cookbook author Aglaia Kremezi, featuring a large selection of vegetarian mezzes for the first day of Lent. 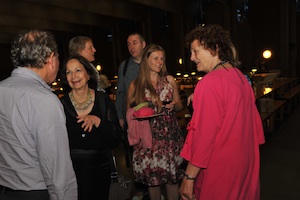 But the culinary highlight of the weekend was the Mexican "Day of the Dead" dinner on Saturday night, organized by historian Bruce Kraig, filmmaker Jan Thompson, and food writers Caroline Conran and Elisabeth Luard. The colorful meal was prepared with the help two Mexican restaurants, some ladies from the Mexican Embassy in London, and chef Tim Kelsey and his staff at St. Catherine's, the Oxford college where the conference is held. Diners chowed down on corn torilla chips and three kinds of salsa, along with guacamole, tamales, turkey mole enchiladas, pork pibil, cactus pads in tomatillo sauce, green beans with red chile sauce, and hibiscus-margarita sorbet. Plates were decorated with handcrafted sugar skulls, and dessert included anise breads shaped like skulls and crossbones. As a bonus, the beautifully designed menus for each meal are destined to become collectors' items.

Is your appetite whetted? Would you like to learn more about food history, culinary cultures beyond your own, vegetables you've never seen, meats you've never tasted, meals at the top of the Earth and the bottom of the sea? Would you like to pick the brains (figuratively only) of some of the world's finest food experts? Would you like to dine with cookbook authors and drink with winemakers?  Then consider attending next year's Oxford Symposium (July 6-8, 2012), when the topic will be "Stuffed and Wrapped Foods." I guarantee that afterward you'll be stuffed (with food) and wrapped (in knowledge).

Sharon Hudgins (swhudgins@earthlink.net) is an award-winning cookbook author and food columnist who has presented seven papers at the Oxford Symposium on Food & Cookery, including this year's paper on "Buttering Up the Sun: Russian Maslenitsa—From Pagan Practice to Contemporary Celebration."