Never before have I had all the chocolate I could eat -- now I have! I spent an intense week of researching, tasting, talking about, smelling, eating and feeling some of the best chocolate in the world. And I have talked to and interviewed some of the top chocolatiers in the business. What fun!

It all began with an idea to make a television pilot, devoting the first eleven minutes of a thirty minute segment to the subject of chocolate. My director said to pick a topic about which I was passionate -- there was no question in my mind as to that answer. 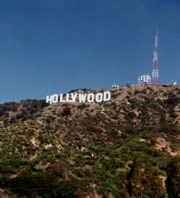 I arrived in Los Angeles, the US entertainment mecca, and was quickly whisked off to a hair/wardrobe/make-up session. I would have one person with me all week who would "do" my hair, help with my clothes and apply my make-up. Already this was sounding like a dream come true.

The wardrobe session took 3-4 hours. I tried on everything that was in the 3 suitcases I had brought to L.A. I would change clothes up to 4 times a day depending on the number of interviews and store visits.

My fingernail polish was deemed the wrong color red for the camera so off to a store we went. My clothes proved to be adequate, but I see some shopping in my future. I learned that red colors tend to "bleed," that the 8 pair of shoes I brought were useless as my feet would never be seen, print fabrics are a no-no and horizontal lines are not flattering. A list was compiled for me so that I could keep up with the multiple daily changes and optional outfits were chosen -- just in case.

The first day of shooting took place in a kitchen in Los Angeles. A bakery owner was to demonstrate how to dip large, stemmed strawberries in first white, then dark chocolate to dress the strawberry in a scrumptious tuxedo. Chocolate studs and bow ties were then added. We worked with four eleven pound blocks of Belgium Callebaut chocolate, one of the finest chocolates in the world. The kitchen scene took 6 hours to shoot. This was the first time for me to meet the rest of the crew -- two cameramen, one videographer and a P.A., or producer's assistant. All total, we were a crew of 9 including the director and producer. And each person was very busy.

What I quickly discovered about filming is there is a lot of "hurry up and wait" as everybody's job takes time. Time to unload the equipment from the truck, time to set up the lights, audio equipment and props. Then the "talent" has to be ready (that's me) with hair, make-up and wardrobe perfect, not to mention the questions I had prepared in advance if I was conducting an interview. But none of this can happen unless the producer has made many advance phone calls to schedule the different events, as well as hotel and plane reservations. And the director spearheads the whole project with his creativity and insight as to what will be the final content of the video. But, of course, a large part of the credit goes to the executive producer, whose creativity and foresight first got the project "on the drawing boards."

After the kitchen scene we went to Allen Wertz Candies on Los Feliz Blvd. in L.A. We taped shots of the exterior of the building, the inside counters and the "oops" room, a room where candy that has not come out perfect is sold at reduced prices. There are some real bargains there! Wertz coconut cream was my favorite. After twelve hours, day one ended around 9 p.m. 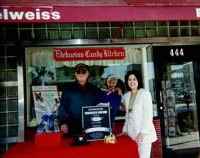 Day two began by visiting a Beverly Hills chocolate shop named Edelweiss on N. Canon Road. I was to interview comedian Marty Ingels, who had recently purchased Edelweiss for his wife, actress Shirley Jones. I had been told that I would only need ask Marty one lead in question and he would take it from there. How right they were! Marty was a show unto himself -- an interviewer's dream. He even brought a product I'd never seen -- chocolate perfume. What will they think of next? And partner June Miller could not have been more friendly, knowledgeable and generous. We were encouraged to taste at the store and take what we wanted with us. The dark chocolate turtles proved to be my favorite.

Our next stop was See's Candy, a Los Angeles tradition dating back to 1921 when owner Charles A. See graced his boxes with a portrait of his Mother, Mary See. See's currently has 200 plus retail outlets in 15 states. Director of Customer Relations David C. Harvey joined us from headquarters to answer a few questions. I was taped walking through the line buying some of my favorite See's delicacies, which are scotchmallow, crisps and dark Bordeaux.

Back to Beverly Hills and the home of Teuscher Chocolates. There are only 7 Teuscher's in the U.S. all receiving weekly shipments from Zurich, Switzerland. Not only is the chocolate of very high quality, but their packaging is colorful and whimsical. Owner Aviva Covitz was most generous with her time. I soon discovered Teuscher's champagne truffles cannot be beat. Adjacent to the shop is a coffee bar where all the chocolate drinks use Teuscher's product. The mocha cappuccino is a winner.

Day three took us to Godiva Chocolatier at the Beverly Center. Their shiny gold boxes and upscale displays are reminiscent of European chocolate shops I have visited. I learned that Godiva US is owned by the Campbell Soup Company and that most of the candy is made in Pennsylvania with a very small percent coming from Belgium. But nevermind, taste I did! The new creme brulee dessert chocolates are to die for and the lion of Belgium and caramel nut bouchee remain my favorites.

The crew next took over a hotel room where we filmed a segment in which I order chocolate by phone. We strewn the room with empty candy wrappers, empty candy boxes and mail order catalogues. For once, no calories here.

A visit to Chocolates, Etc. on N. Bedford Drive in Beverly Hills proved to enlighten us about an interesting mother/daughter team. They make candy, sell candy and have some fun stories to tell. Mom insisted I taste their made-on-premises dark turtles. I also sampled a house favorite, oreo cookies dipped in chocolate. All were quite tasty!

Day four was dedicated to traveling from L.A. to San Francisco. Part of the crew drove so as to transport the delicate lighting and audio equipment. The rest of us flew. A day of reprieve from chocolate, which I welcomed. I never thought I'd say that. 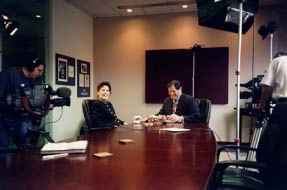 Back to work on day five. The fun began by interviewing Jack Anton, President and CEO of Ghirardelli Chocolate Company. Domingo Ghirardelli began selling chocolate to the gold rush miners in 1852. I sat down to a cup of Ghirardelli hot chocolate and immediately noticed that Jack was wearing a Nicole Miller Ghirardelli-commissioned necktie. Is the whole world into chocolate? I tasted their pillow pockets during the taping and was sent home with a few more samples. A new product I couldn't help but bring back to the office is a computer mouse pad with Ghirardelli products on it and a bite taken out of one corner!

Guittard Chocolate Company afforded a factory tour where I donned a hair net before I could enter. I slit open a burlap bag full of coffee beans, tasted the bitter nibs as they came off the conveyor belt and help break a 10 pound block of chocolate. But it was the truck filled with 50,000 pounds of liquid chocolate that excited me. While it looks much like a gasoline truck, just to think there was "liquid gold" in that truck was a delight. I now understand the enormity of Gary Guittard's position, fourth generation of a family owned business started by his great-grandfather in 1868. 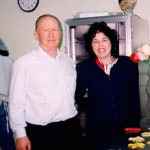 On to Joseph Schmidt Confections, home to 32 different flavors of truffles, beautiful packaging and a chocolatier who has fun with his business. Joseph is an artist who sculpts chocolate into many forms, from seasonal goodies to special order items such as the Golden Gate Bridge. More than 100 employeesproduce over 50,000 truffles a day using a million pounds of Belgium chocolatea year. Schmidt chocolates are sold in over 2,000 retail and food serviceaccounts.

Our final day, day six, began at Ghirardelli Square near Fisherman's Wharf inSan Francisco. Eating a chocolate fudge sundae at 10:00 a.m. was my charge. Conquer it I must andconquer it I did!

On to the Joseph Schmidt retail store South of Market Street in San Francisco. The store was packed to thegills with colorful packaging, egg-shaped truffles, slick truffles and seasonal gifts of chocolate.

Interviewing Gary Guittard and his teenage daughter Amy ended our day. On a picnic table in front of theBurlingame factory I learned the family history--and what the future holds for Guittard.

As I boarded my airplane having finished nine days work, I was laden with chocolate. For the first time ever,I wasn't even interested in a single taste!

If you can't get enough of that Southern California sunshine, read Sally's Beverly Hills article. Or, if Northern California ismore your style, check our Ports o' Call: San Francisco section.