Chocolate Good For You, Doctors Say 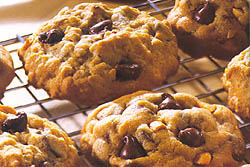 GLASGOW, Scotland, Sept. 3 — A bite of good news from a candy maker to chocoholics: The treat once uncovered by Aztecs and now gobbled by millions not only tastes delicious but is healthy for you, according to new research.

Chocolate contains compounds called flavonoids that can help maintain a healthy heart and good circulation and reduce blood clotting — which can cause heart attacks and stroke. “More and more, we are finding evidence that consumption of chocolate that is rich in flavonoids can have positive cardiovascular effects,” Carl Keen, a nutritionist at the University of California, Davis, said at a science conference. Keen’s research was funded by and conducted in conjunction with confectionery maker Mars Inc. “We not only have observed an increase in antioxidant capacity after chocolate consumption, but also modulation of certain compounds which affect blood vessels,” he said. Antioxidants such as vitamin C reduce the damage of cancer-causing charged particles in the body. Platelet activation is thought to be an important risk factor in blood clotting. Keen and his colleagues measured the impact of chocolate on platelets in the blood and presented their findings to the British Association for the Advancement of Science conference in Glasgow. The researchers collected blood samples from volunteers who ate 25 grams, or slightly less than an ounce, of chocolate with a high flavonoid content and other volunteers who ate bread. They took blood samples from both groups two and six hours after they ate the chocolate and bread to measure their platelet activation.


Volunteers who ate the chocolate had lower levels of platelet activity, while the scientists found no change in the group that ate the bread. Keen said the results of the study supported earlier research that showed that cocoa acts like low-dose aspirin, which helps to reduce blood clotting. “These results lead us to believe that chocolate may contribute to a healthy, well-balanced diet,” Keen added.

CHOCOLATE OR VEGGIES?
The British Heart Foundation pointed out chocolate contains flavonoids but is also has high levels of saturated fats and sugar. “Fruits and vegetables contain much higher levels of flavonoids, plus many other beneficial nutrients without the fat content,” the foundation said. “So the message is, enjoy a little chocolate in moderation, but ensure you eat five portions of fruit and vegetables daily to get all the flavonoids you need without the added fat,” it added. And Dr. Harold Schmitz said there are variations in the levels of flavonoids in chocolate and cocoa products depending on the production process, in which many flavonoids are destroyed. “All chocolates are not created equal in regards to flavonoid content,” said Schmitz, a scientist with Mars Inc. As many as 300 scientists are presenting research on subjects ranging from genetics and microbiology to global warming and organic farming during the five-day conference.