how to grill lobster 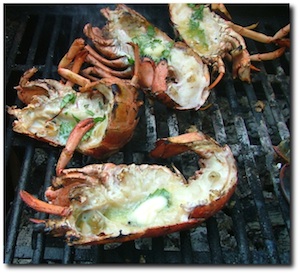 Lobster. The very word alone causes a Pavlovian response among seafood lovers. With its delicate texture and luxurious richness, it’s hard not to drool when imagining eating it. Whether dripping with butter or standing on its own, lobster is truly the gem of the sea. Boil it, broil it, put it in a stew - whatever - you know it will be delicious.

If you're looking for a new way to cook this tasty crustacean, consider putting it on a grill. Grilling lobster not only provides an enjoyable cooking experience, but it also brings new dimensions of flavors to the seafood.

Not for the faint of heart, cooking a live lobster is quite a task. Before grilling, parboil the leggy beast in about two gallons of boiling water. The gentlest approach to helping the lobster deal with its demise is to place it in a freezer for a few minutes before cooking it. Freezing the crustacean sedates it. However, if you don't really mind the idea of placing a live lobster inside the pot, go for it - just remember to put the lid on the pot immediately. After about five to seven minutes, remove the lobster from the water and turn the lobster face down on a cutting board. With a sharp knife, slice the lobster in half lengthwise from its tail to the top of its head. 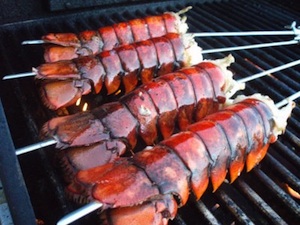 To avoid all the murdering and most of the slicing, you can purchase frozen lobster tails so that the hard work is already done for you. If the lobster is not cut in half lengthwise, you will have to bring yourself to do so. Seafood purists will insist that the lobster is not as fresh when it is frozen. If it eases your conscience to purchase frozen lobster, the taste difference will be worth it.


How to Grill Lobster:

Grilled lobster makes for an elegant, gourmet dinner, especially when served with grilled vegetables made in one of the best electric barbecue grills for cooking scrumptious lobster and other food items. Grilled lobster is also delicious in lobster salad or covered in Hollandaise sauce with two perfectly poached eggs for luxurious eggs Benedict.