There are so many things to consider when it comes to getting good sleep, from sticking to a regular bedtime and wakeup time to creating a relaxing sleep environment with a comfortable mattress. Another major factor in successful sleep? Food intake and meal times.

This piece will cover the ways in which food can promote or interfere with sleep, from carbs to caffeine. It will also outline the relationship between sleep and weight loss and possible ways to enhance sleep through diet. Finally, the piece will offer further sources for reading more about this topic. 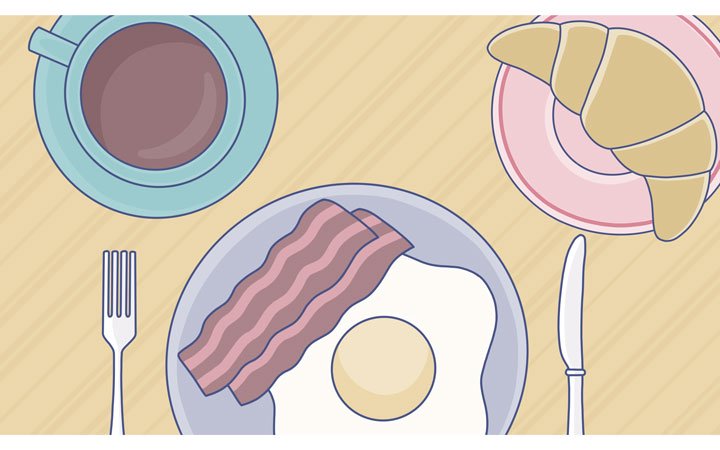 Balanced nutrition is incredibly important, affecting everything from muscle growth to brain health. However, there’s still much to learn when it comes to the exact relationship between nutrition and sleep. Research suggests that a number of foods help shorten sleep onset time (that’s the amount of time it takes to fall asleep), but for the most part, hard evidence is limited.

Some people swear that a large serving of Thanksgiving turkey will induce sleepiness due to the presence of tryptophan. Tryptophan is an essential amino acid that the body uses to produce niacin, melatonin, and serotonin, Medline Plus says. And melatonin is known to play a role in sleep, helping maintain the circadian rhythm and cue the body’s sleep/wake signals. 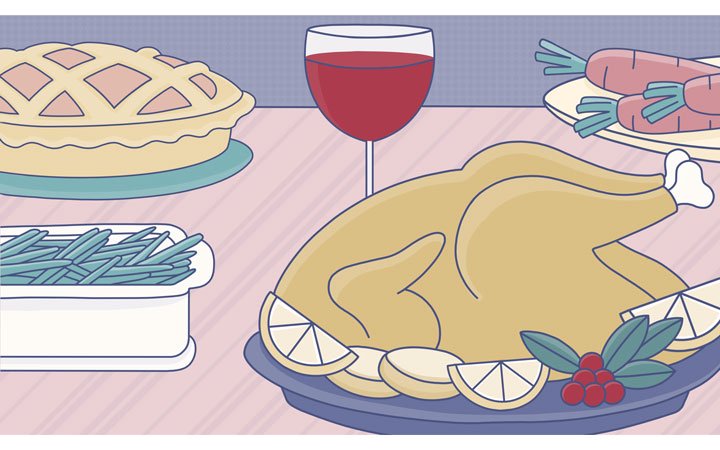 However, experts say that turkey is no more sleep-inducing than a number of other foods, and that post-Thanksgiving sleepiness can also be attributed to other factors.

RELATED: The Complete Guide To Your Sleep Cycle

“Basically, any big meal containing tryptophan and lots of carbohydrates can trigger sleepiness — not just turkey,” a LiveScience article on the phenomenon explains. “And on Thanksgiving, many other factors contribute to feelings of tiredness, such as drinking alcohol. The holidays are also a time when people often take a break from their hard work.

Is it smart to eat carbs before bed?

Some research suggests that a high-carb meal can shorten sleep onset times. And where the carb foods fall on the glycemic index matters, too. The Academy of Nutrition and Dietetics explains that the glycemic index (GI) “is a measure of how quickly a food causes our blood sugar levels to rise.” GI is measured on a scale of 0 to 100, and “foods with a high glycemic index, or GI, are quickly digested and absorbed, causing a rapid rise in blood sugar… Meanwhile, foods with a low GI are digested and absorbed at a slower rate, and subsequently, cause a slower rise in blood sugar levels.” 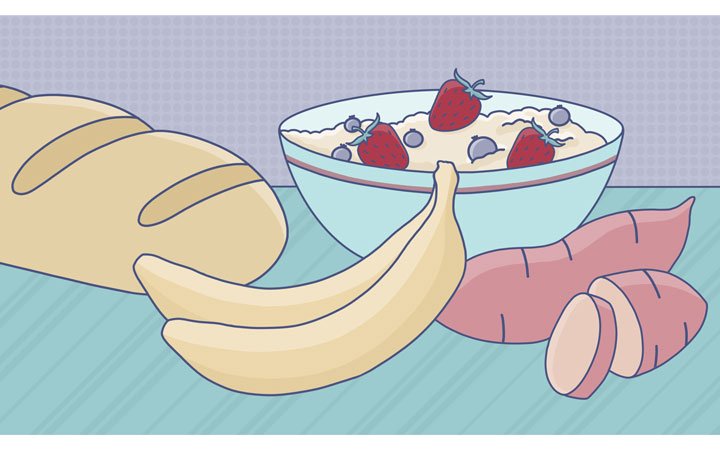 “Eating healthier carbohydrates can help prevent a host of chronic conditions, especially diabetes, but it can also ward off heart disease and various cancers,” Harvard Health says. The occasional high-GI meal that fosters good sleep is probably nothing much to be concerned about, but relying on a carb-rich meal to fall asleep quickly every night is likely not a reasonable long-term solution to sleep onset problems. 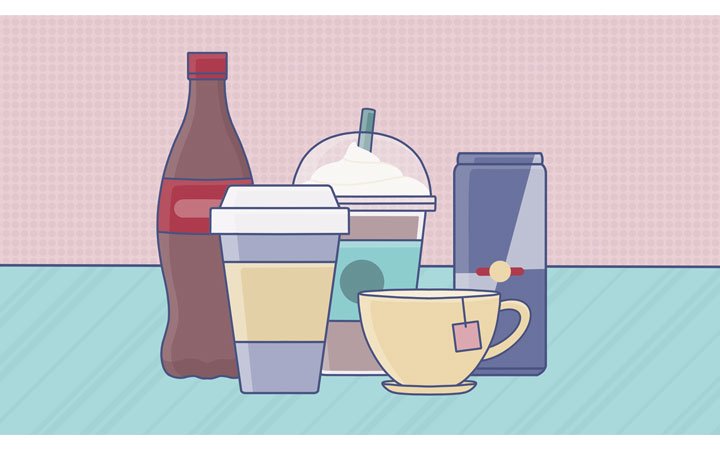 The most obvious example of this is caffeine. The Mayo Clinic says that up to 400 milligrams of coffee per day is generally safe for most adults, which equates to roughly four cups of brewed coffee. However, some people are more susceptible to caffeine than others, meaning that drinking a certain amount of caffeine throughout the day or after a certain time in the afternoon can inhibit sleep.

When quantifying caffeine intake, it’s important to include not just coffee and tea but also sodas, energy drinks, and caffeine-containing foods like chocolate. Another surprising source of caffeine? Medications.

“Caffeine is a common ingredient in many prescriptions and over-the-counter headache drugs,” the Cleveland Clinic explains. “Because analgesics (pain relievers) work more quickly and more efficiently with caffeine, patients are able to take less medication.” A few examples: 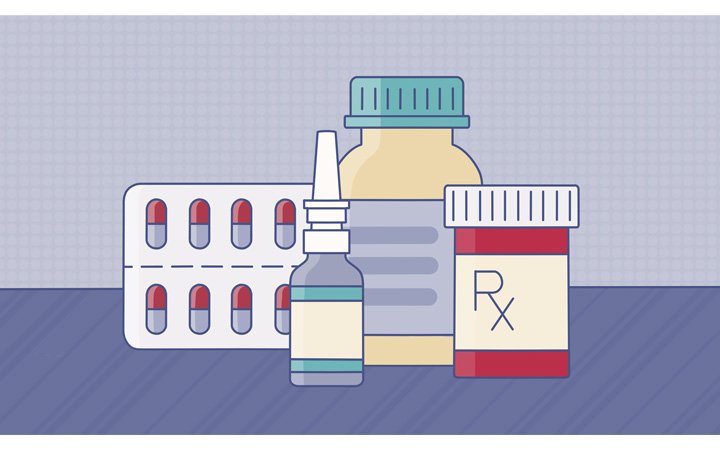 Check the caffeine content of any pain relievers before taking them in order to avoid the medication interfering with sleep onset.

Some foods can trigger acid reflux, which makes sleep challenging.

Acid reflux, also called gastroesophageal reflux (GER), occurs when stomach acid flows backward into the esophagus. “During an episode of acid reflux, you might feel a burning sensation in your chest (heartburn),” the Mayo Clinic says. “This can occur after eating a big meal or drinking coffee or alcohol.”

Experiencing heartburn at night can prevent sleep onset or cause nighttime wakeups. To avoid this, the Mayo Clinic says, stop eating at least two to three hours before bedtime.

Another solution is to avoid foods that trigger acid reflux: Common causes are spicy foods, extremely high-fat items, and alcohol. Acid reflux can also be treated with over-the-counter antacids.

A paper published in the journal Advances in Nutrition in September 2016 reviewed a number of studies on sleep and diet. Researchers concluded that some foods seem promising for shortening sleep onset time, but stressed that more research is necessary.

“Some foods, such as milk products, fish, fruit, and vegetables, also show sleep-promoting effects, but studies have been too diverse, short, and small to lead to firm conclusions,” the authors wrote. “This review thus finds that some dietary patterns and foods show promise as sleep modulators, but more research is necessary to draw definitive conclusions.” 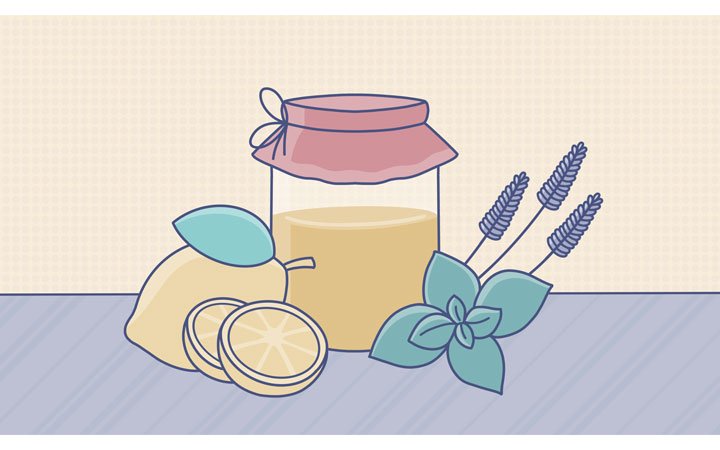 The study’s authors added: “It is unknown at this time if an overall diet approach, rather than inclusion or exclusion of specific foods, can improve sleep and, if it does, within what time frame benefits should be observed… It is comforting to note that the findings reported herein are in line with other dietary recommendations for health in the general population: increasing fruit and vegetable intakes, choosing whole grains (higher in fiber), and favoring vegetable oils (low in saturated fat).”

That said, some people swear by some foods and drinks as sleep aids.

One common example is that people recommend a hot cup of herbal tea before bed, or swear that a certain snack helps them fall asleep more quickly. Here’s what we do and don’t know about popular sleep-promoting foods: 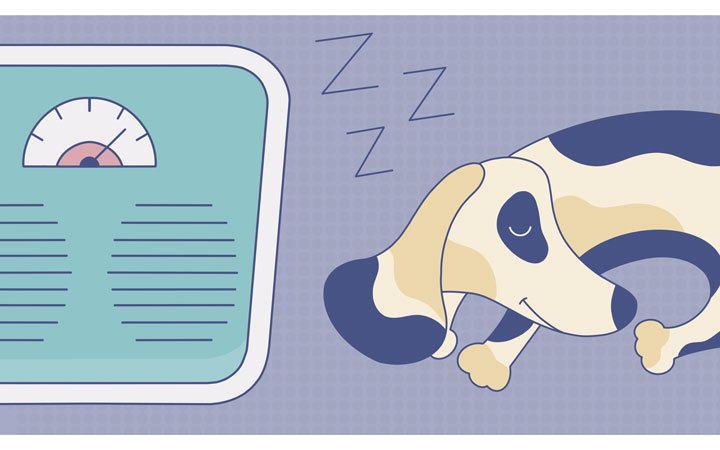 A paper in the peer-reviewed journal Obesity Reviews, published in 2017, examined the connection between stress, poor sleep, enhanced appetite, food cravings, and motivation towards physical activity. They found that stress affected all of these things, and also noted that inadequate sleep is linked to obesity.

“Not only do the adverse effects of stress influence sleep patterns, food intake, weight gain, abdominal obesity and the effects of weight loss interventions but evidence also suggests that improving nutritional status and sleeping patterns may reduce the severity of stress and other mental disorders,” study researchers wrote.

Bodyweight plays a role in many facets of health, including sleep disorders. The American Sleep Apnea Association stresses that being overweight or obese is not the only reason why someone might develop sleep apnea, but notes that “being overweight is still a high risk factor for the development of obstructive sleep apnea.”

The American Academy of Sleep Medicine (AASM) defines obstructive sleep apnea as “a sleep-related breathing disorder that involves a decrease or complete halt in airflow despite an ongoing effort to breathe.” This happens when the soft tissue in the back of the throat blocks the upper airway, pausing or halting breathing for 10 seconds or more — up to even one minute or longer. 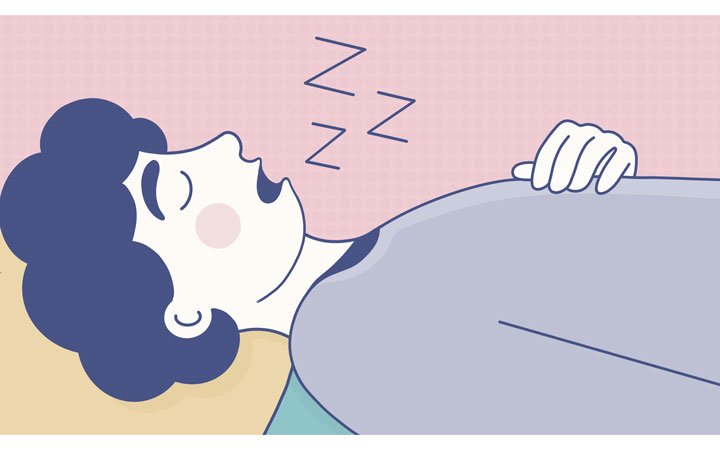 “The brain responds to the lack of oxygen by alerting the body, causing a brief arousal from sleep that restores normal breathing,” the AASM says. This pattern can occur hundreds of times in one night. The result is a fragmented quality of sleep that often produces an excessive level of daytime sleepiness.”

“If you’re overweight or obese, even a moderate loss of excess weight may help relieve constriction of your airway,” the Mayo Clinic says. “Losing weight can also improve your health and quality of life, and may reduce your sleepiness during the day.”

An October 2019 study found that sleep deprivation affects the type of foods people choose to eat. Researchers followed a group of 29 men and women over two different nights four weeks apart: During one night, participants got a normal night’s sleep. On the other night, they were only permitted to sleep for four hours total. The day after, participants were served three meals, but also offered a buffet of different snack options including less-nutritious foods.

After being sleep deprived, researcher Thorsten Kahnt, an assistant professor of neurology at Northwestern University Feinberg School of Medicine, said in an article: “We found participants changed their food choices. After being sleep deprived, they ate food with higher energy density (more calories per gram) like doughnuts, chocolate chip cookies, and potato chips.”

Kahnt suggests that this is because “sleep deprivation makes our brain more susceptible to enticing food smells.” He joked: “So maybe it might be worth taking a detour to avoid your local doughnut shop next time you catch a 6 a.m. flight.”

Ways To Enhance Sleep Through Diet

Most evidence on how to enhance sleep through diet is anecdotal and thus not totally backed by science. For example, some people swear by a cup of herbal tea to help them sleep at night – but it’s unclear what helps with sleep onset, the herbs themselves or the relaxing ritual of sitting and drinking something hot.

That said, there are a couple of ways to enhance sleep through diet — mostly related to meal timing and limiting things that can interfere with sleep.

“Circadian rhythms, metabolism, and nutrition are intimately linked, although effects of meal timing on the human circadian system are poorly understood,” a study published in the journal Current Biology in June 2017 explained. Translation: Meal times affect sleep, but the details aren’t totally clear. 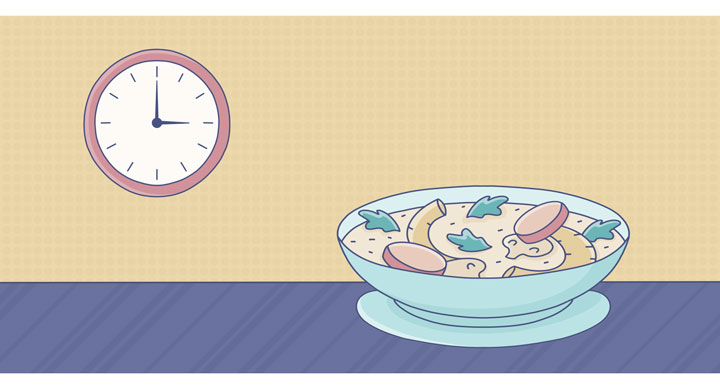 When to stop eating at night also depends on personal and professional schedules. Some people go to bed early and can stop eating at 6 p.m.; others are up until after midnight and would struggle with fasting for multiple hours before bed. LiveScience estimates that it takes the average person three hours to digest dinner and begin to feel hungry again, so a 2- or 3-hour buffer between dinner and bedtime seems reasonable.

Before reaching for a late-night snack, MIT recommends using the HALT acronym to establish a true motivation: Hunger, Anxiety, Loneliness, or Tiredness.” Instead of eating for a non-hunger reason, the site suggests, drink a glass of water or take a break to do something relaxing.

A pediatrician will be able to weigh in on diet recommendations for individual children and advise on whether commonly-held beliefs—like the idea that fatty fish is better for kids than meat in terms of improving sleep and mental health—hold any weight.

The Riley Hospital for Children at Indiana University Health explains that some kids will need a bedtime snack. “A kid who goes to bed hungry is going to have a tough time getting to sleep,” Dr. Stephanie Jackson, M.D., a pediatric neurologist, explains on the hospital’s website. “If you’re serving adequate portions at meals and your child consistently says she’s hungry at bedtime, a small snack is reasonable.”

Jackson recommends bedtime snacks that are high in protein or fiber, like “nuts, peanut butter, Greek yogurt, hummus, eggs, beans, tofu, berries, and whole grains.” It’s important for children to avoid caffeine before bed, which means that chocolate-y snacks are not recommended.

Finally, some kids may find it soothing to drink a glass of warm milk before bed. This protein-heavy snack can help keep them full through the night.

The relationship between food and sleep is incredibly complex and varies from person to person. Everyone has an individual tolerance for caffeine and alcohol and digests food at different rates. This means that foods or mealtimes that affect sleep for one person will have no effect on another.

Following a nutritionally balanced, healthy diet can improve overall health and sleep habits. Consult a doctor for any specific concerns about the intersection between diet and sleep.