how to make christmas chili

Some foods are freely associated with Christmas, and some aren’t. Think of Christmas food and you’ll probably think of a full Christmas dinner involving turkey first of all. After that, you might think of mince pies, Christmas cake and Christmas pudding - all big, rich dishes which will fill you up and keep you warm on a cold winter’s day. 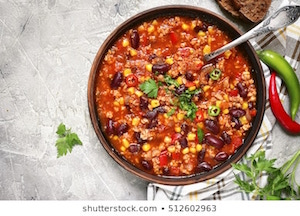 There is another way to warm yourself up when eating over Christmas, and that’s to make a Christmas chili. If you haven’t heard of it before, you’re in for a treat. Chili is for life, not just for Christmas, but it goes just as well during the holiday season as it does at any other time of year!

Just because it’s not traditional doesn’t mean that Christmas is the wrong time of year to enjoy a little chili heat. There’s a very good reason that chili is one of the world’s most popular ingredients; it adds that extra little kick to any dish and can make a good plate of food into a great one. The concept of chili heat even has a slot game named in its honor over at Rose Slots (an online slot website designed especially for women; spinning the reels isn’t just for the men to enjoy!), so the popularity of chili isn’t lost on those who design gambling games. Playing it without making yourself hungry is a different kind of challenge altogether, though, and the Mexican theme with its images of tequila might make you a little thirsty, too.

First off, here’s what you’ll need to make a Christmas chili.

Ingredients:
Two rinsed and drained 11 ounce can tomatillos (here’s an explanation of what those are if you haven’t come across them before)
Three dried ancho chilies, with the stems and seeds removed
A 3/4 cup of cilantro leaves, tightly packed
Two 14 ounce cans of tomatoes. Whole or diced are both fine.
One seeded fresh jalapeno pepper (just a small one!)
One and a half pounds of beef chuck, cut into half-inch pieces
Two tablespoons of olive oil
A cup of chopped green sweet peppers
Two cups of chopped onions
Four minced cloves of garlic
One cup of kernel corn, frozen but thawed
One teaspoon of crushed dried oregano
Two tablespoons of chili powder
Two fifteen ounce cans of kidney beans, or black beans, or both. Rinsed and dried.
Salt and ground black pepper
Any other toppings to suit your taste; avocado, green onions, cheese or sour cream are all safe bets, but you probably have your own preferred chili toppings.

You’ll be pleased to know that this is really easy to make!

First, get a blender or a food processor and pour in the ancho chilies, the tomatillos, the cilantro leaves, and the jalapeno pepper. Put the cover back on the processor or blender, and blend them until they’re nice and smooth, and set that mixture aside. When you are finished, blend the tomatoes as well, and set them aside, too. If you find the first mixture isn’t blending as you’d like, or won’t blend smoothly, try adding some of the liquid from the tomatoes. That should be all you need to get things working properly.

Next season your beef with the salt and pepper. Take the beef one half at a time, add one of your tablespoons of olive oil, and cook it in a Dutch oven or until it’s almost brown. Remember to drain off the fat once it’s done. Repeat the process with the other half of the beef, but this time stir in onions, garlic, and sweet peppers. Keep cooking and stirring it until the vegetables become tender, and the meat is properly browned. At that point, drain off all the fat from this half of the beef, put all the beef back together, and return it to the Dutch oven.

Now it’s time to stir in the rest of your ingredients, so add in your pureed tomatoes, the tomatillo mixture you made earlier, the corn, beans, oregano and chili powder. Bring it all the way up to boiling point, and then reduce the heat once it gets there. Put the cover onto the pot, and let it simmer for approximately one hour. Do check on it regularly though; the hour isn’t precise, and the moment your beef is tender and you’ve achieved the right consistency, it’s time to serve it and eat it; along with whichever toppings you’d like to add.

If you’d prefer, it is also possible to cook this dish in a slow cooker instead of a Dutch oven. Proceed through the first stage exactly as instructed, and then after seasoning your beef, place it into a five or six quart slow cooker, along with all of the remaining ingredients. Put the cover on, and let it cook over an eight to ten hour period on a low setting, or for four or five hours on a higher heat setting; whichever you’d prefer.

When cooking with chili, you should always treat it with care and respect. It’s an ingredient that can hurt you if you let it! Chili peppers contain oils that really disagree with your eyes and your skin when you make contact with them. Don’t touch them any more than is absolutely necessary to complete the cooking of the meal. It’s usually best advice to wear plastic or rubber gloves when handling them unless you’re very experienced, or somehow immune to them! Also wash your hands as soon as you’re no longer in contact with them; it’s all too easy to forget, wipe your face or your eyes a few minutes later, and experience some deeply unpleasant stinging.

We hope you enjoy the recipe as much as we did; it’s nice and simple and it’s bursting full of flavor. It’s also a lot easier to prepare if you’re cooking for the family than a whole Christmas dinner. Thanks for stopping by to read it; and Merry Christmas to all of you!