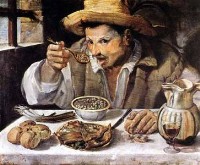 Soup: Say the name and a steaming bowl comes to mind. However, when the warm season approaches not many are in the mood for a sweaty session in front of a sweltering bowl.

Before I start my little dissertation, I want to reassure everyone: most of Italian soups are as good boiling hot as they are lukewarm.

Now that everyone is relaxed I will continue saying that soups are one of the oldest culinary preparations of mankind. The oldest way of cooking must have been roasting. We can guess how primitive men, as soon as they took control of fire, learned how to simply use the direct heat of the flame to cook foodstuff. Soup instead involved a more sophisticated evolution. The origin of soup is connected with the discovery of pottery and the invention of containers that could hold cooking liquid on the fire without breaking. This technique was available in the Mediterranean areas about 5000 B.C.

What a revolution boiling must have been! Tougher grains, roots, and many more vegetables became edible. All the remaining nourishment and flavor could be extracted from animal bones, including the highly caloric marrow. Boiling also opened a new array of possibilities. New sensational tastes and more sophisticated preparations started appearing: grain can make a soup thicker, oil bearing seed can enrich the flavor, and many different ingredients added to the pot change the final taste. Different mixes of meat together with vegetables and herbs created the first “dishes”. Later porridge-like preparations started appearing. The Romans acquired the practice of making these dishes, called puls, from the Etruscans. One of the modern derivations of puls is polenta, still so popular today in Northern Italy.

During the Middle Ages soup must have been the most common way of cooking. In times of scarcity of food nothing better than a soup helps utilize to the maximum the few edible resources to feed hungry families.

In the richer households soups or brodetti (brodo = broth) were made. The solids (meat or vegetables), when boiled, were either picked up with sticks, knives, or the bare fingers, or sometimes they were served separately from the liquid (broth) that was drunk directly from the bowl. Later during the Renaissance soups started being served as introduction to the meals or associated with the main courses. In addition, the introduction of the spoon allowed soups to become more sophisticated and complex.
The word “suppa” (soup, soupe, sop, sopa, sopen, zuppa) originates from a Frankish word (the Franks, were the most powerful of the Germanic tribes, who came to inhabit the former Roman provinces of Gaul, and who eventually became the French). In the Italian language it came to mean specifically a dish of bread soaked in the cooking broth. In fact the word inzuppare means to dip bread or cookies into a liquid (sop). On the other hand all soups take in the Italian language the name of minestra from the Latin word minestrare (meaning to serve dishes to the table).

In Italy there are light soups, mainly based on broth, generally served at the beginning of the dinner, or rustic chowder-like minestre added either of pasta or rice, that are thick and satisfying. The rice used for soups is the ever-present Carnaroli. It is Italian rice by the large grain that cooks evenly without becoming too soft. The pasta used in soups instead can be ”fresh pasta” cut in small squares (quadrucci) or larger irregular pieces (maltagliati – badly cut) or the thin capellini (angel hair). If dry pasta is used instead, it could be as small as the size of a rice grain (peperini or stelline), small elbows or tubes, or even just spaghetti cut in short pieces. Rice, grains, and pasta in soups must be cooked rigorously al dente, that is thoroughly cooked but still firm to the bite.

Among light soups we can mention the famous Tortellini in Brodo from Bologna: A very sophisticated dish made of little rings of pasta filled with an aromatic mix of meats, and boiled in meat broth. In Rome we find Stracciatella: the broth is brought to boiling temperature and a mix of egg and grated parmigiano cheese is slowly poured in it, forming small “rugs”. Italian broth is made out of beef or a mix of meats (beef, beef bones, chicken, and turkey), boiled together with vegetables (carrot, celery, tomato, potato, parsley, peppercorns, and cloves), and finally degreased and filtered to remove all the residues.

In Venice we find a very special soup: Risi e Bisi (Rice and Peas). The Venetians will tell you that this dish is neither a risotto nor a soup, since this soup-like dish is served to a creamy consistency.

It is an ancient recipe that since the 1300s was traditionally served to the “Doge” (the Duke, ruler of the Serenissima, the “Most Serene” Republic of Venice) on the 25th of April during the festivities for the day dedicated to St.Mark. Rice was a very important commodity in those times. Imported from the Far East, it was at times so rare to be sold by the grain as a spice. Rice was later planted in the plains of the Po River and became one of the staples for the people of the region.

In the mountainous regions of the Alps it is common the thick and satisfying Zuppa d’Orzo, barley soup. The best known soup among the Italian minestre is Minestrone (meaning big soup), done with beans and a mix of all the vegetables in season. In fact the word Minestrone became synonym of “a mix of all things”. In Liguria the minestrone is added of a large scoop of pesto for greater flavor. In Tuscany they have a reputation for the best Pasta e Fagioli (beans soup), also known in the United States as “pasta fazul”, from a dialectal expression of the Italian immigrants. It is also here in Tuscany that onion soup, called carabaccia was originated. The legend is that Caterina De’ Medici, marrying the future King of France, took with her the cooks that will spread in France the Tuscan dishes. Among them the carabaccia onion soup soon became the French Soupe a l’Oignon. In Tuscany we will find also Ribollita a thick soup of black cabbage, and Pappa al Pomodoro a tomato soup thickened with slices of country bread.

In Naples and the Campania Region we find a soup that was made famous in the United States by the Italian immigrants from that area: Minestra Maritata. It is a very rich soup made of meats (prosciutto, beef, sausage, and pork), vegetables (cabbage, escarole, cicory, and broccoli) and flavoring herbs (carrots, celery, onion, and parsley). The literal translation of the name is “married soup”, meaning the ingredients (meats and vegetables) are perfectly “married” and blended together. Some translator erroneously thought it was served during Italian weddings and translated it as “Wedding Soup”, creating a lot of confusion on the meaning of this dish.

In Sicily finally we find the Maccu di Fave a simple dense soup made of dry fava beans soaked in water, boiled until tender, and then mashed to the consistency of a purée. It is eventually served lukewarm with a drizzle of Sicilian extra-virgin olive oil. This simple preparation is apparently very ancient and goes back to Roman times, when porridge-like soups where very common. The name itself comes from the Latin word maccare meaning to mash.

Zuppe di Pesce (fish soups) would require a chapter by themselves. Italy is a peninsula with more than 2,500 km (1,600 miles) of coastline. Every town along the coast claims a different type of fish soup, with a distinctive name and using fishes or crustaceans of the area. Ciuppin, Buridda, Cacciucco, Caldaro, Cassola, Brodetto, Zuppa, Sopa, Boreto, Capperata : The name varies with the region. The way it should be done and the fish to be used is often a matter for fierce disputes.

Light soups and fish soups are served hot, but all the other Italian minestre can be enjoyed lukewarm or even cold, and can be prepared all year round. A word of advice in case you want to serve lukewarm a soup with pasta, rice, or other grains. Remember that the soup will become much thicker. In this case the pasta should be done not al dente, but a little undercooked: it will soften a lot while sitting in the pot. And remember to keep aside a little broth to be added just before serving to make the soup thinner.

In conclusion, soups in Italy are as diverse as the Italian regions, and we can really say: Tell me what soup you eat, and I will tell you where you come from.

Make the “battuto”, finely chopping together by hand or in a food processor the bacon, onion, celery, carrots, and parsley.
Put in a stockpot the extra-virgin olive oil, and turn the heat to medium.
Add the “battuto” (bacon / vegetable mixture) and the red pepper.
Sauté for 2 or 3 minutes until the onion is soft. Add tomatoes, and broth.
Cover the pan; bring to a boil, then lower the heat to medium low, bringing the soup to a simmer. Salt lightly.
Cook for about 20 minutes, or until the potatoes are soft.
Add the pasta and cook it for the time indicated by the manufacturer, but taste frequently until “al dente”, which is firm but not overcooked. Correct salt if necessary.
Add the grated pecorino romano cheese. Serve warm in soup plates or bowls.

In a saucepan, put the butter, olive oil, bacon, and onion. Turn heat to medium.
When the onion becomes translucent and the bacon is soft, add peas, 4–5 tablespoons broth, stir, and cover.
Cook for about 5–10 minutes.
Add the rest of the broth, and bring the mixture to a boil.
Add rice, and cook for about 20 minutes.
When the rice is al dente (firm but not too soft or overcooked), and the soup has a dense consistency, taste and add salt if necessary.
Add pepper, parmigiano cheese, and parsley.
Stir briefly and serve warm.

Finely dice all vegetables: potatoes, lettuce, tomatoes, and beets, keeping them separate.
Chop finely together, by hand or in a food processor, the bacon, carrots, onion, and celery, until reduced to a fine paste.
Put in a stock pot the extra-virgin olive oil, and turn the heat to medium.
Add the bacon / vegetable mixture.
Sauté shortly until the onion appears soft and translucent.
Add diced potatoes. Cook for about 1 minute.
Stir in the parsley, and tomatoes. Add water, broth, salt and pepper, and bring to a boil.
After about 10 minutes add zucchini, lettuce, and beets.
Cook for an additional 10 minutes.
Add the pasta and cook for the time indicated by the manufacturer or taste until is firm but not overcooked (al dente).
Correct salts if necessary, add a pinch of pepper, and the grated parmigiano. Serve warm in soup plates or bowls, topped with freshly grated parmigiano cheese.

Use in minestrone any kind of seasonal vegetables. The tender vegetables are added in a second interval, to prevent overcooking them.