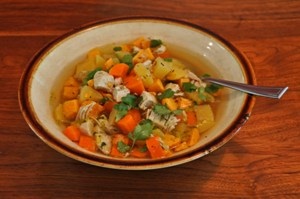 Recently, I came across a recipe for Cream of Parsnip soup. It called for pureed parsnips, heavy cream and chicken broth. Surely it would be delicious—once.

I seldom use a recipe for soup a second time. A recipe for soup can be as deadening as sheet music for a jazz combo. Good soup, like jazz, is improvisation. Start with the instrument you have and throw in what seems to work. Unless you do something crazy, like adding too much cayenne, the sound will come out fine.

Recently, I rummaged in a freezer bin I reserve for soup. I found five pounds of beef bones, four desiccated chicken carcasses and one whole chicken frozen for about a year; a veal parmesan frozen dinner that I have no idea how I acquired. Digging deeper, I pulled out a half dozen plastic containers filled with a variety of sauces, stocks and pan juices, several containers of tomato sauce frozen in recycled yogurt cups, about a quarter pound of hamburger, some leftover cooked London broil and a plastic bag that appeared to contain about a half cup of cooked lentils.

From the vegetable bin I retrieved a half rutabaga, a quarter head of green cabbage, a withered turnip, several woody carrots and half an onion. I threw out a half zucchini, some slimy green onions, a nasty looking half green pepper and a handful of loose grapes. The pantry yielded a can of turnip greens, a half package of barley, and box of a prepared rice mixture that included dried bits of “garden vegetables.”

Obviously, I could not use all of this bountiful collection of leftovers, lookedovers and packaged food saved from the garbage can, but I have the makings of an excellent jazz soup.

Jazz soup? Jazz makes use of the instruments that are available--piano, drums, bass, saxophone, clarinet, trumpet, xylophone, guitar, banjo, violin—just about anything that makes sound can become a jazz instrument. Once the base of instruments is assembled, jazz takes off from a chord, a riff or a bit of business, circling the theme and looping away. Music boils and fulminates, froths or rises like steam. It is repetitive or varied, it circles, soars, seeks quiet and bursts free.

Soup too is improvisational, using what has been saved, what is available, what was overlooked, bringing them together in a place where similarities harmonize and dissimilarities complement. Jazz is not cacophony, and neither is soup. In my pantry I also found a handful of dried coconut. Coconut might work in some kinds of soup, but in this it would be as jarring as a few bars from “Climb Every Mountain,” in “Sweet Georgia Brown.”

I returned the chicken and chicken carcasses to the freezer, thawed the beef bones in the microwave, and set the oven at 350. I dribbled olive oil on the bones, cut up an onion, and roasted the bones and onion for an hour, which partially carmelized the onion, cooked the remaining meat and rendered the fat. Then I stacked the bones and onions in a kettle and simmered them for the rest of the day. By the end of the day, I had rendered about two quarts of beef stock that to tell the truth looked richer than it tasted.

Improvisation continued. I skimmed fat off the broth, added the canned turnip greens, the package of curried lentils and the odds and ends of London broil. I sauteed the hamburger and added it to the pot with the chopped cabbage, carrots, the turnip, a potato, half cup of barley and some of the rice. I added a palmful of sea salt and let it simmer an hour and a half. Then I ate a big bowlful. It took this soup at least eight hours to cook. It was just OK.

I hoped that the flavor would improve as the soup sat in the fridge and the flavors mingled. The next night, it was better—beef-vegetable soup in weak broth without any underlying richness or complexity. I froze most of it, but I left out two pints. The next night, I cooked a Chinese stir-fry made with chicken, garlic, ginger, canned creamed corn and frozen corn. These unlikely ingredients made two delicious meals with a half cup left over.

A few nights later, I added some chicken broth and the remainder of the chicken and corn dish to the beef soup and a new soup was born. The broth and vegetables had mellowed and combined. But the stirfried corn added a peppery undertone and the corn kernels gave an interesting variety in texture to the rice and barley. This was real soup. Like an evening of jazz, it probably can’t be recreated, but it’s the process that’s important.

Jazz soup can evolve over months or even years, and it doesn’t necessarily require a weekend to simmer bones and chicken carcasses. A few years ago, tired of broiled chicken for dinner, I began simmering a bone-in chicken breast in water to-cover with a few vegetables. Usually I added cut up potato and carrot and whatever else might be in the fridge, such as brussels sprouts and rutabagas. Then I began adding a few extra ingredients: a spoonful of chicken bouillon and some dried thyme.

I found that rutabagas leave a clear, refreshing aftertaste and gradually the soup became carrot and rutabaga. Then one night I cut up and threw in half a yam. Its sweetness balanced the sharp, almost bitter flavor of the rutabagas. I was making this quick chicken soup at least once a week, refrigerating the leftovers and adding them to the new batch. But soup makers, like jazz musicians, can’t leave well enough alone.

One evening I pulled a container of green curry paste from the fridge. I added about a teaspoon of this to the soup and a nice background music soup took off with a high, ascending whine. This soup has everything—rich broth, chicken, unctuous chunks of yam, carrot and rutabaga and underneath it counterpoint tastes of chili and lemon grass. I add chopped cilantro before serving. It takes about 10 minutes to prepare and half hour to 45 minutes to cook.

I started with a base of chicken broth. Then I loosely followed a recipe for Swedish yellow split pea soup using potatoes, carrots, yellow split peas, a ham shank and marjoram. But earlier I had made an Indian curry that included tomatoes, onions, chickpeas, mustard, cumin, ginger, coriander and garlic.

Both the soup and the curry were delicious, but one is spicy and the other is subtle, and they come from different culinary traditions. But like a jazz musician, I must have known that these would fuse and mellow into something else. I mashed up half the chickpeas and dumped the remaining Indian curry into the remaining Swedish soup. The taste of curry was subtle but deeply ingrained in the soup. And the soft peas were complemented by the grainy chickpeas. I could barely taste the marjoram, like a whispered melody.

This was truly jazz soup, starting with the known, and combining the unlikely to make new music.


1. Place chicken breast in pan and cover with broth.

4. Strip chicken meat from ribs and cut into small cubes. Return to pot.

Foster Church is a Pulitzer Prize winning journalist and travel writer based in Portland, Oregon. His book of travels in small towns, "Discovering Main Street," will appear next year.