Ask any true San Franciscan to list the most important things in life, and they’re bound to put “good food” at the top of the list. Food is such a part of our culture that we can’t imagine a life that didn’t involve regular discussions about where to get the best sushi or which taqueria grills, rather than steams, their tortillas. The culture of food is close to our hearts. It is fitting, then, that one of the cuisines San Francisco is most noted for is called Dim Sum or “a little bit of heart.” 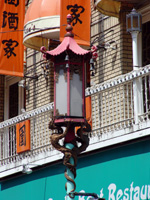 Dating back to the 10 th century on Canton’s famous Silk Road, Dim Sum originated in the “yum cha” (tea-drinking) establishments that catered to weary travelers and rural farmers. As the digestive qualities of tea became known, proprietors began to offer their customers selections of snacks to go along with the invigorating brew, and the art of dim sum was born. Today there are more than 2,000 varieties of dim sum—from pillowy buns stuffed with tender barbecued pork to delicate dumpling wrappers filled with chunks of juicy shrimp, to lettuce cups folded around spicy minced squab.

Traditionally served from first thing in the morning into the early afternoon, some believe the cuisine inspired the western concept of “brunch.” And, really, what could be better on a lazy Sunday morning than a never-ending stream of tantalizing treats wheeled by your table where you can pick and choose among them with simple points and nods. There are no menus, and you don't need to decide what you’ll have at the beginning of the meal. Simply sit back and wait for waiters to pass by with their varied offerings—the kitchen sends out new varieties every few minutes—and feel free to ask if you’re unsure of what a particular dish is. At the end of the meal, your plates will be tallied to determine the amount of your bill.

San Francisco is home to dozens of top-notch dim sum restaurants. Lingering in places with names like Good Luck Dim Sum, Dol Ho and Hang Ah its easy to become enthralled by the drama of these teahouses—the clatter of dumpling-laden trolleys trundling over linoleum floors, the exotic sounds of spoken Chinese, unusual treats glistening in threes and fours on little plates and nestled in tiny bamboo steamers. The scene is mesmerizing, but the spicy, meaty aromas will invariably rouse you from your trance at least long enough to point out your selections of steamed, baked, pan-fried, deep-fried savory and sweet delectables.

Finding good dim sum in San Francisco is hardly a challenge—from the financial district to Chinatown to the outer Richmond, the Sunset district and even SOMA, this city is virtually bursting with tasty dumplings. Your best bet for stumbling on a prime dim sum spot is simply to wander through Chinatown or down Clement Street, where storefronts filled with eye-catching displays of the tasty treats—from lofty steamed buns stuffed with pork, vegetables or chicken to deep-fried delicacies like crab claws stuffed with shrimp—beckon on every block. Here are five of the best spots to try:

This large, bustling restaurant in the outer Richmond district is widely considered to serve the very best dim sum in town. Near-perfect renditions of standards like barbecued pork buns and Siu Mai (pork dumplings) hold their own alongside well-loved house specialties like delicate Pea Tip and Shrimp Dumplings and juicy and addictive Foil-Wrapped Chicken. The prices are considerably higher here than at storefront counterparts, but the extra cost is justified by the superior ambience, service, cleanliness and, above all, quality.

Since 1958, Yank Sing has established itself as a true San Francisco institution. Another on the spendy end of the spectrum, business people flock here from nearby offices for weekday lunches, and on weekends the elegant dining room fills up with tourists and locals alike. Once you’ve scored a seat and are happily devouring an impressive variety of dishes you won’t wonder why. Don’t miss their famous minced squab, Peking duck, and custard tarts. Woo Gok (deep-fried, pork-filled taro dumplings) are crisp, flavorful and not at all greasy, putting all others to shame. The Har Gao (shrimp dumplings) are some of the best you’ll find—plump, briny, sweet shrimp wrapped in a disarmingly tender rice noodle wrapper.

This bustling storefront bakery makes up in taste what it lacks in ambience. Designed primarily for take-out business, the narrow space is barely big enough to contain the hordes of mostly Chinese customers who knowingly call orders across the counter to crabby ladies briskly packing assorted delicacies into pink pastry boxes. If you can’t wait until you get home to dive into your dumplings, there are several tables in the back. Prices here are unbelievably cheap (ranging from $1 for three-piece servings of many items to a high of $1.70 for a lotus leaf filled with pork). These aren’t the most delicate dumplings you’ll ever savor, but you’ll definitely get good bang for your buck here. Try the Fun Kor (steamed rice paper-wrapped dumplings filled with pork, water chestnuts, and peanuts) or crispy steamed-then-pan-fried Turnip Cake.

Opened in 1920, this Chinatown stalwart claims to be the oldest Chinese restaurant in the city. To find it, climb the steep half block up Sacramento from Grant toward Stockton and duck into the alley next to the playground. Dingy, dark and a bit greasy all over, this is an unlikely place to discover unforgettable culinary delights. But alas, one bite into one of their airy buns filled with succulent, sweet, salty and tender barbecued pork and you’ll forget all about the low-ceilinged, slightly sticky decor. Despite the fact that this spot has been “discovered” by tourists in recent years, the quality remains high and the prices low.

This true hole-in-the-wall with a reassuringly mostly Chinese clientele churns out a wide variety of tasty dim sum at extremely reasonable prices. The dumplings are meaty and fresh, even if the service can be a bit unfriendly. Try the Chive and Shrimp Dumplings—tender, sweet shrimp punctuated by brightly flavored chives inside a delicate rice noodle wrapper. Where many other superb dumpling houses have been overrun by swarms of tourists, Dol Ho somehow manages to maintain an aura of the “real” Chinatown.

Robin Donovan is a San Francisco-based freelance journalist . She is writing her first cookbook—Campfire Cuisine: Eating Well In the Great Outdoors—which will be published by Quirk Books in May 2006.