The Story of Sourdough Bread

How the 49ers Struck Culinary Gold 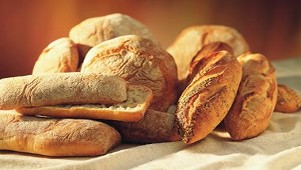 Everyone knows1849 as the year San Francisco was swarmed by raucous young men in hot pursuit of the “gold in them thar hills,” but another valuable resource “discovered” here that year put San Francisco on the culinary map. “Lactobacillus sanfrancisco” may not sound like a precious commodity, but it's the secret ingredient that makes San Francisco’s sourdough bread world-famous. And the story of the original San Francisco sourdough is intricately tied to the tale of the 49ers. 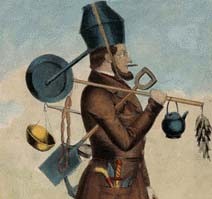 Using bread “starters”—an ancient method of making bread with a fermented mixture of flour, water, and yeast—was common practice in the 19 th century. Miners purchased such starters in San Francisco and carried them on their treasure-seeking journeys to the Sierra foothills, where they baked loaves with a unique, sour tang found nowhere else in the world. Their sourdough bread was so much a part of the culture that seasoned prospectors came to be known as “sourdoughs”—having long fermented in the mines. 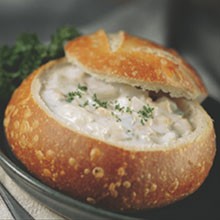 Meanwhile, back in San Francisco, an enterprising French baker named Isidore Boudin was drawing crowds with the delicious aromas wafting from his ovens. Just down the hill from Boudin’s tiny old-world bakery on Dupont Street (now Grant Avenue), the “Barbary Coast” was a bawdy bedlam where fortunes were won and lost, vices indulged, appetites fed—a place where a weary miner could find a decent meal, a bottle of hooch, a high-stakes card game, and any number of naughty diversions and creature comforts. The city teemed with speculators, gamblers, mavericks, and adventurers of all sorts—and they all flocked to Boudin’s for his exquisite French-style bread.

When Boudin ingeniously thought to combine the popular sourdough starter with the artistry of his native country’s baking traditions, he struck culinary gold—a golden loaf, crispy-chewy on the outside, airy and light on the inside, with that distinctive tangy bite. Soon everyone from hard-luck vagabonds to the city’s elite were lining up each morning for a fresh-baked loaf of his addictive sourdough bread.

What the miners and Boudin had stumbled upon was a group of wild microorganisms, which thrive only here in the Bay Area’s unique climate and work together in a feat of culinary science to produce the unparalleled bread. While most breads are leavened using a single genetic strain of commercial yeast—trading flavor for consistency and predictability—sourdough relies on these wild microorganisms for leavening as well as flavor. Using a bowl of flour and water as bait, the baker makes a starter by capturing yeasts and bacteria (including lactobacillus sanfrancisco) from the air, the mixing bowl itself, even the baker’s hands. Feeding on the flour, these microorganisms begin to multiply. The yeasts give off carbon dioxide, which makes the dough rise, while the bacteria produce lactic acid and acetic acid (vinegar), which contribute the sour flavor. Once the dough is made, a bit of it is folded back into the unused portion of the starter, providing sustenance for the ever-growing colony of wee wildies, which is henceforth known as “the mother.” Fed a regular diet of flour and water, this mother strain continues to multiply, creating new “babies” every day, producing descendents indefinitely. In fact, the Boudin Bakery still uses the same “mother” strain that was created by Isidore more than 150 years ago.

While sourdough breads have been made throughout the world—as long ago and far away as Egypt while the pyramids were being built— San Francisco’s sourdough is widely regarded as the best in the world. Soon after 1849, several other bakeries sprung up in the Bay Area—including Parisian in San Francisco and Toscana and Colombo in Oakland—that, like Boudin, built their reputations on superb sourdough bread. Today, all four of these bakeries are still in operation—Parisian, Toscana and Colombo under the parent company San Francisco French Bread Company, and Boudin—which claims to be the oldest business in San Francisco—as a thriving chain of bakery/cafés found throughout California and elsewhere. Many exquisite newer bakeries, too, make wonderful sourdough that is sold in gourmet shops and supermarkets and served in fine restaurants throughout the city and beyond.

Available in most Bay Area supermarkets—and even at the airport—under the Parisian label.