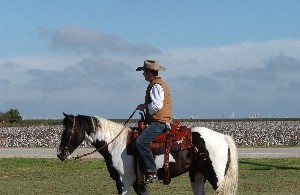 Native Texan Tim Love wears many hats. He is a cowboy who calls his cooking “Urban Western Cuisine.” He is chef and owner of The Lonesome Dove Western Bistro in Fort Worth, Texas; cookbook author (Tim Love on the Lonesome Dove Trail); Cowboy & Indians magazine columnist; and culinary instructor. Tim also has his own line of Lonesome Dove sauces (BBQ and Guajillo Ranchero); his own wine label with both Chardonnay and Cabernet Sauvignon bottled for the restaurant; a new line of cookware called Love Style Restaurant Edition Cookware; and owns the White Elephant Saloon adjacent to the restaurant. In his spare time Tim appears on radio and television shows and has taken 2 large trail drives across the country.

The first one was in August of 2003 when Tim was asked to teach at the James Beard house in New York City as part of the Rising Star of America’s cuisine program. He was the first Texas chef to do so. In the spirit of Larry McMurtry’s novel Lonesome Dove, Tim and the Lonesome Dove team, including his wife Emilie, took their inaugural trail drive. Tim hitched up some horses, organized a wagon train and headed east. The group stopped along the way for ingredients at farmer’s markets: Arkansas for hibiscus juice and blue corn; Tennessee for blackberries and watercress; Virginia for ham, Philadelphia for boar shanks and Washington, D.C. for vegetables. 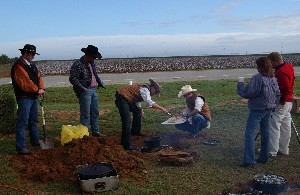 In the fall of 2004 Love and his crew headed west to raise money for Spoons Across America, an organization dedicated to educating children about good nutrition. The group was made up of 25 people including a photographer and 2 musicians , three 42 foot tour buses, a huge Chevy truck with a six-horse trailer and a Food Network film crew. Five fund raising dinners were cooked along the way as the group traveled from Fort Worth, Texas to Lubbock, Texas to Santa Fe, New Mexico to Scottsdale, Arizona to Las Vegas, Nevada to Los Angeles, California to Costa Mesa, California. 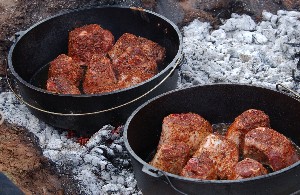 Back in Fort Worth, Tim is busy with his many projects. The Lonesome Dove Western Bistro is located in the historic Fort Worth stockyards and has 13 tables. The 280 square-foot kitchen has a couple of two-door refrigerators—nothing fancy or large. An adjacent building has 3 private dining rooms, including a 5000 bottle wine room. Expect to see a long bar, tin ceiling, Western memorabilia and a Texas flag on the kitchen window.

Method for venison and mojo
1. Set chops out of refrigerator 30 minutes prior to cooking.
2. In a 2 quart sauce pan, bring veal stock to a boil then reduce to simmer until reduced by half.
3. In a separate 1 quart sauce pan, add red wine vinegar, sugar and cherries. Bring to a boil and reduce by 1/3.
4. Add two sauces together and reduce by 1/3. Should be thick and glassy.
5. Keep warm.
6. Season chops with salt and pepper and then game rub.
7. Coat the bottom of sauté pan with oil, heat and sear each cut of meat for 30 seconds on each side.
8. Place seared deer in 375 degree oven for 6 minutes, to finish.
9. Plate deer and ladle with mojo. Place generous spoonful of succotash next to deer.

Method for the Shanks
1. Mix flour, chile powder, salt, and pepper together.
2. Roll the shanks in the flour mixture.
3. In a large roasting pan heat up the oil. Sear both sides of all shanks at the same time. Add onion, carrot, celery, and garlic and continue to sear. Add wine, stock, thyme, rosemary and bay leaves.
4. Bring to a boil and then reduce to a simmer and cover for 2 ½ hours turning the shanks every 15 minutes. Meat should be very tender but stay on the bone.
5. Strain the sauce and reduce by half and add butter. Serve shank with three bean ragout, fresh ricotta and a little of the pan sauce.

Pick through all beans, removing any foreign objects. Put all beans in a large pot and cover with cold water. Put a lid on this pot and let beans soak for 6 hours or overnight. Rinse beans and return to pot, add all other ingredients, cover with water. Bring to a boil for 2 hours, adding water as needed. Season with salt and pepper to taste.

1. Preheat oven to 450 degrees.
2. Arrange bones in a roasting pan large enough to hold them in a single layer. Roast in the oven until dark golden brown, about 1 ½ hours, turning to brown all sides.
3. After the first hour, add the remaining ingredients to brown. Transfer the bones and vegetables to a large stockpot, 10- to 12- quarts.
4. Pour off the fat from the roasting pan and deglaze the pan with 2 cups of water, scraping up any particles that stick to the bottom of pan. Pour this into the stockpot with enough additional water to cover all ingredients by 3 inches.
5. Bring water to a boil, reduce heat and simmer, uncovered, 4 to 6 hours, skimming the foam as it accumulates on top, and adding water as needed to keep the bones and vegetables covered at all times.
6. Strain the liquid into a clean pot, pressing down to extract all juices. Reduce this mixture, over medium heat, until 2 quarts remain.
7. Cool and refrigerate in a covered container for up to 3 days, discarding any hardened layer of fat before using or freezing.