The History of Tiramisu

Where and how this famous dessert was invented. 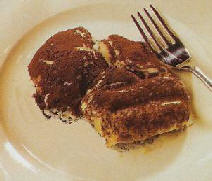 Open an old Italian cookbook, browse through the index and… surprise! No Tiramisu’. My first encounter with Tiramisu’ was in 1985. I was in Italy at that time: A friend of mine told me about this new recipe she got. She was so enthusiastic about it that I felt compelled to try it immediately. The taste was unbelievably good, as never I had tasted before. Since then I fell in love with this dessert.

Everybody knows by now that Tiramisu’ means “pick-me-up” in Italian, for the high energetic content (eggs and sugar) and the caffeine of the strong espresso coffee. There are many different stories about the origin of Tiramisu’. It is a layered cake; therefore some people place its origin in Tuscany, where another famous layered Italian dessert is very popular. It is called “Zuppa Inglese” (English Soup). It is not English and it is not a soup. Instead is a simple cake of ladyfingers or sponge cake, soaked in “alkermes” liquor, and alternated layers of chocolate and egg custard. Layered cakes have been around for long time. The brilliant idea in Tiramisu’ is not in the technique of layering, but in the components. The great invention of combining together coffee, zabaglione cream, and chocolate: This is the true innovation in Tiramisu’.

I love to study history of food. In my book “The Timeless Art of Italian Cuisine – Centuries of Scrumptious Dining”, there is extensive information about culinary history of the various regions of Italy. I tried to trace the origin of Tiramisu’ investigating many Italian cookbooks. The first clue is by the famous Italian gastronome Giuseppe Maffioli. In his book “Il ghiottone Veneto”, (The Venetian Glutton) first published in 1968, he talks extensively about Zabaglione custard. The name of this cream originates from Zabaja, a sweet dessert popular in the Illiria region. It is the coastal area across the Adriatic Sea that was Venetian territory for long time during the golden age of the “Repubblica Serenissima” (The Most Serene Republic) of Venice. Zabaglione was prepared in those times with sweet Cyprus wine.

“The groom’s bachelor friends”, says Maffioli, “at the end of the long wedding banquet, maliciously teasing, gave to him before the couple retired a big bottle of zabajon, to guarantee a successful and prolonged honeymoon”. “The zabajon”, Maffioli continues, “was sometimes added of whipped cream, but in this case was served very cold, almost frozen, and accompanied by the baicoli, small thin Venetian cookies invented in the 1700’s by a baker in the Santa Margherita suburb of Venice”. As we can notice, the addition of whipped cream, the serving temperature, the cookies, all these elements are close to the modern Tiramisu’ recipe. And even the allusion to the energetic properties of the Zabaglione, seem to refer to the Tiramisu’ name.

Later in my research the oldest recipe I could find was in the book by Giovanni Capnist “I Dolci del Veneto” (The Desserts of Veneto). The first edition was published in 1983 and has a classic recipe for Tiramisu’. “Recent recipe with infinite variations from the town of Treviso”, says Capnist, “discovery of restaurants more then family tradition”.

But the final word on the origin of Tiramisu’ is from the book by Fernando e Tina Raris “La Marca Gastronomica” published in 1998, a book entirely dedicated to the cuisine from the town of Treviso. The authors remember what Giuseppe Maffioli wrote in an article in 1981: “Tiramisu’ was born recently, just 10 years ago in the town of Treviso. It was proposed for the first time in the restaurant Le Beccherie. The dessert and its name became immediately extremely popular, and this cake and the name where copied by many restaurants first in Treviso then all around Italy”. Still today the restaurant “Le Beccherie” makes the dessert with the classical recipe: ladyfingers soaked in bitter strong espresso coffee, mascarpone-zabaglione cream, and bitter cocoa powder. Alba and Ado Campeol, owners of the restaurant regret they didn’t patent the name and the recipe, especially to avoid all the speculation and guesses on the origin of this cake, and the diffusion of so many recipes that have nothing to do with the original Tiramisu’.

I tried countless different recipes form the infinite variations of Tiramisu’, but the classic one, (the recipe I show on my website), the recipe from the “Le Beccherie” restaurant, is still the one I prepare today and the one I prefer.

As an example of one of the many delicious variation of Tiramisu’ I am showing on my website a step-by-step recipe for the “Tiramisu’ with Mixed Berries” that is quickly becoming a new classic.