An Interview with Anthony Dias Blue 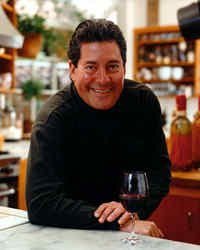 This typical coastal bisque-like soup calls for immature female blue crabs, which are less meaty than their male counterparts, but may contain roe. This is a rich, smooth and very elegant soup.

Carefully pick over the crabmeat for shell. Set the roe aside.

Melt the butter in a large sauce pan over low heat. Add the flour, stirring until it is completely dissolved. Cook for 2 minutes, stirring constantly with a whisk. Remove the pan from the heat and pour in the cream and milk,
whisking to combine. Return the pan to the heat, whisking until the liquid is completely smooth.

Increase the heat to medium. Stir in the crabmeat, Worcestershire sauce, lemon zest and onion. Reduce the heat and simmer for 20 minutes, stirring occasionally. Stir in pepper; season with salt.

To serve: Divide the roe (if you have it) among 8 soup plates, put 1 teaspoon of good Madeira into each bowl and ladle in the soup, making sure the crabmeat is evenly distributed. Garnish with a pinch of paprika on top of
each serving.

The pizza has had a rebirth in California. This Italian oven-roasted bread, which originated on the back streets of Naples, has been transformed into an upscale confection by Wolfgang Puck and a coterie of California cooks. This fairely treaditional version teams several ingredients that are regularly part of the
new California cuisine.

Preheat the oven to 400°F. Cut the top off the head of garlic to expose the cloves. Rub with 1 teaspoon of the oil and loosely wrap in aluminum foil. Roast for about 1 hour or until the cloves are soft and slightly caramelized. Cool.

Meanwhile, cut the stem and top third off of each artichoke. Snap off the tough outer leaves until only the tender greenish-yellow leaves remain. Cut the hearts vertically into 1/4 inch thick slices or wedges. Heat the remaining 3 tablespoons of oil in a medium skillet; add the artichokes slices and sauté, stirring occasionally, until the artichokes are tender, about 10 minutes. Deglaze the pan with the vinegar; set aside.

Place the bell pepper over an open flame or under the broiler and cook until charred and blackened on all sides. Place in a paper bag and set aside 10 minutes. Remove the pepper from the bag and peel off the charred skin. Seed the pepper and cut it into thin slices.

Raise the oven temperature to 450°F. Squeeze the roasted garlic cloves out of their skins and onto the bread shell. With a thin metal spatula, spread the cloves over the bread shell to cover it completely (they will now be in a paste-like form). Distribute the artichokes, bell pepper, and cheeses evenly over the bread shell. Bake about 8 minutes until hot and the cheese is melted. Sprinkle with the thyme.

A glorious way to showcase northwestern raspberries and late-harvest riesling.

Prepare a double broiler or select a medium stainless steel bowl and saucepan in which the bowl will sit comfortably. Fill the saucepan with a few inches of water and bring to a boil. Place the yolks and granulated sugar in the bowl and whisk until smooth. Whisk in the wine. Place the bowl into the saucepan and continue to whisk constantly and rapidly until the mixture becomes thick and fluffy and there is no trace of liquid left in the bottom of the bowl. This will take less than 5 minutes.

Immediately remove the bowl from the saucepan and set it in a large bowl filled with ice water. Continue to whisk the mixture until it has cooled completely.

In another bowl, whip the cream to form soft peaks and gently fold into the cooled mixture.

Preheat the broiler. Taste the raspberries and sweeten with the superfine sugar, if necesary. Divide the berries among 6 (6-ounce) ramekins and spoon the sabayon mixture on top of the berries, dividing equally. Place the dishes under the broiler and broil until browned, watching closely so as not to burn. This will only take 15 seconds or so. Remove from the broiler and dust with the powdered sugar. Serve immediately.

This is an amazing dish that blends many strong flavors successfully. Chef Lagasse has a special gift for making apparently incompatible elements completely harmonious. This dish is assertive and complex but not
jarring in its flavors.

To make the barbecue sauce: In a small bowl, combine the ketchup, sugar, water, 1 clove of the garlic, the molasses, sesame oil, ginger, and chili powder. Set aside.

To make the hash, melt the butter in a large nonstick skillet over medium heat. Add the potatoes and sausage and sauté about 12 minutes, until the potatoes are golden brown, tossing occasionally. Stir in the green onions, shallot, stock, and the remaining 2 cloves of garlic. Sauté 3 minutes. Stir in 1/3 cup of the barbecue sauce and heat through. Set aside and keep warm.

Prepare the grill. Brush the salmon fillets with the olive oil and rub with the Creole seasoning. Grill about 6 to 8 minutes or until just opaque throughout, turning once and brushing with some of the reserved barbecue sauce.

To serve, place each salmon fillet on top of a generous serving of hash. Drizzle the salmon with additional barbecue sauce.