An Interview with Mark Miller 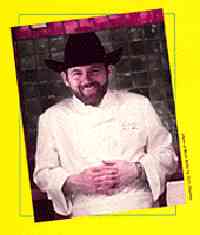 This is a straightforward recipe that also makes a terrific brunch dish. The marinade tenderizes and flavors the meat with its crisp, green, refreshing ingredients.

There's some confusion over the indentity of the poblano (po-BLAH-no) chile. For example, in parts of California, this dark green, thick-fleshed chile is referred to as a "pasilla." (pass-EE-yah) In actuality, the pasilla is a dried chilaca chile (also known as chile negro). As the name suggests, poblano chiles originated in the Puebla region of Mexico, to the southeast of Mexico City. They are probably the antecedent of bell peppers that were developed in Europe after the early explorers took back seeds of various chiles. When they are dried, poblanos are known as either ancho or mulato chiles; both exhibit an interesting range of complex flavor characteristics.

I prefer to use soft Oaxacan (wah-HOCK-an) cheese for the sauce, but if you don't live in Southern Mexico or have a source for it, the semisoft, mild but tangy Danish smoked Havarti is a good alternative. Corn and chile have a natural affinity that has been harnessed for many centuries in Mesoamerica and by Native American of the Southwest, especially in hearty stews. In fact, you can make this recipe into a soup by leaving out the cheese. The sauce also makes a great accompaniment for scrambled eggs or crab. As an option, you can also serve this dish with mustard greens, which add a peppery dimension.

4 single chicken breasts, skin and wing joint still attached
(about 12 ounces each), pre-cut, or cut from 2 chickens
(about 3 1/2 pounds each)

Place all the marinade ingredients in a blender and purée until smooth. Transfer the marinade to a large mixing bowl, add the chicken and coat thoroughly. Let marinate for 6 to 8 hours in the refrigerator.

Prepare the grill. Remove the chicken from the marinade, scrape off any excess marinade, and bring to room temperature. Grill over medium-low heat for 6 to 8 minutes per side, turning often.

Meanwhile, to prepare the sauce, heat the butter in a sauté pan or skillet and sauté the onion over medium heat for 3 to 5 minutes, or until translucent.

Cut the corn kernels from the cob (there should be about 1 1/2 to 2 cups) and set aside. Scrape the cobs with the back of a knife to extract the corn germ and "milk" and reserve. Add the corn kernels and water to the pan with the onions and cook for 2 minutes longer, or until the corn begins to soften.

Add the cream, corn germ, and "milk," and simmer for 1 minute longer. Add the poblano chile and stir in the cheese, in small increments, adding just enough to achieve a thick, saucelike consistency. Be careful not to add too much cheese at a time or the sauce will become stringy. Season with salt and pepper and remove the pan from the heat. Stir in the basil.

Ladle the sauce onto the serving plates and place the chicken on top of the sauce.

Andouille (anh-DOO-ee), one of the famous foods of Louisiana, is smoked, spicy garlic sausage made from pork. It's a Cajun specialty and a primary ingredient in gumbo, but it originated (like a lot of other Cajun foods) in France. A good friend of mine from the San Francisco Bay Area, Bruce Aidells, markets a great andouille, available in many gourmet meat departments of grocery stores under the Aidells label. Paul Prudhomme also markets terrific andouille through his mail-order food company.

Many people don't associate Lousiana with Texas, but the two states are adjacent and southeastern Texas was settled in part by Lousianans. Both states share the rich culinary heritage of the Gulf Coast. There has always been a significant interchange of culinary ideas between Louisiana and Texas, and from there to the rest of the Southwest, and the use of chiles, spices, and seasonings is just one aspect the foods of these regions have in common. This recipe is my homage to Lousiana and its influence on Southwestern cuisine.

Use young, fresh shallots in this recipe as old ones tend to be bitter and too strongly flavored. A good-quality apple cider will also make a significant difference. You can substitute freshly smoked ham or smoked chicken for the duck, but taste it first to make sure it's moist and not over-salted.

In a smoker, or over a low fire covered with soaked wood chips in a barbecue grill, smoke the duck for about 1 hour until medium rare. Let cool and cut into thin slices.

To prepare the vinaigrette, place the cider, canela, clove, and allspice in a saucepan, bring to a boil, and reduce the liquid by half, about 5 minutes. Let cool. Mix in the shallots, sherry vinegar, and sherry. Whisk in the oil and season with salt.

Preheat the oven to 400 degrees. Place the andouille on a baking sheet and roast for 15 minutes. Reserve and keep warm.

In a sauté pan, caramelize the sugar by heating it over high heat until melted and golden brown. Melt the butter into the sugar and add the apples. Toss for 3 minutes, until the apples are coated with the sugar mixture. Transfer to a mixing bowl with the rice, bell pepper, scallion, and pecans. Toss together with half of the vinaigrette.

Arrange the rice salad on serving plates. Slice the andouille on the bias, and place together with the duck slices on and around the salad. Drizzle the remaining vinaigrette over the duck and salad.

Because tomatoes are so strongly associated with the ubiquitous Italian pasta sauce, many people are surprised to learn that tomatoes are native to the New World. Botanically, they're distant relatives of eggplant and tobacco. To me, ripe tomatoes are the essence of summer -- like corn.

Gazpacho originated in Spain, predating the arrival of tomatoes from the New World. Early versions were made with almonds, which were introduced to Spain by the Moors. This style of soup, called white gazpacho (gazpacho blanco), is still popular in Spain today. Nowadays gazpacho is usually made with red tomatoes, but the yellow tomatoes called for in this recipe are sweeter and less acidic. The yellow guëro chiles add a little zing, while enhancing the refreshing, cooling quality of the soup. For more zing, substitute habanero or Scotch bonnet chiles, or a teaspoon of Coyote Cocina's Howlin' Hot Sauce (or another bottled sauce containing Scotch bonnet chiles). The tomatoes and chiles are balanced by the sweetness of the basil and the subtlety of the crab. You can substitute the same amount of shrimp, scallops, or lobster for the crab, or for a vegetarian version, leave out the crab and double the other salsa ingredients. If you like, you can garnish the soup with a drizzle of lemon oil or basil oil.

Place the tomatoes, cucumber, guëros, bell pepper, vinegar and salt in a blender or food processor. Blend until smooth. Add a little water if necessary to thin. Transfer to a bowl and refrigerate for at least 1 hour (it can be
chilled faster by placing in a stainless steel bowl set over ice water).

To prepare the Sweet Pepper Sauce, combine the bell pepper, water, vinegar, sugar, chile powder and salt in a saucepan and cook over high heat until the bell pepper is soft and the liquid is reduced to 1/2 cup, about 10
minutes. Remove from the heat, transfer to a blender or food processor, and purée. Pour into a bowl, cover, and refrigerate.

To serve, heap the crab salsa in the center of a shallow rimmed soup bowls. Carefully pour the soup around; the salsa should be visible above the surface of the soup. Drizzle the sauce around the soup.