The new South Africa comes close to paradise as a travel destination. Breathtaking scenery, a near-perfect climate, superb food and wines, and exciting sporting activities compose an enticing holiday package. Plus this all comes together at an affordable price, often one-half the daily rate of a comparable European sojourn.

What's more, there is a sophisticated, refined European ambiance in the hotels and restaurants amid a charming, warm African culture. True, service is not always perfection and certain areas and neighborhoods are off limits due to crime, but that's typical of many global cities.

Lying at the southernmost tip of Africa, encompassing a vast area of over 1,200,000 square kilometers, South Africa is home to over 40 million people from vastly different cultural societies. To accommodate this diversity, the country now has 11 official languages -- the highest of any country in the world -- although English has been declared the main language of business.

Today, with Nelson Mandela at the helm as president, there exists a genuine sense of pride and euphoric optimism for the country, among all the people, no matter what their politics or living standard. The interesting mix of people and languages, creeds and cultural elements drawn from both the developed and developing worlds, creates a fascinating ambiance and a delectable table.

A holiday in South Africa affords a varied range of activities, from the upscale ambiance of fine Relais and Chateaux hotels to the more informal coziness of bed and breakfast home stays. Shopping centers, craft markets, and roadside flea markets tempt the shopper with local arts and crafts such as Zulu baskets and beadwork jewelry; ethnic silver and costume jewelry; table linens; and wood carvings, salad bowls, and servers. Sporting activities include ballooning, rafting, snorkeling, and a must: the game parks.

If you go, South African Airways has direct flights from Miami and New York several times a week to Cape Town and Johannesburg. The non-stop, overnight flight from Miami to Cape Town takes around 14 hours and the considerate stewardesses aim to keep the traveler happy.

On a March, three-week trip with newspaper food editors from the States, our itinerary commenced in Cape Town with deluxe accommodations at the Lord Charles Hotel in Somerset West. With its majestic Table Mountain and Lion's Head Peak backdrop, Cape Town is a beautiful city. A harmonious blend of architecture dovetails with old Edwardian and Victorian buildings, Cape Dutch homes, and contemporary high rises.

The Victoria and Alfred Waterfront Development is an exciting destination for touring with its extensive shopping mall, craft markets, theaters, aquarium, Maritime Museum, and varied ethnic restaurants in affordable price ranges. Boat trips around the harbor are a popular sideline.

On the edge of the city, the Kirstenbosch Botanical Gardens offer a pastoral setting for a picnic. On a clear day, a five minute cable car ride to the top of Table Mountain affords a spectacular view of the Peninsula. The lower slopes of Signal Hill houses the Bo-Kaap area identified with Malay culture and Muslim mosques.

Opened in 1899, the colonial, five-star Mount Nelson Hotel provides the ultimate in accommodations in its 28 suites and 131 rooms, surrounded by landscaped gardens and pool, in the heart of the city at the base of Table Mountain.

Aboard a big, 42 passenger Inter-Cape Mercedes bus, we traversed the Cape Peninsula, the Wine Route of Stellenbosch, Franschhoek, and Paarl; and the Garden Route of Stilbaai, Mossel Bay, and Oudtshoorn. The countryside is spectacular and the traffic is sparse. Orchards, vineyards, and grain fields thread the landscape in the Western Cape as this is the economic engine for the region. Five million cartons yearly of fresh Cape fruit are sent around the world to 40 countries.

Accommodations are available in charming country inns and homes throughout this region. The Grande Roche Hotel, nestled among vineyards under the Great Paarl Rock, has an outstanding restaurant and 29 elegant suites. A Relaix and Chateau property, it received the Hotel of the Year award in 1996.

Le Quartier Francais Auberge with 17 rooms is a romantic inn in the area at Fransenhoek. The rate of 750 rand for two persons in a lovely king size bedroom includes breakfast and dinner. (Excluding meals, the fee is 595 rand.) 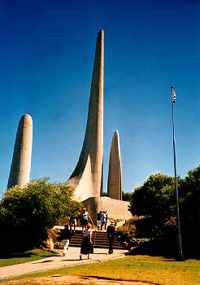 The Huguenot Monument draws visitors on the edge of town. A spectacular site is the Afrikaans Language Monument with its unique sculptural design and top-of-the-mountain viewing area.

Stilbaai is a quiet, gem of a town with a breathtaking sweep of unspoiled shoreline. Tourists swell the population of a few thousand to over 32,000 in January and February, as holiday seekers arrive to enjoy the fishing, musseling, and swimming. The nature preserve is maintained environmentally and requires that private homes be specially-designed with thatch-roofs that blend into the shoreline. The indigenous dune figs are made into a popular scarlet jam.

Visiting an ostrich farm and riding one of these eight-foot-tall birds is a frolicsome pastime enroute. A picturesque town is Mossel Bay with its Shell Museum and Maritime Museum housing a replica of the Portuguese caravelle, a ship that sailed here in 1488. The Old Post Office Tree Guest House provides 29 delightful, twin-bedded rooms just across the road from these sights. The room rate per person is 195 rand in a deluxe room with a buffet breakfast.

From George all ages board the Choo-Tjoe steam train for a 30-minute ride to Wilderness. A bird-watching cruise on the Touw River with Kingfisher Ferry provides a serene early morning or late day activity. Karos Wilderness Hotel with its large suite-style rooms, pool, and extensive breakfast buffet is an ideal respite. The rate is $50 per person with breakfast. A short drive away, the Knynsa Ferry plies the lagoon, serving fresh oysters and local beer to the passengers on a cruise.

A fish braai, or barbecue, at Buffels Cove in Buffels Bay is a choice adventure for dinner. By reservation only, this attracts a group of friends to enjoy a seafood barbecue of freshly caught fish from the estuary, along with mussels, salads, paella, home-made bread, and dessert, all for 45 rand or about $11 per person.

In George, Fancourt Hotel and Country Club Estate is a premier, 27-hole golf and leisure resort with a health and beauty pavilion, pools, and conference center. Accommodations include rooms in the historic manor house, garden suites, or studios. Croquet, volley ball, and trips to nearby beaches are scheduled. Four restaurants offer varied dining.

We took in the scenic splendor of Plettenberg Bay, the Knysna Heads viewpoint, and the Tsitskamma National Park, with gorges, waterfalls, and wild flowers. We were enroute to an overnight at the five-star Shamwari Game Reserve. The stay included exciting dusk-and-dawn game drives, a bountiful boma dinner by firelight, and accommodations that ranged from deluxe rooms in the manor house or nearby cottages to a lodge half-an-hour away.

From the sparkling bay city of Port Elizabeth we flew to Durban and there enjoyed the regal ambiance of the five-star Royal Hotel with its spectacular Royal Grill and a tour of the William Campbell Afrikaner Museum and the Victoria Street Market, a good place to bargain for necklaces and Zulu baskets. Le St. Geran Club Room is a find for a superb French dining. The menu features a delicious crab soup or mushrooms stuffed with prawns, succulent rack of lamb or barracuda with prawns and basmati rice, and creme brulee or cherries and ice cream in liqueur. The three course menu runs $22 per person.

A flight to Jo-burg and a stay in Sandown afforded an elite five course dinner at Chez Patrice in the Balalaika Hotel and Crown Court, adjacent to an upscale shopping center. 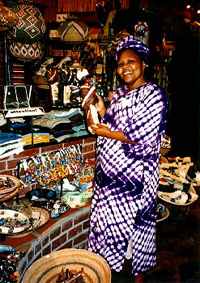 Shanty townships have sprouted on the outskirts of the cities and towns as people have migrated from the countryside to the cities to seek work. An empty field mushrooms into thousands of shacks almost overnight, and the conditions are primitive. The government continually aims to upgrade the shanties by installing water and electricity hook-ups. Some townships are singled-out as models and financial assistance is given to build better real homes and create jobs for the people. The population hopes that tourism will provide service jobs for the people. Yet unemployment remains high -- some say 40 percent.

A delightful dinner and overnight at the exemplary Coach House in the magnificent North Province preludes a two night stay at Sabi Sabi, a prime game hostelry within Kruger National Park. Enroute, a Bush Buffet lunch by Karos Lodge afforded a view of their fine accommodations alongside the Sabie River at Kruger Gate. Priced at 325 rand per person, daily, for three meals and an air-conditioned double room, a stay there runs considerably less than a private game park. A game drive can be added for 295 rand.

Sabi Sabi affords deluxe accommodations in three lodges. At Bush Lodge, thatched chalets and luxury suites in ethnic African style provide air-conditioned accommodations between the break-of-day and sunset drives in the bush. With our ranger, Keith Macvicar, six of us took off in an open Land Rover with a Shangaan tracker. With luck, we partook in a leopard kill, watched a herd of elephants strip bark from trees, saw a pair of lions and their twin cubs at a distance of 10 feet, almost rubbed noses with rhinoceros five feet away, and observed a quintet of graceful giraffes. Boma dining under the stars and bountiful buffets brunches, and lunches enhanced the stay. The rate tallies about $400 a day per person in a suite with meals and two game rides.

The charm of the Courtyard Inn in Arcadia, Pretoria, and the thatched cottages at the Mount Grace Country House on a hillside in Parklands nearby afforded a restful finale before the long flight home.

Throughout, the people we met in the food and wine industries and the hotel and restaurant fields were an extraordinary delight. Refined and sophisticated, they offer an upbeat attitude for the new South Africa.

Lou Seibert Pappas is a freelance writer and author of more than thirty titles including: Pizzettes, Crepes & Greek Cooking.