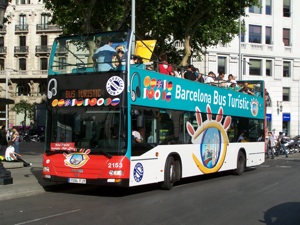 How many times have you arrived on vacation in a new city, jetlagged from hours of flying or dead-tired from driving unfamiliar roads? Maybe you just want to check into a hotel and hunker down until you feel like setting out to explore your strange surroundings. But when you are ready to venture forth, there are so many things to see that you don't know where to begin.

I like to start by taking a bus tour of the city, to get my bearings and give me an idea of which places I might want to explore further. Many major European cities have special "city tour" buses whose routes are designed to provide an overview of the major sights. Some of these bus tours allow you to get off at designated stops, explore on your own, then re-board another bus at a later time at any stop along the route. Most have multilingual recordings that describe the important landmarks, and the best of them include a bit of historical background and information about local festivals and customs.

In some cities, bus tours are offered by the local tourist office, as well as by private tour companies that compete with them. So it's important to find the tour that best suits your own interests and budget. Many times, the official tours operated by the city's tourist office are less expensive than those on privately-owned tour-bus lines.

Barcelona, the capital of Spain's Catalonia province, has an excellent Barcelona Bus Turístic program run by the municipal tourism organization. The hop on hop off Barcelona buses, open on the upper level, follow three separate, color-coded routes. Each route covers a different part of the city, with brief stops for boarding or leaving the bus at a total of 44 points of interest. In addition to a route map, you get a set of earbuds for listening to the recorded audio guide on the bus, available in 10 languages, which provides historical and cultural information about the sights along the way, short musical segments, and current information about local holidays and special events. These are also the only buses with official Turisme de Barcelona guides on board, to answer your specific questions. 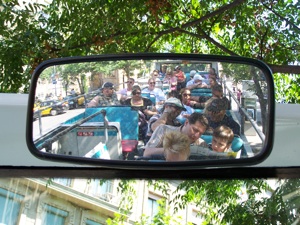 Starting at the centrally located Plaza de Catalunya, the Red Route introduces you to the northern part of the city, with stops at major landmarks such as Antoni Gaudí's modernist Sagrada Familia basilica and whimsical Park Güell. You can get off at the Park de Lo Tamarita stop and take the little 100-year-old Tramvia Blau (blue streetcar) to the funicular railway station, which carries you all the way up to the top of Mount Tibidabo and Barcelona's big amusement park, with spectacular views over the city. Return to the Bus Turístic stop below and continue your tour all the way back to Plaza de Catalunya.

There you can catch the Blue Route bus that covers the western, southern, and central parts of Barcelona. A popular stop along the way is Poble Espanyol, a mock village built for the 1929 World's Fair, showcasing the different architectural styles of Spain's regions and featuring restaurants, souvenir shops, and craft demonstrations. Continue by bus up the Montjuïc hill to the National Museum of Catalan Art, which houses an outstanding collection of Romanesque and Gothic art.

At the Telefèric de Montjuïc stop you can catch an aerial cable car for a dramatic ride (one way or round trip) in an enclosed gondola down to Barcelona's port. Or continue downhill by bus to Port Vell. Hop off at the Colon-Maritím Museu stop and take an elevator to the top of the tall column commemorating Christopher Columbus, for a great view of the city and the port. Then follow the Blue Route out to the Olympic port, before looping back through the old central part of the city and back to Plaza de Catalunya.

Both the Red Route and the Blue Route operate year round, and the journey on each takes about two hours, if you don't get off for sightseeing. At Port Olímpic, on the waterfront, you can also board the Green Route buses, which run from April through September. The 40-minute round trip takes you along the beaches and through the old part of Barcelona that was urbanly renewed for the Olympic Games there in 1992.

Tickets for adults cost €21 for one day, or €27 for two consecutive days; children's tickets are €13 or €17. Tickets can be purchased at the Barcelona Tourist Information Office, Plaza de Catalunya 17 (underneath the busy square); at bookstores and newsstands; online; and on any bus the first time you board. You'll also receive a book of coupons for discounts (good for the entire year) totaling €180 at selected museums, restaurants, and shops, including a 10% discount on guidebooks and souvenirs bought at the Tourist Information Office.

TIPS:
● Mondays and holidays are especially good times for taking these tours, since many of the shops and museums are closed on those days.

● Buy a two-day ticket and spend the first day riding the entire Red Route in the morning, followed by the Blue and Green Routes in the afternoon. Then use the next day's ticket for transportation to the particular sights you want to explore further.

● You don't have to go all the way to the Plaza de Catalunya to start the tour. You can board the bus (and buy a ticket on board) at any of the designated stops on all the routes, so choose the bus stop closest to your Barcelona hotel.

● Sit on the open top deck for the best views. But take along a hat that won't blow off, because it can be hot, sunny, and windy up there.