saab biopower all the way to cringletie house in scotland

The River Tweed is one of the great salmon rivers of Scotland.  On its journey to the sea at Berwick upon Tweed it runs past an impressive line up of fine country houses and estates, from great castles like Floors in Kelso to smaller and more humble farmhouses like St Cuthbert’s at Cornhill.

Driving up or down the river valley is a great treat.   Around every corner there is a pretty scene, a glimpse of the river perhaps through ancient beech or oak trees and many of those lovely houses slip into view.

One of them sits at the upper end of the Tweed valley near Peebles.   It is called Cringletie House.   We had been given a Saab Vector Bio-Power Sport with a two litre engine to try out, the idea being that we would fill it up with lovely, renewable bioethanol, giving us even more power while substantially saving on our fossil fuel CO2 emissions, the only trouble being the nearest bioethanol pump was sixty miles away!

So, making do with petrol, we set off.   Bioethanol is something of a buzz word in green motoring and it is fair to say that Saab is at the forefront of this trend.   However, it is also fair to say that biofuels do not get a good press.   There have been at least two official reports casting serious doubts on just how green the fuel is because if there is a widespread conversion to plant-based fuels the production of it would increase rather than decrease the output of greenhouse gas while at the same time driving up food costs and depriving the poor throughout the world of food. 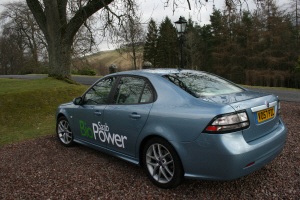 Bioethanol, which substitutes for petrol, comes from such crops as sugar cane, beet, maize and wheat.   Bio diesel comes from oily crops like rape, soy and palm and that does no better in terms of saving the planet because rain forests in Indonesia and Malaya are being destroyed to make way for soy and palm crops.

Put all this to the Swedes though and you get a different story.  They aim to be independent of fossil fuels by 2020 and along the way they are offering their drivers a whole range of cash incentives to use biofuel.

Meanwhile looking at this car without its bio tag we rather liked it.  There is a wide range of engine sizes including three turbocharged 2.0 litre units and three diesels, not to mention the two biopower engines.

Saab does, of course, compete with BMW and Audi and nine times out of ten it loses out to the Germans.   However, we defy you to find a nicer cabin layout.   The seats are super comfortable with plenty of adjustment and the dash has a lovely clean look with crystal clear instrumentation.

A large boot (trunk) leaves plenty of space for luggage and as we headed towards our destination the cars sporty suspension made for a pleasant, reassuring ride.

From the moment we swept into the driveway there is no denying the beauty of Cringletie.   The spring bulbs are a sensation here and then you catch that first glimpse of the house with its pink stone and baronial air.   There are towers and turrets too; just what a country house hotel should be.

Was it warm and cosy?   Yes and no wonder.  The first house built here was in 1666 but it was replaced in the middle of the nineteenth century and it remained a private house for the next 100 years or so until 1971.   Then it became a remarkable country house hotel owned by the Maguire family who were famous for their hospitality and Sunday lunches.   They had an extensive walled garden with a talented head gardener who supplied endless food for the kitchen.   But when the Maguires retired and sold out it went down hill until Jacob and Johanna van Houdt bought it and over the last few years they have done much to turn the hotel’s clock back as they valiantly work on the walled garden to restore it and use as much fresh fruit and vegetables as they can.

Manager Jeremy Osborne looked after us in great style and as we gobbled our way through a delicious dinner in the company of our two friends Alan and Julie Reid who had joined us from their own small hotel nearby called Windlestraw Lodge, we knew we had chalked up yet another find.

Our drive home gave us a chance to take advantage of the excellent  equipment levels in the car such as dual-zone climate control, leather steering wheel, electric windows, a CD player and cruise control.   There are twin front, side and curtain airbags too.

All in all no grumbles so hats off to Saab and Cringletie.