Here's the scenario: 21 East Coast college students, 2 teachers and their befriended bus driver Yanni trekked across Greece for a month of classical studies. This Duke study abroad trip was led by Duke professors John Younger and Paul Rehak: highly-regarded experts in the field of archaelogical studies. We were not only provided with two of the best guides of Greece, but also their positive outlooks and liberal attitudes made for unforgettable adventures. 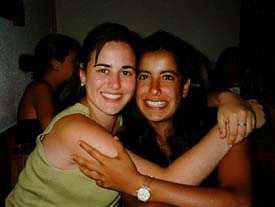 We had been forewarned about toilets that did not flush, massive infestation of bugs in our living quarters, showers that sprayed water in every direction except on you and food that was drowned in olive oil. So when we arrived in Athens at our first hotel, the Titania, we were relatively surprised to find clean bathrooms with hair dryers, good plumbing and cable TV including two pay-per-view pornography channels. This was really no different than the accomodations we would find in the United States! And the rooftop bar with an incredible view of the Acrop0olis and Lukavittos was an added bonus. Another surprise was the lobby filled with the Miss Tourism of the World 1998 pageant finalists. For some reason the boys used more film that day than any other?

Slowly the group dynamics became clear. There were those that studied the ancient sites with extra care, those looking to experience the Moder Greek culture, and those hoping for fun and a possible Greek fling. All in all, Athens was very modern in the Western sense of comfort and convienence. One ca find everything there from Greek taverns to McDonal's and international brand name stores to street vendors selling freshly baked local goods. English was spoken by nearly all. After a couple of days of site seeing and becoming acclimated, we journeyed southwest to the city of Nafplion. 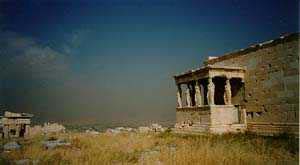 It was here that our teacher's initial warnings about lesser-developed sides of Greece rang true. Soon though, we got used to standing in plastic basins for a shower and toilets you had to flush several times. But we were happy to trade our creature comforts for the quaint town and gorgeous views. At nightwe gound ourselves seated by the water at local cafes. It was here that many of us had our first experiences with Greek alcohol. Our first warning is that unlesss you have a deep love for licorice, don't go near the Ouzo. The Greeks joked about drinking it morning, noon and night, but we barely managed to sip it diluted with water. Another Greek favorite is Retsina, but our American taste buds found it equal to cheap, cheap wine. Instead we preferred to pay the higher prices for mixed drinks like Fruit Punch with alcohol and Blue Lagoon. In termsof beer, though, people seemed to prefer the Greek's Mythos over the usual Heineken. The 21st birthday of one student was fun, but didn't have the same thrill as in the U.S. as there is no age limit on drinking in Greece.

We packed our bags again and left for Sparta. We were given a conplete presentation onthe famous ancient Spartan miliary organization. These soldiers were known for their dedicatoin and strength like no others from their time period. Leaving the ancient sites later that afternoon we finally came into contact with the present day inhabitants of the city. We thought Sparta may be a bit of a militant city, but we had to laugh at ourselves when we saw that too much Baklava and Souvlaki had taken the edge off these descendents.

The first night, by recommendation of our teachers, we headed to a nearby square to watch the ancient ritual of volting. We sat down to our nightcaps to see what was supposed to consist of families walking back and forth with their unwed children to scout for possible matches. Instead we were a disappointed audience to several old men gossiping and walking with eachother.

It wasn't until the following night that we found out where the real action was. Marriage arrangements have evolved to a more American style of bar hopping. We speant the evening at the Ministry of Music. The owner of the bar joined our group and we found him to be, like most Greeks, very hospitable. Two girls ended up accompanying him to a Greek dance club after the rest of the group had retired for the evening. Rumor is that one of the girls got the Greek romance she had been looking for.

From Sparta we left for Olympia; home of the original Olympics. Already there are several "Athens 2004" items for sale preparing tourists for the pending Olympic games. Olympia has a very interesting history worth the research time of every tourist. The other major draws to Olympia are the exceptional deals on leather goods and gold jewelry. Several from our froup left Olympia very pleased with our purchases.

Our next stop was in Delphi. The city maing consisted of three parallel roads with the same shops and restaurants to which we had become accustomed. At first we didn't expect much, but Delphi came to be one of our favorite towns. The view from our hotel balconies was incredible, to say the least. Every night we were guaranteed a perfect sunset. The classical studies sites were of great interest including the famous Oracle at Delphi. Another birthday was celebrated so most of our group headed out for a little hell-raising at a dance club called Delphi by Night. By this point in the trip we were in need of a little American dance music, smoke, and flashing lights. Another highlight of Delphi was the three-hour hike our teacher led us on. It started with a picnic outside of a cave. We hiked over the mountains, through a herd of cows and past a goat farm to descend upon the city. It was amazing that for much of the route we were using the same paths as the Ancient Romans. Delphi was truly a beautiful city. 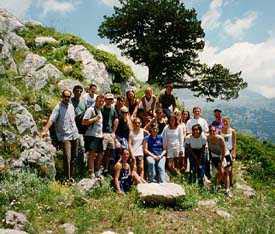 We returned to Athens for a few days, but were soon off for the island of Mykonos. The Greek Islands are an absolute joy. For the sun worshippers in the group there couldn't have been a more inspirational sight than a sign we saw pointing to the red sand, white sand and black sand beaches. The island exposed us to so many difficuly decisions! Our other dilemmas included what type of Crepe to order, which dance club to hit first, and in which store to shop. Needless to say, the views were always a delight!

Most days were a complete joy. We hiked a volcano, rented cars to reach the best beaches, explored the ancient ruins of Delos, checked email in Santorini, swam in the Sulfur Springs, enjoyed each other's company over tzatziki and some of us even joined the Greeks on their nude beaches. The Greek Islands are a true vacationer's delight.

Our time in paradise came to an end and this meant our trip was coming to a close. We had a few more days in Athens, but by this time we were no longer as excited to explore Athens' dirty streets, feed the hundreds of homeless cats, or bargain on prices when we knew we were being ripped off anyway. Our main concern was finding the right gifts for friends and family back home.

Our last two horrahs were the National Museum and our farewell dinner. We went to a special restaurant, which not only served the best Moussaka of the trip, but also had Greek dancing and music on stage. And in the true Greek tradition many of the audience members found themselves on that stage. The room simply came alive with a spirit that could only be created in Greece. It was the perfect way to end our trip. Greece was home to us for a month and we will miss not only its beauty and culture, but also the heart and soul it shared with us. We definitely look forward to one day visiting Greece again.

Peel the eggplants and cut them into 1/2" thick slices. Brown the slices in the 4 tbs. butter. Drain on paper towel and set aside.

Heat 4 tbs. butter in a skillet and cook onions until brown. Add the ground meat and cook 10 minutes. Combine the tomato paste with the wine, parsley, cinnamon, salt and pepper. Stir this mixture into the meat and simmer over low heat, stirring frequently, until most of the liquid has been absorbed, about 30 minutes.

Make a bechamel sauce by melting 4 tbs. butter and blending in the flour, stirring with a wire whisk. Bring the milk almost to a boil and add it gradually to the butter-flour mixture, stirring constantly. When the mixture is thickened and smooth, remove it from the heat. Cool slightly and stir in the beaten eggs, nutmeg and ricotta cheese.

Grease a 13"x9"x2" pan and sprinkle the bottom lightly with bread crumbs. Arrange alternate layers of eggplant and meat in the pan, sprinkling each layer with Parmesan cheese and bread crumbs. Pour the bechamel sauce over the top and bake at 375 degrees F. for an hour, or until the top is golden brown. Cut into squares to serve.

This recipe can be made in advance and reheated.

Place the meat in the bowl. Mix together the lemon juice, oil, salt, pepper, oregano, garlic, and grated onion and pour over the meat. Cover and chill several hours or preferably overnight, turning several times. Thread the meat on skewes alternating on each one about 4 to 5 lamb cubes, 2 pieces of pepper, and 1 piece of onion. Barbecue over medium-hot coals, basting often with marinade and turning to brown on all sides, allowing about 15 minutes for medium-rare meat.