TRAVELING TO FARLAM HALL IN ENGLAND IN A MAZDA RX8

A Cumbrian full moon lit up the frosted rooftops of the manor house as we twisted up the driveway and drew up to the front door in our gleaming white Mazda RX8.   No sooner had we turned off the Wankel rotary engine (the only one of its type in any production car) than our hosts were out to greet us and gather up our luggage like long lost friends.   A roaring coal fire lit up the sitting room and after being shown to our room we were not long in coming down to sit before it with a cup of tea and delicious home made biscuits and fruit cake.

We had arrived at Farlam Hall in Brampton.   The journey from our home in Berwick which lies on the east coast of Northumberland had given us a chance to put the RX through its paces.   Straight roads and winding country lanes would lay bare any particular niggles with the car and so far we had none.   Other than getting out which, as you get older, seems to get harder and harder, especially if you happen to have a dodgy back.   Never mind we now adopt a rolling approach to exiting the seats of sports cars and it seems to work. 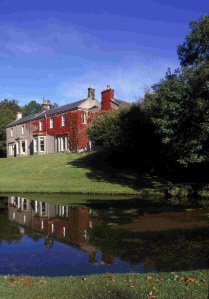 The manor of Farlam goes back to 1428 with a house appearing around 1579.  To this early building various extensions were added, the last being in 1860, to create an elegant Victorian home for the wealthy Thompson family.   They were friends of George Stephenson, inventor of the first steam engine which became The Rocket and it won a small fortune of $753 in 1829 for being the best steam locomotive in the world.   Later the Thompsons bought the incredible machine and ran it on the local line until they magnanimously presented it to the Science Museum in Newcastle in 1862.

Fast forward a little and thirty five years ago the Quinions purchased Farlam.   It was something of a gamble, for it was in a parlous state of repair and it was occupied by squatters.      Undeterred Ma and Pa Quinion took the whole house in hand and turned it into one of the stalwarts of the prestigious Relais & Chateaux group of hotels in England.   It truly is a family affair with son Barry as head chef and his wife Lynne working in front of house along with a daughter Helen and her husband Alistair Stevenson who is general manager.   It sounds complicated and you have to wonder how on earth all six of them don’t end up rowing with each other and falling out!  But remarkably, they never do and undoubtedly the strength of the hotel has much to do with the fact that Farlam is all about family and their pride and joy - the hotel they have created over the last three and a half decades.

From our large, comfortable bedroom we made our way back to the sitting room and that fire again and sank into a large settee with a glass of champagne.    Lynne was waiting at the bottom of the stairs to greet us again and on hand to escort us to our table (a very nice touch) which was smothered in crisp white linen and impeccably laid.   As we perused the menu we knew that Barry, who was in charge of the kitchen, had gone to considerable lengths to find the best of local ingredients which included fish, meat and game from Cumbria and Northumberland.   In our case we chose a wild mushroom soup with white truffle oil and smoked prawns to start with followed by fillet of halibut and a medallion of local beef fillet.   It was excellent.   With a cheese board of local cheeses followed by a delicious pudding and then coffee, or a choice of teas, the whole meal was a snip at at £35/$53 per head including VAT.

The next morning after a superb breakfast we set off to explore the countryside around Farlam.   A picnic of sandwiches and fruit cake, and hot coffee went comfortably into the trunk of the Mazda along with our other bits and pieces, boots for walking and waterproof coats just in case the heavens opened.   But of course we did have those little back seats to use and the dinky back doors that open backwards allowed us to get at them without straining our backs.   And yes you can also fit a couple of passengers in there as well.   The Cumbrian fells never looked better.   Close by the Roman Wall beckoned and one of the straightest roads to be found anywhere but with quite a few hidden dips and rises.   Known locally as the Roman Road it would be a good test for the car.

Heading south with the 2000 year old Wall popping into view from time to time we sent the unique rotary engine loose.   For more than forty years and two million cars later Mazda has been developing this remarkable engine.   They have won the Le Mans twenty four hour race with it and there is no doubt of its utter reliability.   It is also fantastically smooth delivering in the RX an amazing 231 bhp from its 1300 cc engine as it sends its power to the rear wheels which in turn beautifully balances the car.

We flicked through the six speed gearbox, eating up the miles, charging the hills and descending into the dips of this ancient but fast road, knowing that the likes of dynamic stability control anti-lock braking and its low centre of gravity was working with us, preventing wheel spin and keeping perfect traction.   With 0-62 mph in 6.4 seconds and a top speed of 146 mph its performance speaks for itself.   Snug Recaro seats (surprisingly good for the back) a neat cabin layout completed an almost perfect picture.   We loved its beefy looks and put up with a combined fuel consumption of 24 mpg.  It is undoubtedly one of the best sports coupes out there and, for the money; you get a great deal of car.   A bit like Farlam Hall really.