Gites de France: Holidays on the Farm in France 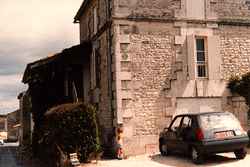 Forget Paris? No, it's still the planet's most elegant, sophisticated and grand city. But if you want to get to know what the French call "la France profonde," Paris is not the place to find it.

What is "la France profonde?" Think of it as the profound bedrock of France, of a simpler place and time that we are all missing in our lives. The ancient , peasant past is stirring in every French heart and there is nothing more desirable for the French than owning a little country retreat that allows communion with the earth, to have roots in the soil, which is such an important part of the notion of "la France profonde."

If you are a regular mortal and your resume doesn't read "...s/he divides his/her time between New York City and a house in the South of France," how are you ever going to unlock the secrets of the profundity of France? I think I have just the thing for you. But be forewarned. I am not talking about traveling through France by TGV (high speed trains), staying at country retreats that feature pools and tennis courts, and dining at three-star restaurants where you are going to end up being the proverbial fool who is quickly separated from his money. There is indeed a mode of accommodation in France that allows you to explore in depth a favorite region in France. It is called "les gites de France," which literally translated means "the shelters of France."

Let's quickly delve into a bit of history. After World War II, even the peasants of France finally had to give in to the inexorable march of progress and they were forced by economic pressures to abandon their small land holdings as they abandoned the countryside in droves. Southern peasants headed for industrial cities like Lyon, Clermont-Ferrand, and Toulouse. Many villages and small towns that I saw in the late 1960s and early 1970s in the South of France looked almost like ghost towns. You could have picked up a nice stone house for the price you now have to pay for an upscale mountain bike. But don't start fantasizing about your own house in Provence. These little gems have by now all been picked up and yuppified by Parisians searching for their roots, and by wealthy Northern Europeans who are looking for fun in the southern sun.

In an effort to help the rural population all across France, and in order to preserve housing stock, the French government initiated a program to promote tourism in rural areas by giving owners low interest loans to modernize houses or flats that were no longer used. Once these dwellings met certain basic standards of sanitation (running hot and cold water, flush toilets) and the owners had installed modern conveniences (gas or electric stoves, refrigerator), they would register the gite with the local authorities, who in turn would print all the germane information in a guide book of gites for a particular area of France. Not to worry, you don't have to do endless research to find your dream gite. A clever company in Britain publishes a yearly digest with descriptions and photographs of gites from every corner of France (see details at the end of this article).

Renting a gite means you are not going to be on the Cote d'Azur or at other high powered places where everybody else wants to go, but you may not be too far from them either. Hosts of accommodations near the tourist hot spots can get much more money than the gite owners, whose rates are much lower in order to attract people to their more remote and less glamorous locations. My family and I have used gites to explore some of our favorite wine areas of France such as Bordeaux, Burgundy, Provence, and Alsace.

Also be aware that you are not going to be put up in luxury accommodations. Most gites that I have encountered looked more like the repositories of the family furniture from right after World War II than anything else. My wife usually has an anxiety attack when we first reach our destination, whereas I feel blissfully transported back to certain style elements that I remember from my own childhood (which I spent in Europe). And let's not forget the lumpy mattresses. But after a strenuous day in the field, visiting wineries and sampling the local charcuteries, you will feel like a lump yourself and peacefully fall asleep in the quietness of the French countryside.

How do you get your very own gite? The trick is to get your reservation in early since Europeans are well aware of the low prices and charms of the gites. If you are planning to go in the off season this should not be a problem. At any rate, it has been my experience that it is not wise to rely on the mail. You are going to send your letter by airmail but there is no guarantee that the person on the other end has got the savvy to respond by airmail. It is best to telephone to make your arrangements either directly with the owner or the local booking service. The guide book indicates whether the other party speaks English. The booking service will also recommend other gites in the area, in case your choice has already been booked. If no English is spoken you should have a good command of French. If you don't, have a friend call for you who does. At any rate, the Guide covers all the details you need to be aware off. If you are forced to go during the height of the tourist season, the latest you could hope to book would be March. Ideally, you would fly to Paris, spend some time there, get your rental car for which you have made arrangements through an American travel agency, and head for your gite in the countryside. Bonne chance - bonne route, as the French say.

We had our gite experiences when our daughter was one and a half and three and a half years old and she seemed to be able to make friends everywhere we went. The adventurous thing about using gites is the element of surprise. You never know what the family you are renting from is going to be like, or who you are going to hook up with in the village or small town in which you will be staying.

In Burgundy, our gite was a charmer located in Gevrey-Chambertin, overlooking the premier crus vineyard of Lavaux St.Jacques of which I had several bottles in my cellar at home. The possibilities for wine, food, and culture mavens are truly staggering. In Provence, we stayed in an old town house in the small town of Peyrolles (we referred to it as payroll), which is close to Aix-en-Provence and many of the other exciting sites that the South of France has to offer. From there we visited wineries in Bandol and Chateau Vignelaure with its great wines and wonderful art collection. Cassis near Marseilles on the Mediterranean coast presented itself as the quintessence of a small southern port. It is nestled against steeply rising vineyards which produce the fragrant white wines that are a perfect foil for the bouillabaisse served in the local restaurants.

Our neighbors in Peyrolles were incredibly helpful and sweet. A bachelor who lived two doors away from us provided us with wonderful honey from his bee hives in the lavender fields. He also made sure that we would always have a parking space right in front of our house when we returned from our frequent excursions. One day Peyrolles had a fÍte which created a parking problem on our street. When he saw me approaching, he told me to follow him, and he jogged to a nearby spot that he had kept open for us.

Two years later I again had the Bordeaux bug and I wanted to visit the vineyards and chateaux. We could not find anything in the Bordeaux area itself and so ended up renting a gite for two weeks in a tiny hamlet in the Cognac area, still within easy traveling distance of the Bordeaux wineries. Midway to our destination we stayed overnight in a small town in the Massif Central and in the morning after taking my shower I massively threw out my back. The owner of the hotel allowed us to move into a more expensive room with a big bathtub for the rest of the morning, so I could soothe my back in the hot water.

As soon as I felt better we packed up and continued in the direction of Cognac. When we finally got to our gite my body had assumed the shape of the car seat. After this inauspicious beginning, things started to look up. Monsieur Bourrion, a widower and our host, was a Cognac producer and our rooms were on top of his chais (cellar) which was crammed with Cognac vats of various vintages. We received a tour and tasted his precious brandies, some of which were over half a century old and had been distilled by his grandfather. Monsieur Bourrion lived by himself and enjoyed visiting with us in his kitchen. This invariably meant tasting more Cognac, talking about the Cognac trade, and reminiscing about his World War II experiences of joining the forces of General de Gaulle and helping to liberate France from Germany.

Our outings took us to some of the major chateaux of the Medoc, St.Emilion, and Pomerol. Latour, Lynch-Bages, Mouton-Rothschild, Ausone, and Cheval Blanc were all on the agenda. Speak to a wine merchant if you intend to visit the Bordeaux estates. Normally, you can't just drop by. Other days were spent exploring the estuary of the Gironde river and the family resorts that front the Atlantic Ocean. In our own backyard were the famous Cognac producers whose names are known around the world. The lovely countryside with its rolling hill vineyards stretched from our windows as far as the eye could see. Crisscrossing the countryside, we discovered streams with swimming holes, where the locals congregate, and country inns with wonderful regional food. My artist wife, after overcoming her trepidation upon arrival, opened up to this wonderful land and produced some of the most successful artistic images of her career. Who knows, the duck with green peppercorn sauce in one of the country inns just might have had something to do with her rising spirits.

This is all waiting for you if you are willing to take the plunge. Get off the beaten track and into your own gite. Bonne chance!

For more information on gites:

Fodor's Rivages, Hotels and Country Inns of Character and Charm in France (3rd Edition) at: