Many of us got our first taste of European travel when we were college students, lugging backpacks across the Continent, eating in cheap restaurants, and staying in youth hostels. But after we graduated and found jobs back home, we later returned to Europe with more money in our pockets and more sophisticated tastes.

Other Americans' first trip to Europe was on one of those "if-it's-Tuesday-it-must-be-Belgium" whirlwind tours, where you're in London one day, Paris the next, and off to Rome the following morning. But after we became older, wiser, and more experienced at traveling, we realized the value of spending our vacations in only one city or region, with enough time to learn more about the place and to appreciate its subtle pleasures.

Now, many vacationers plan their holidays around one luxury hotel, where they can reside in comfort for a week or two, play golf, be pampered at a spa, and only venture forth to see the surrounding area when the spirit moves them.  That's the idea behind "destination hotels," which offer superb service and cater to their guests' many desires, whether that means taking tennis or skiing lessons, dining in a choice of high-level restaurants on site, having a full cosmetic makeover, helicoptering over the landscape, joining a rock-climbing expedition, riding mountain bikes, or just relaxing around the pool.

I recently stayed in two 5-star hotels in Catalonia, the region of northeastern Spain next to the French border. One of those hotels was in the bustling capital of Barcelona, the other out in the countryside near Tarragona. Both offered excellent amenities within two very different contexts, urban and rural and both easily accessible using car hire Spain.

The Hotel Claris in Barcelona is a Five Star Grand Luxe Hotel, rated by Travel + Leisure magazine in 2008 as one the top 500 hotels in the world. Centrally located in the city, it's housed in the old Vedruna Palace, dating from 1892. But the hotel, which opened in 1992, has 120 totally modern rooms; an interior, glass-enclosed elevator; and one of the most important private collections of ancient Egyptian art in Spain, as well as other treasures ranging from Hindu textiles to original Andy Warhol prints. On the rooftop terrace, which has great views over the city, you can swim in the pool, snooze in a comfortable lounge chair, or dine and dance at La Terraza Restaurant-Bar in the evening. The hotel also features two other restaurants known for their fine cuisine. 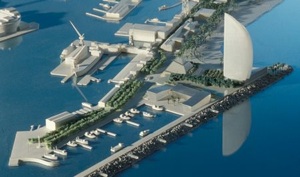 The second largest city in Spain, Barcelona boasts sixteen 5-star hotels, including the ultramodern Hotel Arts Barcelona and the new, sail-shaped W Barcelona (opening in October 2009), both in prime locations on the waterfront. Since Barcelona is a popular port where many Mediterranean cruises begin or end, you might want to extend your vacation before or after the cruise by spending a few extra days in one of these destination luxury hotels. 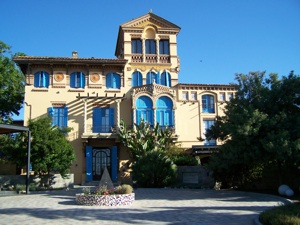 For a completely different experience, still at the same 5-star level, try the lovely Hotel Mas Passamaner, a small, 26-room luxury hotel in a historic country house dating from 1922. Originally designed in the Catalan Modernist style by the famous architect Lluís Domènech i Montaner, the three-story building was renovated in 2001, retaining the cozy character of the early 20th-century edifice and adding whimsical contemporary touches that complement the older decor. Located 3 kilometers from the medieval village of La Selva del Camp, near Tarragona, the Mas Passamaner is surrounded by gardens and trees, and features a pool and spa, as well as tennis courts, archery, and other outdoor sports. Its very good restaurant La Gigantea is run by an award-winning German chef who also owns Michelin-starred restaurants elsewhere in Spain and Portugal.

In the northern part of Catalonia, the 5-star Hotel Peralada is located in the quiet countryside between the town of Figueres and the picturesque fishing port of Cadaqués on the Costa Brava. Many of its 55 modern rooms overlook the golf course, which is one of the hotel's special attractions. In addition to two dining areas and two bars, it offers a wine spa with skin treatments using wine and other grape products. Nearby places of interest include the medieval village of Peralada with its 14th-century castle, part of which houses an elegant casino, and the castle park, site of an international music festival in July and August.

You don't have to be a millionaire to stay in one of these luxury hotels. Many of them offer special room rates and packages throughout the year, especially to attract tourists during low seasons for travel. For €169 per night during low season (€210 in high season), the Hotel Claris in Barcelona offers two consecutive nights in a double room, including breakfast, a bottle of Spanish red wine, parking, and the use of a Mercedes Smart Car for half a day. All hotel guests, regardless of when they stay there, also get a free pass (worth €11 per ticket) at the nearby Egyptian Museum of Barcelona.  And in recognition of the current economic situation, the Hotel Mas Passamaner has a special "2009 Anti-Crisis" package, available on certain dates, costing €85 per person for one night in a double room, with breakfast and the use of the spa wellness area. Both are good bargains for such luxury-class accommodations.