Bread, wine, and olive oil, some sausages and fish to eat with it, all followed by rich, dark chocolates for dessert.  Who could resist a meal like that?  In Catalonia, one of the finest culinary regions of Spain, you can feast on all these products, locally produced in many of the cities, towns, and villages from the sunny Mediterranean seacoast up to the high mountains of the Pyrenees. If you want to experience this great region, consider All Inclusive Holidays in Spain.

You'll appreciate the foods even more when you know something about their history and development in this northeastern part of Spain. Catalonia (Catalunya in the Catalan language) boasts several fascinating museums devoted to documenting the culinary history of specific products and exhibiting artifacts related to their production.

Start with bread, the staff of life. To make bread, you need some kind of grain, ground into meal or flour so it can be combined with other ingredients before baking. The Flour Mill Eco-Museum (Ecomuseu-La Farinera) in Castellò d'Empúries features a water-powered flour mill housed in a medieval building, with milling equipment from the late 19th and early 20th centuries. Exhibits cover the history of wheat from Neolithic times to the present, and how people have turned wheat into flour at different times in the past. Castellò d'Empúries is located in the county of Alt Empordà, north of Barcelona, 9 miles east of the city of Figueres.  There's also a small flour-mill museum in the village of Montferrer, in the northwestern county of L'Alt Urgell, with machinery from the turn of the last century, run by early hydroelectric power.

Now you need some olive oil to dip that bread in. Although it produces only 4% of the olive oil in Spain, Catalonia is well known for its high quality oils, particularly those made from Arbequina olives. Learn how olives have been pressed into oil for centuries, at the Olive Oil Theme Park (Les Borges Blanques Parc Temàtic de l'Oli) on the outskirts of Les Borges Blanques, the capital of Les Garrigues county in southwestern Catalonia. The museum boasts the world's largest olive press, as well as 53 ancient olive trees, a collection of oil cruets from 45 countries, and a shop where you can taste and buy the local product. The Garrigues area is also the site of two other olive oil museums, the Olive Oil and Rural World Museum (Museu de l'Oli i el Món Rural), in the village of Castelldans, and the Olive Oil Eco-Museum in the tiny town of La Pobla de Cérvoles, both of which display old implements used in harvesting olives and pressing them into oil. 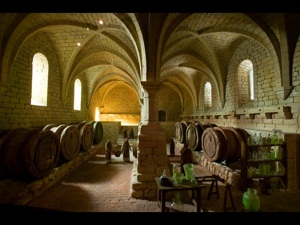 Now wash down your bread and oil with a top-notch Catalan wine. Catalonia is famous for its wines, including sparkling white and rosé cavas. To learn more about the history and methods of wine-making in this part of Spain, head to the Wine Museum (Vinseum) in Vilafranca del Penedès, southwest of Barcelona in the Penedès wine region, one of the oldest wine-producing areas in Europe. Located in the town's Gothic quarter, the museum has a unique collection of artifacts relating to viniculture and wine-production dating back to Phoenician times in the 6th century B.C. 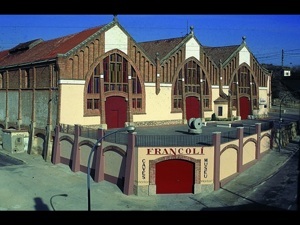 You'll also want to visit the Wine Museum (L'Espluga de Francolí Museu del Vi) in the wine cooperative located in the town of L'Espluga de Francolí, in the Conca de Barberà county of Tarragona province. Housed in a landmark Modernist building designed by the architect Lluís Domènech i Muntaner and completed by his son in 1913, the museum features three floors of exhibits on the history of wine in this area. Also in Tarragona province, the new Wine Museum (Castell del Vi de Falset) in the town of Falset, the capital of the Priorat wine region, focuses on the history and techniques of wine-making in a part of Catalonia well known by connoisseurs for its rich red wines. And in the north of Catalonia, in the province of Girona, the Wine Museum in the medieval Castle of Peralada traces the history of winemaking there from the 14th century. 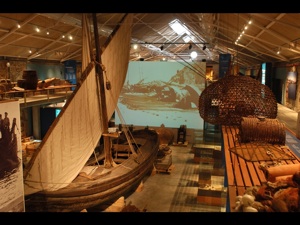 With all that alcohol on your stomach, it's time to add some meat and fish to slow down the effects.  Learn how sausages have been made for the past 150 years at the little Sausage Museum (Museu de l'Embotit) in Castellfollit de la Roca, one of the smallest villages in Catalonia, dramatically perched atop a basalt cliff in the county of La Garrotxa, west of Barcelona. You can sample and purchase local sausages here, too. If you favor fish, head for the coast and the Fishing Museum (Museu de la Pesca) in the fishing port of Palamòs on the Costa Brava northeast of Barcelona, with exhibits about the fishing industry and the huge variety of fish found in Mediterranean waters.

Finish off your regional "museum meal" with some sinful chocolates from the shop at the Chocolate Museum (Museu de la Xocolata) in Barcelona. After you've visited the interactive exhibits on the history, processing, and uses of chocolate (including the making of sculptures out of this malleable sweet, from replicas of famous buildings to Disney cartoon characters), indulge yourself with a cup of thick hot chocolate, more like a pudding than a drink, at the museum's shop and chocolate bar. You'll never be satisfied with instant hot cocoa again!

And finally, if you want to see the kinds of plates, bowls, serving platters, soup tureens, cups, saucers, and beakers from which the Catalans have consumed all these fine foods during the past 500 years or so, don't miss the superb Ceramics Museum (Museu de Ceràmica) in Barcelona, which also exhibits ceramics (historical and contemporary) from other regions of Spain.