sightseeing on mykonos: the cultural heritage of the greek island

Mykonos and Delos, the small islet on the west side of Mykonos, were well known in ancient times. They both have a really long history and a lot of references in Greek Mythology.

It is said that Mykonos was formed when Hercules killed the Titans. The dead body of one of them was transformed into a rock in the middle of the Aegean Sea, becoming the island of Mykonos. The name was given to the island after the King of Delos’ son. Mykonos and Delos played a great role not only in ancient times but also later, when Greeks gained their freedom from Ottomans. The ports of the islands were always busy as they are located on an important site for many travelling ships. Merchants and travellers brought new ideas, tools, cultures and inventions to Mykonos where the locals made good use of them and cleverly mixed them together.

Here are some of the major sightseeing points where you can take a journey back in time and look into Mykonos’ long cultural history. 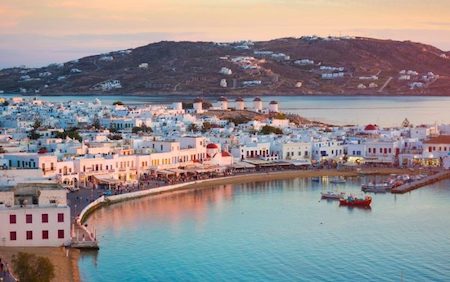 Called by the locals “Kato Miloi”, they are located near the sea, on the southeast of Mykonos Town. They are big three-story, cylindrical, white buildings with small windows and conical wooden roofs. The Windmills are considered as one of the most famous monuments of the Cyclades. Their use was for grinding cereals and today seven of them are in good shape.

The one in the most perfect condition is the Geronimos Mill, which operated until 1960 and still retains most of its equipment.

From the 17th to the 19th century, the Mills supported the island's economy by supplying pastries to ships passing through. In the 19th century there were 28 mills in Mykonos alone.

The most famous mill is the "Bonni Mill", which is maintained as a museum and hosts various activities.

Many travellers seek a private Villa in Mykonos, so that they can have a great view of the Windmills. If you are planning to book a villa in Mykonos Town facing the Windmills, we suggest that you do it early, as the number of these villas is limited.

One of the biggest excavations in Europe can be found here. In antiquity it was particularly famous as the birthplace of God Apollo and Goddess Artemis, hence an important religious center which also developed into a commercial one. If you visit the archeological site, you will see magnificent ancient remains such as the Lions Road, the Temple of Isis, the Gymnasium, the House of Dionysus and the ancient Theater. A lot of tools, pottery, statues and mosaics are kept in Delos Archeological Museum and the National Archeological Museum in Athens. Some of the findings are dated back to 3200 B.C.

Delos is an UNESCO World heritage site and staying on the island overnight is strictly forbidden. But a lot of tourists visit Delos during the day, not only to see the spectacular ancient ruins but also to enjoy some of the most natural and beautiful beaches of the area.

Apart from the Archeological Museum of Delos, Mykonos has a lot of other museums where the visitor can see in depth different parts of the island’s history and culture. The most popular museums and cultural venues in Mykonos are:

This is a really unique church, located in Kastro area, in Mykonos Town. Its construction began in 1425 and was completed during the 17th century. Paraportiani Church is one of the most photographed churches in Greece.

This impressive whitewashed church consists of five separate churches that unite: the four churches (dedicated to Saint Efstathios, Saint Sozo, Saint Anargyri and Saint Anastasia) are on the ground floor and form the basis of the fifth church. Each church has a different architectural style, which makes this venue a one-of-a-kind structure.