ON THE TRAIL OF PALLADIO IN ITALY

Venice is a city wrapped in salty water.   The sound of it is everywhere, a giant lagoon lapping and licking at a hundred islands, many of which were somehow tamed and built upon by architects like Sansovino, a friend of Titian, Pietro Lombardo and of course Palladio all of whom turned out to be geniuses and left us with buildings to drool over.

It is impossible not to like Venice, not to fall for it like a hopeless love sick teenager.   Walk through its labyrinth of narrow streets and there are palaces left and right, churches and bell towers, tiny shops and restaurants.  Cross the bridges that span the canals and you walk into sun-bathed, secret piazzas and at the ancient Rialto Market the stallholders sell fish and shellfish, fruit and vegetables just as they’ve always done.

Go to Venice armed with one of the great books on this unique city, Venice for Pleasure, and you will discover just how little the city has changed in five centuries.   First published in 1966 JG Links walks you all over the city and tells us to go to the church of San Giorgio Maggiore, one of Palladio’s great masterpieces, which stands on its own island just off the tip of Giudecca.   “We shall visit it,” he advises us, “if only to climb its campanile and see the best view of all Venice.”

So we follow his advice and take the lift to the top which puts Venice at our feet and across the higgledy-piggledy, prickly skyline of roof tops the Veneto plain stretches out to the Dolomites, glowing pink in the early morning light.

That night we meet up with Dr Natale Rusconi and his wife Connie at their charming house on the Zatteri overlooking the Giuidecca Canal.   This is where the giant cruise ships sail up and down sometimes dwarfing the city.      Rusconi had just retired after more than thirty years of running the Cipriani Hotel and it seems strange that he is no longer there.   A man of enormous charm and talent he has become a legend in the hotel world.

Working closely with James Sherwood, who bought the Cipriani as the first in his chain of Orient Express Hotels, Rusconi created a remarkable haven for those who could afford it and even those who couldn’t!   A twenty four hour launch whisks you in a few minutes from St Marks Square to the tip of Giudecca where manicured gardens dotted with pine and olive trees and a vineyard await your arrival, not to mention a blue saltwater swimming pool.

His own garden is quite a sight, tucked behind high walls, and you would think that he would be content to spend more time in it, especially since he is now in his eighties.   But no, he tells me, there are plans afoot and he is already acting as a consultant for one or two chosen hideaways. 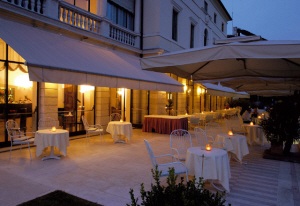 Meanwhile his son Pietro is following in his father’s footsteps.  He works in Vicenza, a 45 minute train ride away, managing the Hotel Villa Michelangelo.   In typical Rusconi fashion he is waiting for us at the station, with a mischievous Italian greyhound in tow.   He greets us warmly, as does the dog, and in no time he has our bags loaded into his car.   The hotel is a little way out of town and as we drive tantalising glimpses of stone pillars and porticoes whiz past.  We can’t wait to explore it but for now we are content with the hotel and its surroundings, for we are soon ensconced in a lovely room with floor to ceiling windows that open out on to the gardens and a spectacular view of the surrounding hills full of olive trees. 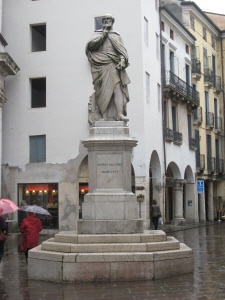 The next day it is raining but it doesn’t matter.   We have a full day to explore.   After breakfast we have an appointment at the Palazzo Barbaran da Porto to see the Palladio exhibition that everyone is talking about.   It is closed today but with the help of Rusconi junior (already he is proving to be a chip off the old block) they have agreed to let us look round and we have it all to ourselves.

Stretched out before us and centred around detailed models of Palladio’s  palaces and villas, is a wealth of material including books, manuscripts, maps, bronzes, coins paintings and drawings all relating to his extraordinary life.   The palaces of Thiene, Porto and Chiericati have fine colonnades and loggias attached.   The villas are equally beautiful.   Commissioned by noble families, sometimes as second homes, they sprang up all over the Veneto.   But these fine houses did much more than show off the status of their owners.   The splendid arcaded wings that adorn each side of the house have a hidden purpose; they turn out to be working farm buildings and although the dovecotes at each end are as pretty as they come they too have a practical purpose to provide meat for the table. 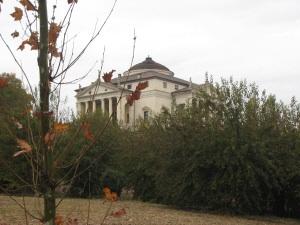 It’s fair to say that we got carried away by the story of Palladio so after spending a totally absorbing couple of hours in the exhibition which then moved on to the Royal Academy in London and is now heading for the Caixa Forum in Barcelona, we set off to find and gaze in awe at one of Palladio’s most famous houses in the flesh.   The villa Rotonda looks as though it might have sprouted overnight from the hill it sits on and it is not difficult to picture it in the hands of its original owners, boldly reflecting their status in the local community, and dominating the surrounding countryside with its dome and four loggias cleverly designed to give a complete 360 degree view of the surrounding landscape.

With more time on our hands we might have returned towards Venice and the Brenta Canal.   Here you can take a tour and drift slowly past yet more of Palladio’s villas including the villa Foscari with its Greek temple front.   Built in the 1550s for the Foscari brothers it became known as “Malcontenta.”  Some say it was named after the village it was built in but others believe it goes back to an unfaithful wife who was kept locked away by her jealous husband.   That will do for us.

The Palladio Exhibition is on at the Fundacio la Caixa, Caixaforum, Barcelona from 19th May to 6th September 2009.  It then moves to the Caixa Forum in Madrid from 6th October to 17th January 2010.