SMALL IS BEAUTIFUL WHEN IT COMES TO LONDON HOTELS

Getting to London from our home in Northumberland is easy.   We live close to a main line railway station so we can jump on any one of a number of trains that run down the east coast line to Kings Cross.   National Express, if there are no delays, gets us nicely there in about three and a half hours; if we are travelling further a field we stay a night or two before carrying on by Euro Star from St Pancras Station to Paris where again we might stay at one of our favourite hotels The Crillon.   From Paris we can journey on to all sorts of destinations throughout Europe.

As readers of Sally’s Place must know by now we are fans of the train.   The French trains, particularly the famous TGV express trains, are superb and nearly always run on time.   Italian trains can be unpredictable while Swiss trains are to die for.   We have had marvellous train trips in Norway where on one memorable occasion the train left the station in Grong without us but the station master somehow managed to throw a signal to stop it and, with our mouths wide open, watched it reverse back up the line to pick us up.   I think the other passengers thought we were Royalty! 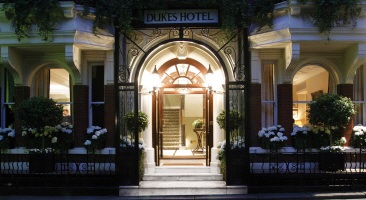 Back in London recently we spent the night at two charming small luxury hotels.   These so called boutique hotels are very much in vogue now.   The Dukes takes a bit of finding but well worth the effort!   It has fallen under the management umbrella of One Aldwych, and the magic fingers of Gordon Campbell Gray, a Scot who also owns the Carlisle Bay in Antigua and Le Gray in Beirut.  He also has plans for Rowallan Castle in Scotland and two more as yet unnamed hotels in Morocco for 2010.

We first met Campbell Gray not long after he had opened One Aldwych over a decade ago.   He struck us then as a perfectionist who lived and breathed the hotel world but he was determined to do things differently and put his own stamp on whatever he touched.  He is a great fan of modern design and when he created the bathrooms in One Aldwych he was one of the first to install special toilets that use much less water.   He is also an inveterate traveller and apparently he once considered opening an inn on the Falkland Islands. 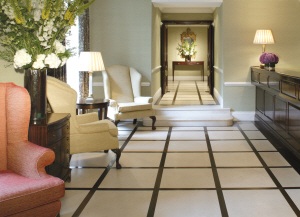 When you stay in any of his hotels you know that whatever you see and touch will almost certainly have been tried and tested by him.  Even the waiters’ aprons are approved by him.   So it was interesting to see how his fresh and calm touch had influenced The Dukes.   The ninety rooms have been upgraded and renovated to an extremely high standard and as part of our stay we had a host of extras thrown in including complimentary visits to the Health Club, steam room and 24 hour gym.

We tend to be a bit lazy when it comes to such things but the seasonal menus in the dining room offering classic British dishes were another matter.   It was late August and we couldn’t resist trying the grouse that had been shot and brought straight from the Scottish grouse moors.   This is a dish to die for if it is cooked properly.   The dark flesh of the red grouse has a unique flavour, for the birds live entirely on the heather around them and they cannot be bred for the table, or indeed reared to be released on to the shooting ground like pheasants or partridges.   The birds are truly wild and all that can be done to improve their numbers is to manage the wild moors they live on.   This is done by burning the old, stringy heather at the right time of year to encourage young growth and by controlling predators that prey on the eggs and chicks such as crows and foxes.

We asked for the roasted birds to be taken off the bone and they came with traditional bread sauce, game chips and green vegetables and were superb.   The Dukes has a drawing room and conservatory that overlooks a courtyard.   Afternoon tea is served here as was our superb breakfast.   Like most hoteliers who know what they are doing Campbell Gray goes out of his way to find the right staff and it shows.

David Levin is cut from the same mould as Gordon Campbell Gray.  He also lives and breathes his hotels.   It is in his blood which is not surprising because he started working in hotels after leaving school in Scotland.   The Levin sits within a stone’s throw of Harrods in Knightsbridge.   Buckingham Palace is close by as is the Royal Albert Hall, the Natural History Museum and the Victoria Albert Museum. 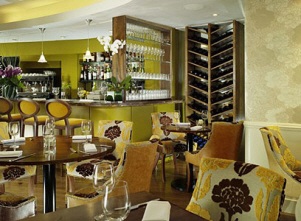 It has the distinct advantage of being next door to The Capital Hotel, another one of Levin’s hotels which he opened back in 1971 and its restaurant has two Michelin stars.  To be honest we wished we had eaten there because our experience in the Levin’s Metro Brasserie and Bar was disappointing.   The service was extremely slow and the food not up to scratch.   However, we duly reported it to the excellent manager there and I am sure by now the problems are sorted.

Otherwise we loved the setting and look of the Levin.   Based around a 1930s design a unique feature in all the rooms is a champagne bar.   They have got rid of the dreaded mini bar and replaced it with champagne!   This is very much down to David Levin himself (who just happens to have his own winery and is something of a wine buff) but it means that you can indulge in a glass of champagne or set about mixing your own champagne cocktails whenever you feel like it.  There is also an honesty bar and a library of Penguin paperbacks with a good selection of volumes dotted around each room. 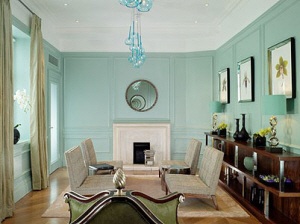 When we met up with Levin he told us all about his passion for the hotel industry.   It all started when he was a young boy.   He can remember the excitement of staying in railway hotels with his parents; everything was run like clockwork and in particular he recalls the smartness of the staff and the managers in their black jackets, crisp white shirts and neat ties.   “To my young mind they reminded me of film stars those managers and all they seemed to do was float about.   So there was a definite touch of theatre and romance to hotel life and that’s what got me interested,” he told us.

After learning the ropes and working his way up to being a general manager with British Transport Hotels he decided to buy his own pub in Berkshire in 1964.   He found it in a tiny village and barely on the map but he had great plans for it.   This was a time when all you could expect when you walked into a pub was beer and spirits.   A decent glass of wine was a world away and finding something to eat other than a bag of crisps and a packet of salted peanuts was impossible. 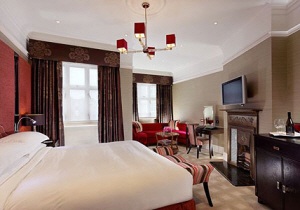 This was precisely what David Levin wanted to change.   And the only way he could do it was to have something entirely under his control.   The first thing he did was to transform the look of the place, at least on the inside.   He wanted to create a cosy but above all a welcoming atmosphere by adding simple little touches that in the end made an enormous difference.   For example he went out of his way to find sweet smelling apple and cherry wood to burn in the open fires and then he filled the place with flowers.   Next he served proper, plated food in the bar and rounded that all off with freshly brewed coffee.   It had an amazing effect.   People flocked to his little place deep in the wilds of Berkshire and the British pub was never the same again.   It sounds daft today but that was a British revolution!

Five years later Levin was tackling another shortcoming, this time in the world of the small luxury hotel.   He was determined to create a luxury property that wasn’t the size of the Dorchester or the Ritz in London.   So he went to see his bank manager and over a glass of sherry he got his hands on half a million pounds to build his new hotel in London.   The fifty or so rooms would be individual and luxurious, there would be a posh restaurant serving excellent food and he would build and design it all right down to the last detail.   Little did he know it but what he had in mind was today’s boutique hotel!   He called it The Capital and it opened in 1971.   By 1974 it had one of only a handful of Michelin stars in London and nearly forty years later he still owns it.   He now has a winery and a bakery that supplies hotels and restaurants throughout London.   And as they say the rest is history!

We wondered what he thought about the present and severe downturn in the world’s economy.   “I’ve been through so many ups and downs in my life provided you don’t over borrow you will get through it.   We have been running at about 68% occupancy from January.   So we are in profit, although during the same period last year we were running at over 80 per cent.   So we are not making such a big profit.   But it is a pendulum and it will spring back.”