america's most beautiful road: the beartooth highway in montana & wyoming

A firm rule about hiking or doing anything in the mountains is to be prepared. The weather can change in minutes, going from a sunny warm day to a snowstorm. And sure enough, that’s what happened when we drove the Beartooth Highway, a National Scenic Byway, one day in August last year. Backpacking through Montana & Wyoming is beautiful, but it definitely helps to have an experienced guide along the way. I wish we had gone that route prior to our trip.

As we left Red Lodge, Montana, the sky was blue and the sun was shining. The views as we mounted the peak, one switchback after another, were beyond spectacular. When we stopped at the Rock Creek Vista Point, at 9,190 feet, the vistas went on seemingly forever. But as we climbed higher and higher, the temperatures dropped, the sky became overcast, then a heavy cloud of fog settled on us, limiting our vision. When we stopped at Twin Lakes to explore the alpine tundra, snow began to fall. 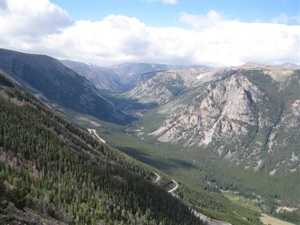 As we crested the pass at 10,977 feet and began our descent, the snow intensified. By the time we pulled into the parking area at the Top of the World store, it was a driving, blinding white-out. In the time it took to run into the tiny gift shop, our hats and jackets were coated with the white stuff. What a change, in a matter of minutes!

As we continued downhill on our way to Cooke City, the northeast entrance to Yellowstone National Park, the change was almost as sudden. We soon left the snow behind and emerged into the sunshine, with more fabulous vistas ahead and all around us.

When asked what was the most beautiful drive in the country, the late Charles Kuralt, who traveled the back roads and byways of this country for CBS television and for his books, unequivocably stated, “The most beautiful road in America is U.S. 212, which leaves Red Lodge, climbs to Beartooth Pass at 11,000 feet, and drops down into the northeast entrance of Yellowstone Park.” 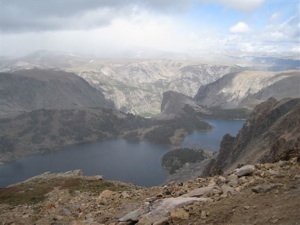 Gala festivities are planned June 10-12 in the three gateway communities of the All-American Road: Red Lodge and Cooke City, Mt., and Cody, Wyo.  Red Lodge www.redlodge.com and Cooke City www.cookecitychamber.org are the anchor towns for the route. Cody www.codychamber.org is the anchor for the Chief Joseph Scenic Highway, which connects with the Beartooth and offers an expanded loop trip.

The anniversary celebrations in Red Lodge include free barbecue and entertainment, free admission to local attractions, a community parade and more. Cooke City will celebrate not only the Beartooth Highway, but also its mining history and its position as an entrance to Yellowstone www.nps.gov/yell. In Cody, the Buffalo Bill Historical Center will present educational workshops about the flora and fauna of the Beartooth corridor.

For the latest details on anniversary celebrations and complete schedules of events, visit www.beartoothhighway.com/tripPlanning/75thAnniversary.html.

This website also offers detailed information on planning a visit to the Beartooth area, with specific driving directions from all three gateway communities. It includes a weather notice that echoes our experience exactly. “The high alpine climate ensures that severe weather conditions occur almost every month of the year. Summertime temperatures can range from the 70s on sunny days to below freezing during sudden snowstorms…. Pack appropriate clothing, including warm jackets and hats.”

The Beartooth Highway is usually closed because of snow from October through April. The shoulder months of May, September and October depend upon the weather; check with locals before setting out to verify that the pass is open. (I once left Billings on a sunny day in May intending to drive to Yellowstone by what looked like the shortest route on the map, only to discover when I got to Red Lodge that the pass was still closed because of snow. I ended up doing a long – but scenic – detour through Wyoming to get to Cooke City and into the park.)

A beautiful orphan
As stunning as the Beartooth is, it belongs to no one.  Although the route begins and ends in Montana, a large section of it is in Wyoming. No federal or state agency claims actual ownership of the highway, making it an orphan road. The ownership of the highway right-of-way rests with the Federal Government, and the Forest Service is responsible for administering the land. Maintenance of the highway itself has varied. Currently, the state of Montana and the National Park Service perform most of the highway maintenance. 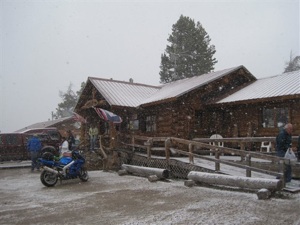 Because the road is mostly within National Forest and National Wilderness boundaries, services are limited to rest areas and interpretive sites. There is one commercial property along the route, the Top of the World store, a combination general store, four-room motel, equipment rental, and gas station www.topoftheworldresort.com. It provides a one-seat pit toilet for visitor use.

‘Na Pet Say’ in Crow language
The scenic corridor passes through part of the 920,377-acre Absaroka-Beartooth Wilderness, which was established in 1978. The Absaroka Mountains were named for the Crow Indians who inhabited much of south-central Montana prior to European settlement. Absaroka is a Crow Indian word for crow.

The Beartooth Mountains were named for the resemblance of a towering narrow spire to a bear’s tooth, or Na Pet Say, as the Crow Indians called it. More than 25 features along the route are named “Beartooth” – a lake, a creek, a waterfall, a canyon, a pass, a butte, and more. 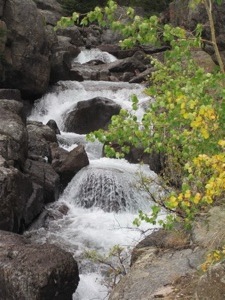 Beartooth Pass at almost 11,000 feet is surrounded by 20 mountain peaks that reach more than 12,000 feet. It is some of the most extreme country anywhere – as well as some of the most awe inspiring. Keep these extreme conditions in mind and remember to follow the Girl Scout motto: “Be prepared.”

A few other tips:

To reduce glare on your windshield and eyes, drive east to west, from Red Lodge to Cooke City in the morning, and west to east, Cooke City to Red Lodge, in the afternoon.

To help plan your trip along this scenic byway, order a copy of Scenic Driving the Beartooth Highway by H. L. James (Falcon Press Publishing, second edition). (Just google the title to find online vendors, or order it at your local bookstore.)

For more information about things to see and do on either end of Beartooth Highway, go to www.visitmt.com.