You know you have arrived in New Mexico when your cheeseburgers, croissants, or muffins have been kissed by chiles. It is very difficult to shake loose the bliss that comes from spicing up familiar foods. The reason many food lovers seldom rebel and fall in love instead is because so many of the foods like corn, squash, pinto beans and more take on an exciting new dimension, when spices are methodically added. 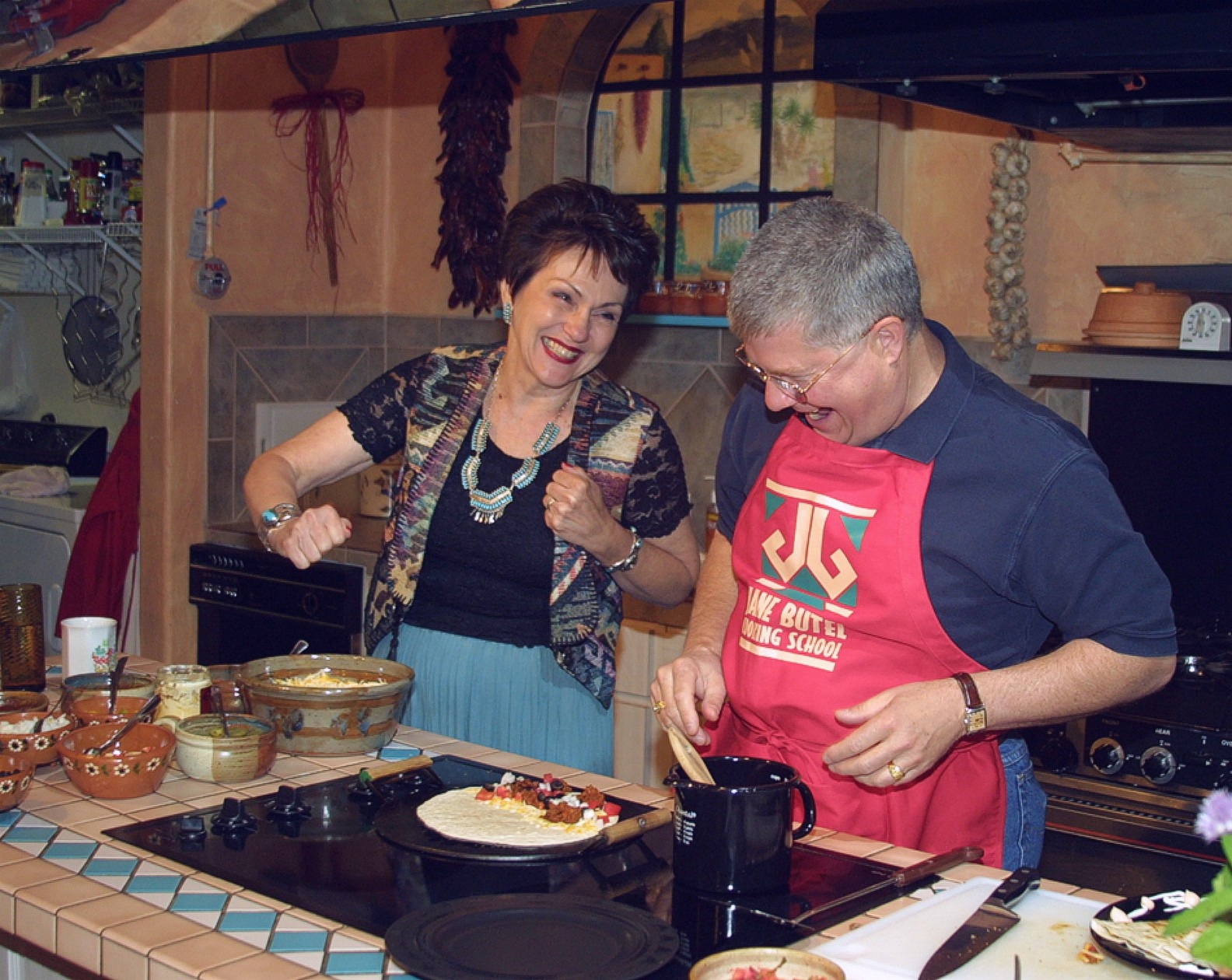 Thanks to writers and TV personalities like “Queen of Chili” Jane Butel spicing up foods have become a subject of national interest, especially if it’s a simmering pot of chili. In fact, it isn’t uncommon during preparation of this heavenly bowl of fire for some cooks to go all the way. This not only means heating up the pot, but also adding to it some untraditional extras like vegetables or pork or even seafood to give it that special lift off everyone expects when they chow down.

C.V. Wood, Jr., one of the founders of the International Chili Society, believes the secret to a terrific bowl of chili is to soak the spices in beer, then simmer them before refrigerating them over night.  The carbonation, he claims, is supposed to bring out new flavors that are otherwise hidden.

Butel in her latest book Chili Madness maintains that certain basic ingredients must be added to chili to make it special. These ingredients include the classics: pure ground red chiles, freshly ground cumin, fresh garlic and onions (never powder or dried).  If using oregano, always use the crushed or ground-dried Mexican oregano (“mintier” and milder than the Greek or Italian variety). Her meat of choice is chuck roast or beef – preferably a little fatty (80% lean) – which she likes to cut coarsely into small cubes. The onions, which she uses, are the stronger-flavored variety (such as the Spanish-type, white or yellow, rather than the sweet Vidalia and Maui); as far as the ever-popular tomatoes, she prefers not to use them, because they blunt the pure chile flavor.

While each chilihead has his or her unique way of branding their chili, the bottom line is the same: They all share the same passionate love for this bowl of fire – and will defend vehemently their favorite recipe.

According to Butel, a bowl of chili delivers more than just a bowl of oral pleasure. When prepared properly, those spicy bits of fire are filling you with nutrition (low sodium and minimal fat, high vitamins A and C) as well as unclogging the vascular system by auguring the plaque, decreasing appetite, stimulating metabolism, and even strengthening the immune system for a battle against diseases.

The source of chile’s heat is in the capsaicin, which is found in a cotton-like ball located directly inside the fruit, attached to the stem; from there the heat travels to the seeds via the main veins of the chili.  Although some chili lovers may use prepared spices, true chiliheads insist on creating their heat from fresh chiles. When it comes to flavor, the dried and packaged chiles rarely match the fresh. Reason: Packaged or dried chiles don’t survive well and their flavors have been known to disintegrate rather quickly. Also, the packaged varieties usually provide a standard flavor, which limits the taste choices that can be created from it.

For foodies, who prefer to create their chili from scratch, Butel suggests when buying chiles to note the color and the shape of the chile (i.e., the darker the color, and the narrower and sharper the point of the fruit, the hotter the chili; vice versa, of course, for milder). “While these are good guidelines,” she adds, “they’re not foolproof: since chiles freely cross-pollinate, hotness is inconsistent within species, within varieties, and even within chiles coming from the same plant!”

Regarded as an authority on regional Southwestern cooking, Butel’s reputation has crossed oceans.  A home economics and journalism graduate from Kansas State University, she is the daughter and grand-daughter of respected home economists. Over the years, through experience and education, she has built on the knowledge, which she had inherited from her family, by turning it into a profitable business.

For those, who like it hot, she offers cooking classes that go beyond just teaching techniques and providing hands-on training; her classes introduce serious-minded beginners and professionals to the healthy aspects of chili and chiles. Her teaching goal is to help students understand why chiles are so good for them – and how to mix them sensibly with other ingredients.

Another cooking program in New Mexico, focusing on the zesty flavors of the Southwest, is the internationally acclaimed Santa Fe School of Cooking. Like Butel’s program, it teaches students how to create a hot trip to paradise.

Joe David is the author of five books. The two mentioned schools are among the over 50 covered in depth in his book Gourmet Getaways. His articles have appeared in numerous publications, including: U.S. Airways, Go, Hemispheres, and more.

The influence behind this recipe came from my maternal grandfather, who when working with the Santa Fe Railroad learned how to prepare it from the “cookies,” or trail cooks.  It has won numerous chili cook-offs and is one of the really true original chiles.

1.      Heat lard in a large heavy pot over medium heat.  Add onion and cook until softened.  Remove from heat.

2.      Add meat, garlic, ground chiles and cumin to pot.  Break up any lumps.  Stir in the water and salt.  Return to heat.  Bring to a boil, then reduce heat and simmer, uncovered, 2-1/2 to 3 hours, stirring occasionally, until the meat is very tender and the flavors are well blended.  Add more water if necessary.  Taste and adjust seasonings.